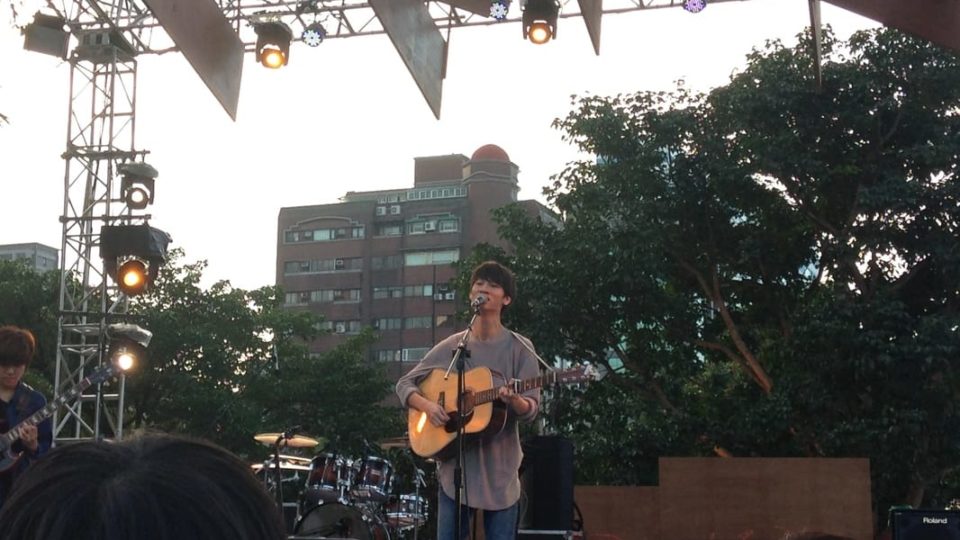 I like to think that finding Kowen Ko (柯智棠)’s music was fate at work pointing me in the right direction. I first heard him live at the Golden Melody Awards showcase in July this year, where he appeared as a special guest for his cousin Waa and performed a couple of songs (Note: This was in fact not the first time I had heard him sing; I had merely forgotten…see the post from April 2015 below. Seems that his music has passed me by more times that I can remember!).

Stressed as I was about the slew of interviews I would have to conduct right after her show, I made a mental note to look into his music later and promptly forgot twenty minutes later. The second time was at the Love Love Rock festival in November this year, where I brushed shoulders with him somewhere on the festival grounds. I had planned to catch his performance the day after, but decided against it due to the hassle of transport to the venue. The next time I saw him was at the Simple Life music festival a few weeks later, and it was this meeting which sealed the deal for me. I was on the way home from a day of performances and pondering over whether I should catch Eve Ai or Kowen’s showcase the next day. As soon as I had that thought, there he was again! Call me crazy, but I promptly decided that that was a sign that I should finally check out his music, and when I did the day after, I was-to say the least-pleasantly surprised.

He took to the stage; a tall, slight figure with a guitar held firmly in his grasp, and when he began to perform, all preconceived notions of his music went out the window. I had assumed him to be somewhat similar to Eli Hsieh, this year’s best newcomer at Golden Melody Awards who was a passionate, driven singer-songwriter who was highly adept with the guitar, but what I found was a boy with a husky, comforting voice and folk-inspired tunes which were the perfect combination of soothing and uplifting.

He began his set with his sentimental and nostalgic song ‘It was May” and followed it with “Me and my Candy House”, a song with a clean, adventurous melody that paired well against his husky vocals. Within the first six minutes of the performance, I was already doubly impressed; surprised to note that he had a sizeable, well-written English repertoire and by his musical prowess in a genre that was right up my alley. His songs were so well-written, that I disbelievingly assumed it to be a cover song, but instead was even more impressed when I found that it was all written by him, music, lyrics and all. Despite the conflicting of sounds that drifted over from a nearby event, Ko had my ears from the moment he opened his mouth to the last note of the song. Using a slight acoustic rearrangement for each of his songs, he sounded just as good as he did on his album that day.

Another reason I found his sound so intriguing was because he clearly subscribed more to British music than the normal American styles his other accomplished counterparts felt so inclined towards (You would not be surprised to know that Kowen’s idol is Damien Rice). I have always admired the clean sound and sophisticated wordplay associated with British folk music, and so was even more amazed to hear the depth within his lyrics and such an internationalised perspective coming from a born-and-bred Taiwanese singer. His meandering, world-weary vocals impressed me most in his performance of “Down oh Down”, while he showed off his versatility by perfectly executing long vocal crescendos in “Strange”.

I also especially loved the pairing of the electric guitar with Ko’s own folksy strummings. As I usually watch pop performances, it was very refreshing to see such a non-conventional pairing, especially when the electric guitar was used as a background piece to lend an uplifting, serene atmosphere to the song, rather than for some sort of screeching solo. He followed this with a stripped down, sentimental performance of a yet-to-be-released new song, so new that it doesn’t yet have a name but which caught on my heartstrings anyway, and finished the set with the strangely familiar melody of “You don’t really wish to be a drifter” and lastly the very fitting “Goodbye and Goodnight” with its haunting yet enchanting atmosphere.

If I may be perfectly candid, I wasn’t focusing too hard during his performance on technique, stage personality, or any of the things I usually take into account when reviewing live performances. Firstly, it was because I was too burned out from work, but secondly, it was because his voice and his music was too mesmerising to concentrate on anything else. That’s what good music is; the kind that allows you to lose your train of thought and throw all logical sense out the window.

Kowen’s music reminds me of the beauty that one finds in melancholy; how delectable, tangible, gorgeous it is to sit alone in a dark room and brood over life. Over this past month or so, his music has accompanied me through many ups and downs, made me cry (more than once, I might add), but essentially buoyed me through the tough times, allowing me to find beauty and make time for self-reflection in sceneries and situations that are not classically beautiful.  His mesmersing performance has sparked a obsessive cycle of repetition of his music be it day or night amongst myself and my colleagues, and I don’t feel one bit guilty for causing a new wave of the ‘Kowen Craze’. My only regret is that I missed the previous several chances to watch him perform before I left Taiwan, but I am sure that fate will draw me back to him sooner or later.  Stay tuned for my review of his album!