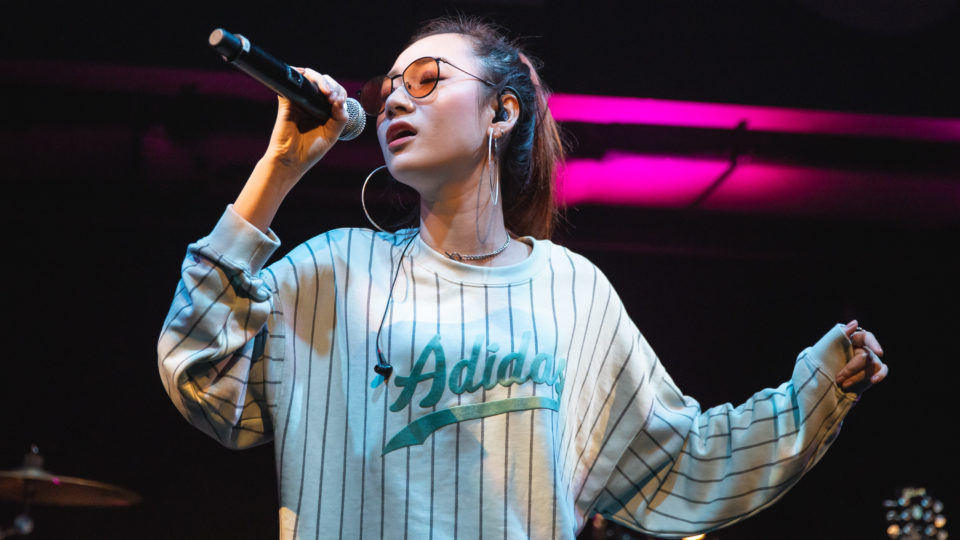 By Jocelle Koh
Photo credit: Photos by Alvin Ho, Courtesy of Esplanade – Theatres on the Bay.

On a blazing hot Saturday afternoon in sunny Singapore, I was glad for a chance to duck into the cool darkness of the Esplanade Annexe Studio, where a sizeable, dedicated crowd eagerly awaited Asian-Australian R&B artist Julia Wu’s first showcase in the country. The singer-songwriter, who skyrocketed into visibility with her collaboration with rapper Kumachan and beatmaker rgry “買榜Mybong” and her chill, smooth R&B offerings was flanked onstage by an intimate band of MC (rgry) and keyboardist (Elin Lee).

Introduced through a witty selection of puns by MC rgry (See: Julia WOOO), the leggy 24 year-old took to the stage in a Adidas sweatshirt and jean shorts, and launched straight into “事後” mixed with classic “夜晚”; grooving and shaking with the best of them. Over the hour-long performance, the singer joked with her fans about how Singapore seemed so much like Australia to her (I think someone just misses home), and shared unique titbits about her experiences in Taiwan with the audience in English.

Not only was the intimate setting a new and valuable experience for Julia, but the chance to vary her set list and sing songs of hers she had always wanted to perform also presented itself with this showcase. Other than soulfully singing pared down versions of popular tracks such as “為你我受冷風吹” and “萬年”; Julia wowed with several lesser-performed tracks of hers such as one of her earliest works “H.E.N.R.Y” with producer Terry Lee; and even threw in an acoustic set, performing lesser-known work “Sea” and a song from her first album “Need U Now”.

The latter two tracks were performed by Julia on the guitar, and as her and rgry joked onstage; previous times Wu had performed onstage with a guitar could have been counted on one hand. So as a member of the audience, and someone who has followed Wu’s trajectory for some time, this was a treat for me. Wu performed flawlessly, without a hitch. Although she had chosen to bring a keyboardist for this performance, her musicality and flow when performing alone with the guitar reminded us of the singer’s innate musical talent, wowing us even more.

I especially enjoyed her performance of her older track “Sea”; a bohemian, chill, acoustic song which transported me to a different place. Julia’s voice, though great on R&B kind of took on a different sheen when she performed this track; mellowing and taking on a lot more of a beachside feel. This was one of the moments during the performance which truly showed a different side of Julia, and had me seeing the musical possibilities for her in a totally different light. It was especially moments like these which made me appreciate the setup of the hour-long concert.

Yet another surprise planned for the audience was a collaboration with Wu’s former roommate and contestant on reality show Miss Korea; Singaporean dancer Jojo, who came onstage during a musical intermission in “撥接” to show off her rad dance moves. Her interactions with Julia, who also did a call-and-response dance segment with Jojo showed off the girls’ playful side, and truly was a feast for the eyes. Both of them followed this by dueting on one of Wu’s most popular R&B tracks “你是不是有點動心”. Although clearly nervous, Jojo sang well with the help of Julia’s lyric prompting, making this never-before-seen duet version of the song a special moment indeed.

As Julia finished off the set with crowd favourite “買榜” and left the stage, the crowd seemed more than anything appeased and satisfied with her performance here today. Whilst time was certainly of the essence with just an hour to go, Wu gave the performance her all, and seemed to truly savour every minute; long or short; with her audience. Taking her time and not rushing, Wu has the grace of a performer beyond her young years.

Although it is usual to see a young performer rushing through a set to keep time, or coming up with mindless stream-of-consciousness comments which audience members may see as ‘cute’ but I just think is unprofessional, Wu remained cool, calm, and collected, stopping time for the duration of her performance.

​Furthermore, every song on the track list seemed to be handpicked for this performance, and to engage more closely with the Singaporean crowd, showing Julia’s enthusiasm to be performing here for the first time. It is not often that Singapore as a crowd is shown the affection that they deserve. Often, I feel that the tours here are a little more of an afterthought, or just something that’s along the way. But not for Julia. The thought and heart that went into this performance is not one I will forget anytime soon, and for that, Julia and her team deserve yet another WOOO!