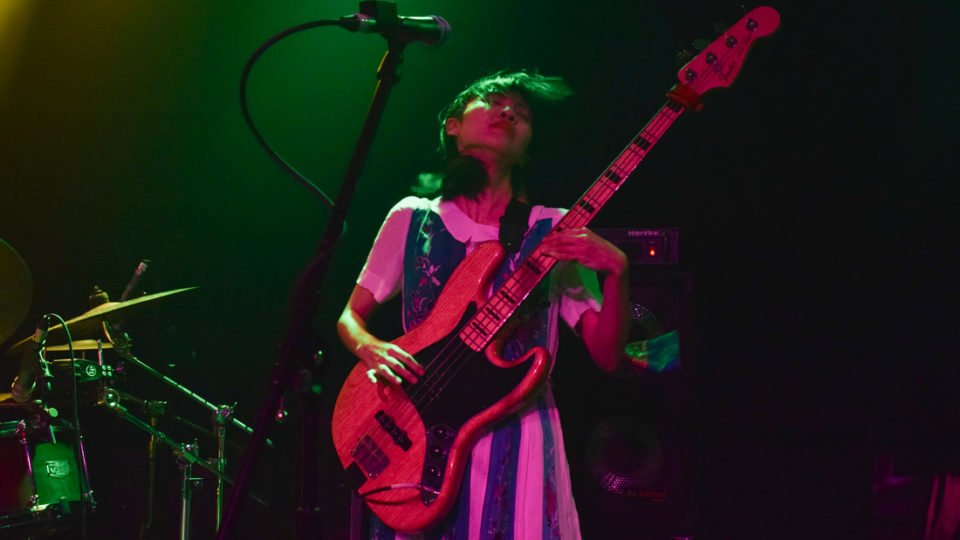 Wedged comfortably amongst a securely packed crowd at Singaporean live venue DECLINE, I amongst an audience of the island’s most frenetic Math Rock fans eagerly awaited the main act of the sold-out night: Elephant Gym. A math-rock band from Taiwan whose unique take on the genre has earned them a steady following worldwide; the three-piece band were in town as part of their ambitious world tour which is due to continue on until the middle of 2019.

Kicking off the night with local post-rock instrumental band Hauste, the band emerged unassumingly from within the audience and proceeded to play their set; peppered with exclamations of adoration for Elephant Gym and hints of their introverted wit. Matching their vibe with an array of songs featuring frenzied cacophonies of sound and lighter, tropical licks in equal part, they did well as a mood-setter. Some of my favourites include their quirkily titled ‘Church Friends’ and the aptly placed ‘I’ll Never See You Again’.

Then it was time for Elephant Gym. Given the space restrictions, there was no curtain to give the band privacy whilst they set up. And although the venue did announce instructions for the audience to clear the space, most were unwilling to give up their ‘chope-d’ space, preferring to examine intently as the three-piece band diligently checked and set up their equipment. It was bassist KT who took to the stage last during their set-up, and elicited the most cheers from the audience when doing so. Dressed in a vintage green and white frock and a bandanna adorning her head, the petite bassist marched onstage holding a bottle of beer, taking swigs occasionally to the audience’s amusement.

Starting off on a groovy note with one of their most popular tracks ‘Midway’, psychedelic feels infused the crowd as Tu’s drums pushed the song forward, strong and steady, while Tell’s angular, funky guitar licks gave the song bite. KT’s vocals wafting clean and clear across the audience guided their ears towards the second half of the song which was delectably grounded by KT’s bass. Having locked the audience into this rollercoaster ride with their inviting opening, the Kaohsiung-born trio launched straight into another one of their earlier tracks ‘Finger’, and that’s when things started to get a little crazy.

Rapid-fire licks on the bass delivered confidently and with aplomb by KT kicked the song off, before filling and building the sound into to heights that I have never before seen, not only musically but also through the band’s musicality and stage charisma. Graduating into an organised chaos that saw the band furiously and fervently banging out on their respective instruments, seeing Elephant Gym perform in person was a pleasure both for our ears and our eyes. Best moment was when KT head-banged until her bandanna and earring fell off, before launching into an improvised crazy thrashing on the bass, which had the audience reaching their fever pitch just six minutes into the show.

The band spent the rest of the night playing a selection of songs both new and old from their repertoire such as the clap-happy ‘Spring Rain’, the conflicted ‘Underwater’ and the abstract yet uniquely textured ‘Half’. Sharing stories and swapping anecdotes in a comfortable mix of Mandarin and English endeared the trio greatly to their audience, rendering their performances of these songs even more special and meaningful. Infusing not only influences from the Math-rock, but also Post-Rock, Jazz and other genres into the performances of these tracks made it even more of a visual spectacle. It was especially great to see the communication, both spoken and unspoken that went on onstage between the three band members. A turn of the head, smile in each other’s direction; it all felt so special in this intimate setting. An equal atmosphere of respect ensured that each band member knew when to give, when to take, how to build on their instrument’s uniqueness or to leave space for the others.

Elephant Gym showed that they were in equal parts experienced musicians and showmen, as they naturally interacted with the crowd throughout the night. KT started her first monologue of the night off with an endearing English script she had prepared to explain the concept of their new album ‘Underwater’ to fans, but showed her more playful and raucous side soon after, when a couple members of the audience jokingly shouted ‘just speak in Chinese’, to which she responded: ‘shut up, shut up, shut up!’. Her brother and guitarist Tell, whose passion for music was exceedingly evident spoke earnestly, endearing himself to the audience in spite of his sister’s wicked jibes. Drummer Tu is a stoic man of few words, or so we thought until he and Tell began a hilarious cycle of trying to explain the origins of their lo-fi song ‘Moonset‘ from the latest album (which has both a Mandarin and Japanese version) in English, exposing the drummer’s quirky sense of humour. It’s okay guys, we know your English is great.

Pressed up close to the middle of the stage, a sure-fire highlight of the show was bassist KT’s electrifying stage persona. Her instrument pressed tightly against her; eyes closed and fingers swiftly finding their place amongst the frets, it was such an amazingly cool juxtaposition to see a dainty girl perform so handsomely and command the attention of the crowd in a way that other male performers of her technical calibre could not easily accomplish. With sweat running down her face and a bottle of beer in hand, she’s a modern-day feminist guitar (sorry, bass) hero if I ever saw one. Balancing fearlessness with musicianship, the pint-sized power spent one of the band’s final songs balancing precariously on a small speaker that was the only thing separating her from the audience, before jumping down into the mosh and giving it all she’s got.

​​Yet the show certainly would not have been the same without her impressive band members who controlled the atmosphere of the venue with every strum and clash. Articulate, precise, and focused, it is no wonder that drummer Tu is so well acclaimed within indie circles; having been associated with bands such as Shallow Levee and The Fur. On the eponymous track from their latest album ‘Underwater‘, it felt as though Tu was truly helping the listener navigate the murky depths of undiscovered waters; speeding up, slowing down and responding fast to any obstacles in the way. There’s a bit of a mad scientist underneath his silent, stoic nature, I can just feel it.

While guitarist Tell’s ability to switch fluidly between instruments (guitar, piano, vocals) and bring the best out of the guitar reflects his cohesion skills. By filling the gaps and adding texture to each track, he takes the band’s sound to the next level with his quiet confidence. ​I especially enjoyed his input on a track from their latest album ‘Quilt‘. Dreamy, hazy riffs that mingled with the moodiness of the venue and buzz from the microphones; the cleanness of the recorded version was replaced with a heady ambiguity that I especially enjoyed. The gentleness of his vocals and the beauty of his instrument truly stood out to me here.

Despite this being the band’s third time in Singapore, the sold-out nature of their concerts is reflective of their niche pull and ability to bring something new to the table with each live performance. Having seen the band live twice before; once in 2014 at Yoga Lin’s concert (their first taste of a mainstream audience) and again in 2016 at a Simple Life festival in Taipei; their ability to innovate and deliver world-class performances in venues big or small is indomitable; and seems to be constantly and exponentially improving year after year.

​With the electrifying, always refreshing spirit of math rock as their base, Elephant Gym has managed to use the genre not as a category to restrict themselves; but as a jumping board off which they can create new permutations of music that break the boundaries; both musically and culturally time and again. Even as someone who can certainly not claim to be a connoisseur of the math-rock genre, seeing Elephant Gym live was nevertheless an accessible performance for anyone to appreciate; as long as they go with an open mind and heart. Here’s to hoping they come back to Singapore soon, and continue to inspire with their live tour all around the world.