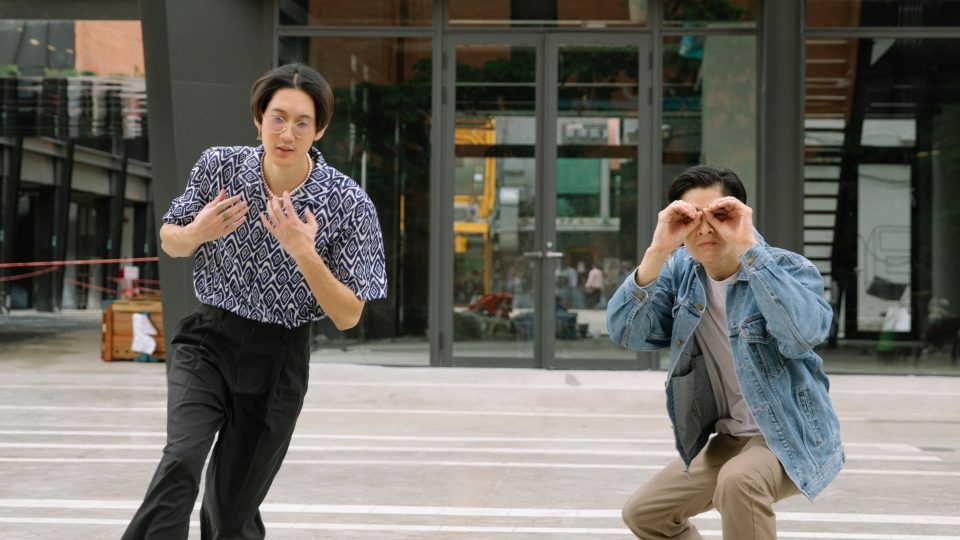 Breaking the Spotify algorithm with their groovy, slightly unhinged and kooky brand of Soulful indie-pop, Thai duo HYBS has been on everyone’s minds lately.

Bursting onto the scene in 2021 with their first single “Ride”, a mellowed tune with guitar licks that make your heartstrings curl, Alyn and Karn capture the zeitgeist of the Thai indie music scene in all its soft vibrancy and (sometimes) weirdness.

Inspired deeply by The Beatles and Prep’s soundscapes, HYBS reminds us of Sunset Rollercoaster’s sonic essence, Phum Viphurit’s calm vocals, but with a touch of disco, city pop alongside a sprinkling of humorous “slice of life” references which are all their own.

We spoke with the effortlessly talented duo about their steak-fueled creative process and what makes them tick.

Q: Could you both introduce yourselves to our audiences?
A: Hi! This is Alyn and Karn. We are HYBS!

Q: Congrats on the release of your debut album ‘Making Steak’ – did you guys always expect to have such positive reactions from audiences to your music when you first started releasing singles?
A: We made the songs based on what we loved. It may sound a little bit cliché, but we tried to keep it as simple as possible, which we didn’t actually ‘expect’ reactions.

Q: You guys have such an offbeat, loose sense of humour that attaches itself to your music on songs like ‘Making Steak’ and ‘Dancing with my Phone’. What is the perspective that you guys have when writing music for this project?
A: When we wrote our songs, they mostly came out of nowhere. Maybe the humor came from what we normally do or say in real life. Let’s put it in a way that when something doesn’t make sense, it won’t have to be.

Q: What are each of your favourite songs on the record and why?
A: Karn – Would you mind > I love the ‘easy-listening’ vibe of this song.
Alyn – Prettiest to me > Because this song was written based on my story 🙂

Q: Was it always the plan to lead up to the release of ‘Making Steak’? Tell us why the album has such a title and how it relates to what you want your audiences to feel when listening to your music.
A: Actually ‘Making Steak’ came from the activity when we make music. We normally have some juicy steak before our music session, so we want our audiences to, somehow, feel the mood when we carefully pick our meat til the final outcome of our steak!

Q: How did the two of you meet and start making music together? Was there a certain chemistry that was there from the beginning?
A: At first, Karn had his ‘Instagram reels’ project that he would invite singers to jam with his music. He invited me and things worked out! So we decided to come up with a duo band called HYBS.

Q: Could you share some of your influences?
A: The Beatles! They are the band we worshiped since young! And also, Prep!

Q: How do you work together now when co-writing, splitting parts, producing the tracks?
A: We tried working remotely once and it didn’t work out well. So we set our standard that every song should focus on ‘vibes’, so vibing together and making music together is totally our jam!

Q: As a Thai-based duo, it’s quite interesting that you make music solely in English. What was the reason for it?
A: It’s our vibe. Haha. Actually Alyn is more comfortable writing in English and we normally listen to songs in English, plus, the world is connecting, we guess it’s going to be okay if we try to do what we feel most

Q: With millions of people listening to your music on Spotify, you’ve reached people all over the world. Would you guys be open to reaching more markets in the future, and touring perhaps?
A: We’ve come so far since the first day we released ‘Ride’. Truly appreciated all of you guys for tuning in and falling in love with our music. We are not in a rush. If we could connect to more fans around the world, we’d definitely go for it.

Q: Please share what’s next for you both!
A: We’ve got a couple collaborations that we think our fans are going to love it. Coming real soon!