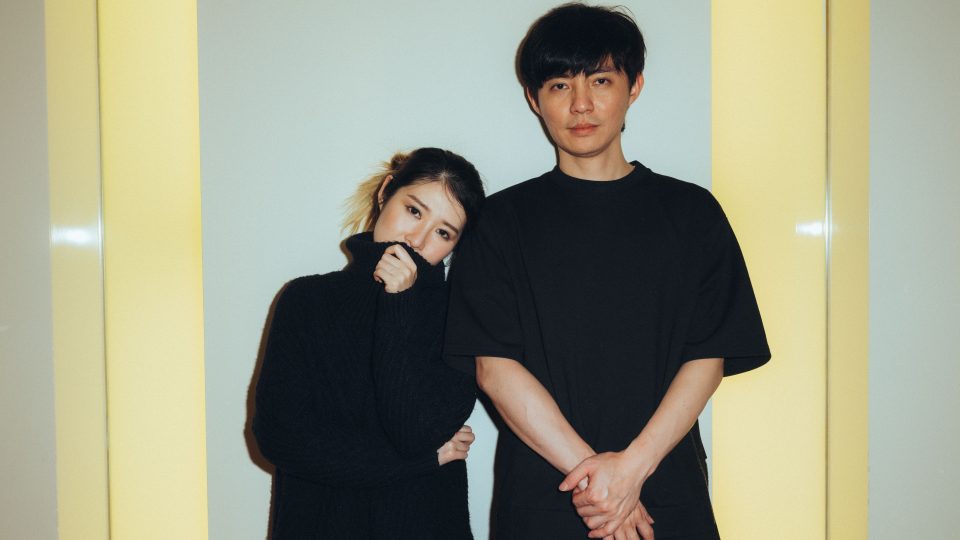 Q&A with Chick en Chicks: Not Your Average Electronic Duo

Bold, unconventional and with a larger-than-life sound, Mandarin electronic duo Chick en Chicks were the group that were never meant to be. A project started by synth musician Mr.G as a solo project, Kartina came onto the scene as a featured singer, and that was that. With songs that explore themes such as the superficiality of modern society and keyboard warriors with dazzling tongue-in-cheek wordplay, the duo are wildly different from your average Mandopop electronic act.

We had a chat with the duo to find out more about their beginnings, and what inspires them in creating their unique, progressive sound.

Q: In one sentence could you introduce chick en chicks?
A: Chicken and Chicks, a duo of extreme hybrids.

Q: What’s the story behind your band name?
A: Mr.G started Chick en Chicks as a solo DJ project, it was intended to feature different female singers, but ended up being stuck with Kartina, haha.

Q: Can you tell us a little about your debut album “Beat Maker”? What was your message behind the album?
A: ‘Beat Making’ has the same pronunciation as ‘cheating’ in Chinese. When we’re committed and focused on working on one and only thing we love, it’s often that we get detached from the reality, and as time goes by, you’ve been working on this same thing over and over again, it’s easy to be overwhelmed and get lost between ‘cheating’ and ‘determination’, eventually you realised that your sense of judgement is only valid for a certain time period of time, but time has already moved on…You know what, our lives haven’t changed one bit after GMA, we’re still doing the same thing over and over again everyday, exactly the same as it was when we were working on ‘Beat Maker’.

Q: You guys have a very unique sound that’s dynamic, funky, big and electronic based. How did you land on this sound?
A: Playing live is also very important to us, we wanted to look for another way to play electronic music live other than a DJ set. It took us a while to figure that out. ‘Camel Toe’, ‘Go away’ and ‘nananana’ were the very first songs we wrote, then we had ‘Hamilton’ and ‘September 9th’, that’s when we started being heavily based on playing with synthesizers. We experimented with a lot of different sounds, layering with bits and bobs and used whatever that we thought sounded good and felt good to play live.

Q: We hear that Kartina is a bit of a third culture kid, having spent time in America and England. How does this influence your perspective and songwriting process?
A: I didn’t spend much time in the states haha, I spent more time in Hong Kong when I was a kid. Since I can speak Cantonese as well, I have the advantage of fiddling the lyrics around and making silly puns with 3 different languages, it’s the little trick I use when I run out of lyrical ideas, because i suck at writing lyrics.

Q: You switch flawlessly between English and Chinese in your lyrics. How does using both English and Chinese best express what you want to say?
A: A lot of the time I switch between languages in a song simply because of the melody, when some melodic ideas don’t really fit in with English, I’d switch to Chinese. English is more of a rhythmic language so I find it a lot easier to integrate into my melodies, especially when it comes to a top line with riffs and runs.

Q: I heard that you also include field recordings into your arrangements which is very interesting. What kinds of field recordings do you do and how does this add to your sound?
A: Most sounds we recorded were from the toilet, ‘dropping toothbrush into a cup’ and ‘water running in the tap’ etc.,. When we talk about choosing a ‘sound’, it comes to the subject of ‘relative and absolute’, we didn’t intentionally look for the best sounds in the shortest time as we would usually do, instead we waited for it to come naturally to us. Take sample packs as an example, there many sounds out there where you can download and add to your music but we felt that it would sound staid and formulaic and we wanted to do something more interesting than that, but we didn’t know what was ‘right and wrong’ either- to be honest, we still don’t, we don’t even know if there is ‘right and wrong’.

Q: Are there any artists who particularly influence your works?
A: We were very much inspired by musicians like Noga Erez, Marian Hill and Jack Garratt on how we want to establish ourselves as musicians.

Q: What was it that drew you both towards a career in music? If you weren’t musicians what career path would you both have chosen?
A: It just came to us naturally, both of us started learning to play the piano at a very young age, Kartina started singing and classically trained at 7 and Mr.G started learning the guitar and songwriting in highschool.
If we didn’t choose to be in a band, we’d still be doing music related work, it’s the only thing we can do anyway, but if we aren’t music performers, it’ll probably be music education for Kartina and music production for Mr.G.

Q: If you were to pick one song to introduce your music to overseas audiences, which would you pick and why?
A: September 9th, it’s my favourite track of the album, but Hamilton’s music video is very well worth watching!

Q: Since you both have reached a milestone few have achieved (winning the golden melody awards), can you share any personal milestones that lay ahead for you now?
A: Getting into the habit of working out regularly would be a very significant milestone for the both of us haha, we’re just so unfit and can get tired very easily after one gig.

Q: What’s next on the cards for both of you?
A: We are currently working on our second album, hoping to release by the end of this year, the progress is slow but we’re very happy with our production quality so far, it might be a surprise to many people who stereotyped us as an electronic duo.

Never one to stay in place or to follow tried-and-true routes of creating music, Chick en Chicks challenge the boundaries of electronic music and sound in general to create funky fresh beats and vibrant live presence. Many of their records speak about the things that are forever on our minds; but rarely uttered out loud.

The frustration we feel at two-facedness, our anxieties about being who we truly are, and that innate need we all have to just let loose and enjoy life…it all plays out so brilliantly in Kartina and Mr G.’s quirky creations and at least for that moment leaves us feeling free and impulsive. We can only hope that they continue to regale us with more music soon, so that we can get our next fix.