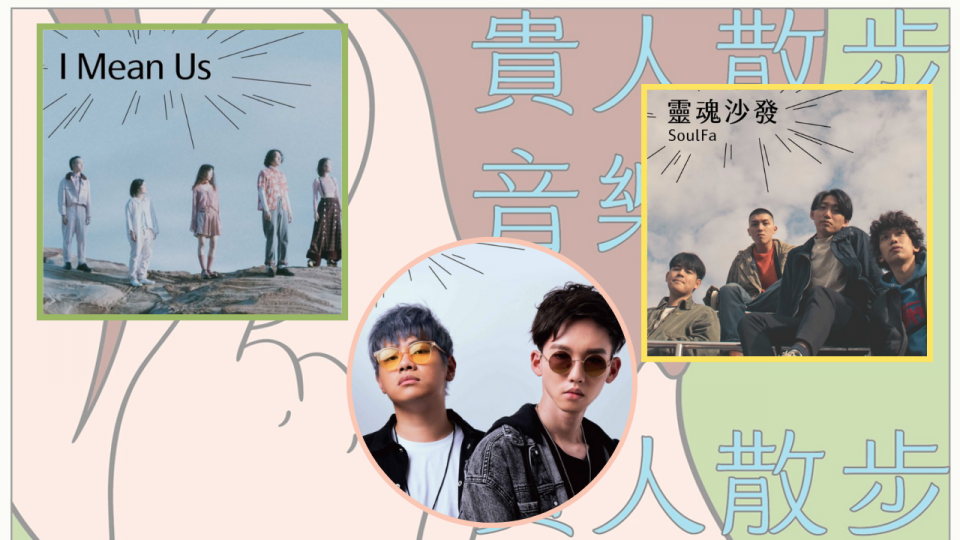 At the end of this month, LUCfest, the festival for lucky people will take place in the southern city of Tainan, Taiwan. Featuring an eclectic mix of well-established and upcoming indie music artists, writer Sinead picks out a selection of players to look out for. From dreamy indie acts to Buddhist metal, even in Covid times, LUCfest promises the best of what Taiwan’s local scene has to offer; to listeners at home and beyond.

True to their name, SoulFa靈魂沙發 describe their music as a ‘couch for the spirit’. Blending summery melodies with a pared-back audio landscape, their sound gives off strong lazy Sunday afternoon vibes. Made up of vocalist Benshan本山, guitarist poo poo, bassist Henry亨利 and drummer Look (who also heads up percussion for Bestards理想混蛋), since releasing their first album, SoulFa, back in 2019, they have been slowly drip-feeding us with new singles to keep us going through 2020.

As the weather grows colder, gentle guitar melodies and bouncy tambourine sounds make the band’s latest offering “Summer Naps夏日午睡” the perfect song to conjure up picnic weather. The swirling melody picked out on the electric guitar in “Daydream on sofa沙發上的白日夢” recalls the early 2010s vibes of Two Door Cinema Club, while the lyrics offer a sun-kissed lament to the beauty of nature. Finally, check out Hear Hear, possibly one of the most romantic songs of the last year. The impossibly catchy descending hook tops off a stripped-back serenade on the simple promise of a relationship: “I’ll hug the/you of yesterday/and today”.

Electronic duo G5SH are a rare sight on the Taiwanese indie scene, with their roots firmly planted in the EDM scene. A duo since graduating from university, in 2019 M.A.T.H and LuuX were selected by dance music giant Alan Walker as the only Asian group to take part in his Play Remix album, cementing their status as frontrunners of the genre in the region. This reputation has clearly not gone unnoticed by other musicians, with their latest album, Project Krane, featuring an incredible range of collaborations, from Evangeline 王艷薇 to fellow LUCfest attendee Limi.

G5SH’s secret weapon is arguably their ability to synthesise elements from other music genres into their own. See this in action on their breakout single from last year, “Back to Heaven舉刀自盡” (featuring Goat莫宰羊, also a LUCfest performer), a Dubstep influenced track offering a surprisingly contemplative on the genre, questioning how we judge other people’s life choices. To see them layering the unmistakable rock tones of Marz23’s vocals with a glitchy baseline and futuristic audio soundscape, check out their collaboration on “Let Go Of Yourself放過自己”. And confirming that they have worked with practically anyone who is anyone, see them interpreting the laidback R&B sound of Julia Wu吳卓源 on their track “Take Me For a Ride兜兜風”, mixing her signature sensual notes with G5SH’s own EDM energetic beats.

In their five years history, I Mean Us has been steadily making their presence felt on the indie music scene in Taiwan and beyond. Boasting a quirky mix of electro- psychedelic and dreamy-indie pop vibes, I Mean Us were scheduled to play at the South By South West festival in 2019, as well as being shortlisted this year for Best Alternative Single the Golden Indie Music awards in Taiwan.

So what is it about their music that has entranced so many people? It’s something about the simultaneous familiar and unfamiliar quality of their sound. Take “E.D.E.N”, their latest release. This five-minute pop song doubles as an audio odyssey, with jaunty indie beats overlaid with an ethereal falsetto melody, which at one point cuts into what appears to be Mongolian throat singing. Elements that seem jarring on paper are confidently and seamlessly woven into an epic audio tapestry.

Or what about “You So(Youth Soul)”, from their first album, OST. Reminiscent of the indie-pop style popular in South Korea these days (I’m thinking SURL), their signature dream-like sound blends with retro synthesisers and a pounding guitar line, combining a modern electro-feel with a throwback to the past.

And now for something completely different! What happens when you combine Buddhist sutra’s with death metal music? That is the question that Dharma 達摩樂隊 seek to explore through their songs, which do just that. Mentored by a Buddhist master in Taipei, the members express the ‘metal’ side of Buddhist scriptures with their high-energy, high-octane takes on the teachings of the Buddha.

Starting off with traditional chanting and bell ringing, “Bhaisajyaguru” quickly morphs into rip-roaring mix of clashing drums, rasping vocals and screaming guitars. However, as might be expected, there is a deeper meaning behind it all – the songs is a recitation of a mantra said to help ill patients recover from their sickness. All in all, Dharma offers an unexpected but valuable new take on the genre.

LUCfest is taking place in Tainan from 27th-29th November 2020. Find up all about the lineup here and ticket information here.