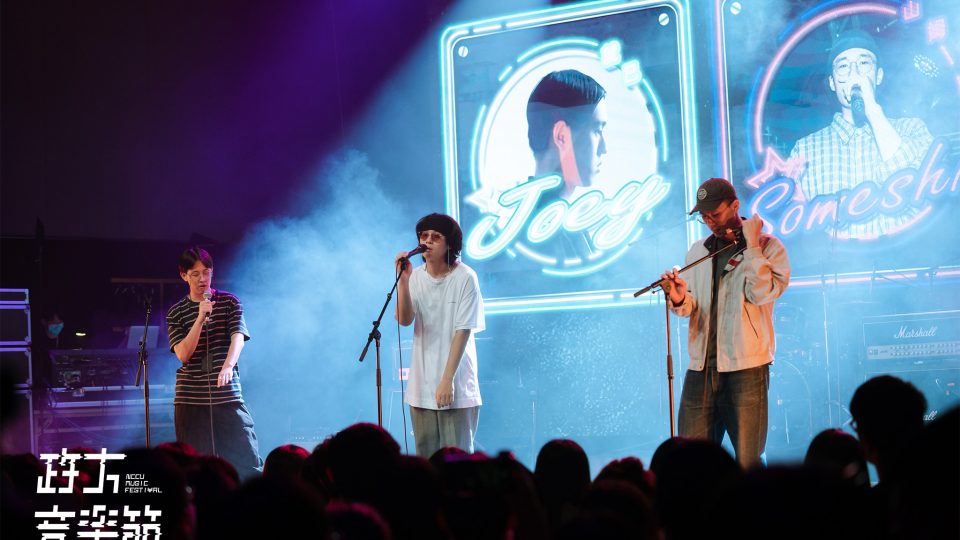 The new buzzword going around in Taiwan is ‘revenge spending 報復性消費’. After months of staying inside under quarantine measures, thanks to the stellar work done by the CDC (Centers for Disease Control), slowly everything is reopening, and everyone is looking for an opportunity to spend all the money they couldn’t over the first half of the year.

It was at this moment that news of the NCCU Music Festival政大音樂節 popped up, signaling the long-awaited return of live music shows to Taipei. After a quick look at the set-list I was sold. An eclectic mix of upcoming indie bands, NCCU alumni and Taiwanese rock, it offered an opportunity to see both new and old talent in one of the first festivals not only of the summer, but of the year.

NCCU, otherwise known as Chengchi University, is one of the top universities in Taiwan, famously situated halfway up a rather inaccessible mountain on the edge of Taipei. Luckily for us, the festival was not held there, but instead in a windowless but very well air-conditioned performance area in Guanghua Plaza, the electronics mecca of Taipei.

After making our way through a couple of floors of anime exhibitions and video game sellers, we reached the small band of students organising an impressively slick operation, who ushered us through. Of course, there were a couple of new additions to the festival – a pre-entry COVID questionnaire and mask wearing inside the building, which would have made the CDC proud.

The crowd inside was made up mostly of students, or those around student age, with a room that was full but not to bursting. The running of the sets themselves was very professional, with the time between the acts filled with a mixture of pre-recorded interviews and follow-up on-stage games hosted by MCs who did a good job of getting the whole crowd involved. Apart from the audience, it would have been hard to tell it was a university festival.

Arriving once the festival was already in full swing, we managed to catch the end of the dreamy soundscape of Modern Cinema Master當代電影大師 (after spending several minutes deciphering their logo). The stunning layering of sounds combined with the intensity of the performers made for a captivating set, if perhaps sometimes the sense of audience interaction was sometimes somewhat lacking due to the absorption of the band in their own musical landscape.

Next up was what was billed as a “Healing Hip Hop Special療愈系嘻哈特調”, which brought together rappers Osean吳獻, Joey 就已 and Someshit 山姆 together for a special stage. There was a strong start from Osean吳獻who debuted his new single ‘For a While我們只在地球住幾晚‘, with his understated delivery melding with the summery lo-fi beats. From then all three came on in different combinations, featuring on each other’s’ songs while also having a chance to perform their own solos.

Osean吳獻 appeared by far the most comfortable on stage, acting as somewhat of a frontman for the trio, with the other two a little more hesitant on stage. However, one of my personal highlights was hearing Someshit山姆 performing his most famous track to date, ‘All those guys who told me to stop smoking are already dead那些勸我別抽菸的人都死了‘, a song which was clearly a crowd favourite.

Later on it was time for Fool and Idiot 傻子與白癡, a band clearly anticipated by the audience if the cheering at their pre-stage interview and shouts of “I love you Eric Tsai” were anything to go by. They came out into an atmospheric stage filled with dry ice and mood lighting, but the effect was slightly spoiled by some technical issues in the middle of the song, which meant a runner was fixing the height of the microphone while main singer Eric Tsai蔡維澤 was singing the chorus.

He broke the tension when it came to introducing themselves, joking to the fans at how hard he was trying to pretend that there was nothing was going on and telling us how nervous the band was as this was their first live performance since the COVID crisis began. As they progressed through the set these nerves remained latently evident, with all the members putting in so much effort that it sometimes came along as a little strained. However they all relaxed into the final song, a more upbeat rendition of ‘Dear You你終究不愛這世界’ which finished the set on a high.

Then came the two most anticipated bands of the night, starting with NCCU alumni Your Woman Sleep With Others 老王樂隊 who came on to the huge excitement of the crowd. Performing a rip-roaring set through both new and old classics, they brought the energy of the crowd to a new high, especially with their ending performance of the stadium anthem of ‘Enjoy安九’, written about their first year as undergraduates.

Interestingly, they had also invited an artist to perform alongside them, who with the help of a projector and glass tray created unique images out of ink, sand and water that were projected onto the back of the stage as they performed. Although initially distracting, it ended up creating a unique artistic moment, combining audio and visual art in one.

Finally it was time for the headliners Fire EX.滅火器 who stood out immediately in the line-up for being the performers who have been going for the longest, with their twentieth anniversary coming up later this year. However, from the start the lead singer Sam楊大正 instantly connected with the crowd, saying how much they liked playing for NCCU and how happy they were to perform again after so many months.

From there they launched into a crowd-pleasing mixture of Taiwanese and Mandarin rock anthems, creating a frenzy of excitement which led to an intense but short lived mosh pit. After being roared back on for a final encore, they previewed the news, now announced, that they will be having a concert in the end of August with their label mates to celebrate five years of their record company, which clearly pleased the number of loyal fans in the audience. Their energy and the responding energy of the crowd added a buzz of energy to the end of the night.

Overall the slick overall performance and clearly detailed planning of the organisers along with a varied roster of bands and audience desperate to listen to their favourites live, I came away with a whole load of new songs to listen to and a lot of appreciation of the difference it makes to be able to see a band in person. Hopefully the situation will continue to even out across the world, and festivals will come back stronger than ever in future.