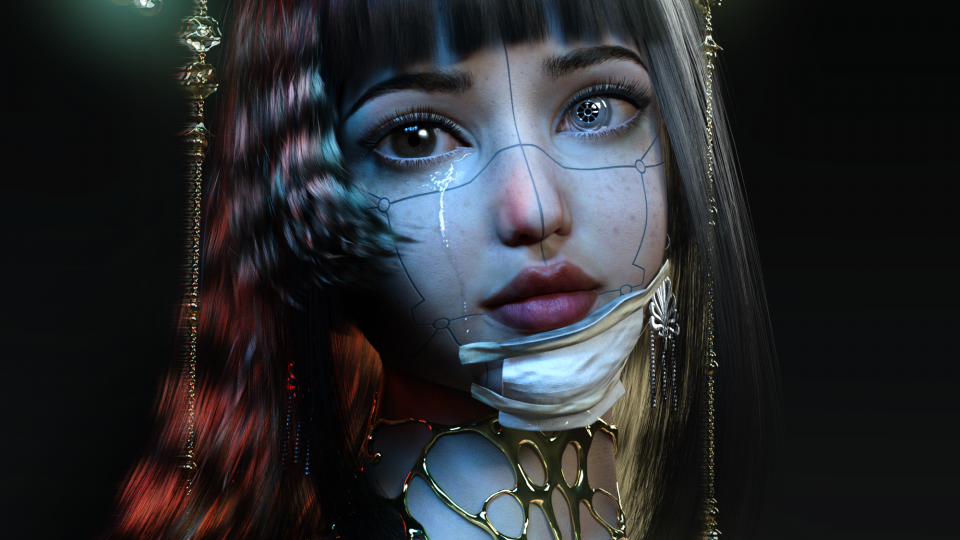 It’s hard to discern where up-and-coming artist RUBY 9100M is from, or who she is. But the real question this virtual artist and her music provokes is: ‘does it really matter’? Part of an experience curated by label Avastar (headed by the brilliant minds at Club Media), RUBY has long been a rising star in her own right.

Counting Grimes, Jackson Wang, Nike, Fendi, Moncler and now Adidas (who she’s just launched an exclusive sneaker with) amongst her collaborators, the virtual artist has become a prime example of how technology weaves itself throughout our lives, and how the virtual can be harnessed to provoke self-awareness and curiosity about the unknown.

We had the pleasure of speaking with RUBY and getting to know her a little better in terms of her personality, her music, and most importantly what she stands for.

Off the back of her debut single release ‘Screaming’, we asked the avatar to share a little about the song and what it means to her.

“This song is the first song I’ve ever released. It’s meaningful to me cuz it’s produced and written by my husband Doughboy, who understands what I’m doing the best. And it’s the first time Ruby expresses herself in sounds instead of just visually.”

Previously entering our screens just as a hyperrealistic virtual figure, RUBY’s story continues to unfold with her haunting dream-pop single ‘Screaming’, a song that gets real vulnerable real fast.

“Screaming is actually a statement of my personality and the way I see myself in this world. I’m a loner who chooses to stay in my own little world but deep down I scream a lot because I don’t want to show my excessive and exploding emotions. The production took about 5 months when Doughboy first made the beat and we recorded it. We added and removed quite a few things to make the atmosphere more hollow.”

With lines like “I be walkin’ down this path when half my brain is missing/They try to tell me what they think is right/I never listen” and “The old me had to die now my soul has woken“, the angsty lyrics are reminiscent of that episode of Rick and Morty where Rick clones a teenage version of himself who tries (unsuccessfully) to repress his anguish at being stuck in the wrong body. If you know, you know.

And while the song reads woke Gen-Z singer-songwriter, something about the delivery and RUBY’s perspective feels different. The curious artist also doesn’t shy away from questions about her identity; alluding to the fact that she’s not human in the lyrics for ‘Screaming’ but also referring to the experience of the awakening of her soul.

The intentional blurring of lines between the actual and virtual is fascinating to see at work, both within RUBY 9100M’s works and during our conversation. When asked about the importance of finding ones’ own path and learning to evolve, the virtual artist showed that we flesh-and-blood humans could certainly learn a thing or two from her.

“Evolution is inevitable and important for a person to improve and reflect. I’m the kind of person who is not afraid to make big changes nor to stay in my comfort zone. When we hold on to the old strings, we would not be able to open up our minds. And I guess I’m born this way :)”

Surrounding ourselves with things that make us comfortable, in environments that are familiar is what many of us call ‘human nature’. Yet it’s interesting that these flaws do not apply to RUBY, making her an aspirational yet authentic artist in many senses. By breaking free from the boundaries of ‘human’ limitations, RUBY encourages us to see beyond that and envision limitless opportunities for ourselves in a way that seems almost attainable.

“It’s my first time in music and I’m not sure how far I can go! But I hope my music can inspire young people to make a change in life and to have courage in creating a second identity for themselves.”

When asked directly about her thoughts regarding what might constitute reality in this day and age, RUBY of course is a staunch supporter of the fact that both virtual and actual realities are equally powerful spaces; yet at the same time equally unreal.

“Nothing in this world is real. Everything we see or experience could be programmed or created by someone and even emotions could be deceiving. But since I’m a very attached and sensitive person that I almost feel everything too deeply, it can be painful to be this way. As I’ve matured I’ve learned to create some and distance for myself from the others so I can protect my own emotional state and prevent taking everything too personally.”

By blurring the boundaries between virtual and actual in her work, RUBY takes part in a decades-long conversation regarding the binaries of virtual-actual and real-possible notably championed by French philosopher Giles Deleuze.

As countless academics, philosophers and creators have been preaching for years, our realities are looking to become increasingly digitalised, and it is up to us to become educated about this new world we live in, and make the most of its limitless possibilities.

RUBY 9100M is but one example of how our agency to shape our futures could contribute new points of views towards our creative processes and the notion of authenticity. While she is certainly not human, her creators and collaborators certainly are, and it’s endlessly intriguing to see how Avastar and Club Media’s vision continues to unfold as they launch themselves headfirst into a brave new world.