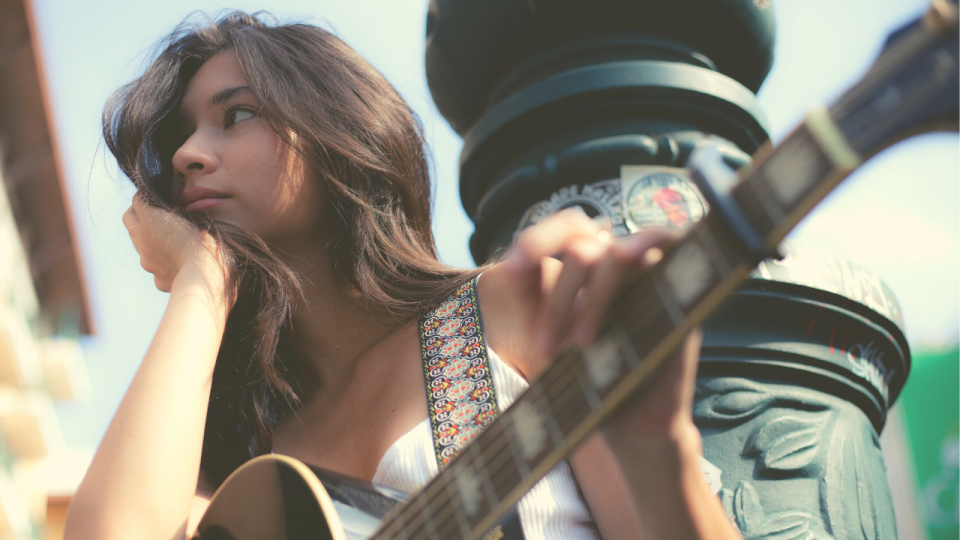 Interview with Valentina Ploy – A Much-Needed Ray of Sunshine

Armed with the sweetest smile you’ll ever see and a sunny disposition, Thai-Italian singer-songwriter and multi-linguist Valentina Ploy is the perfect companion for both days out and days in. A freewheeling creative who seems to be teeming with boundless energy at any given moment, Ploy’s drive to discover new things and desire to spread positivity to those around her -no doubt with guitar in hand- is inspiring especially in times like these.

We got together to chat with this modern-day Disney princess about how to make the most of a non-ideal situation, how to turn negativity into positivity, and how to treasure the important things in life.

While domestic bliss isn’t everyone’s cup of tea, we have no choice but to make it work as we stay indoors and hope that the end is in sight. For Ploy, whose socials are filled with pictures of the sun, sand and sea, we were interested to hear how she’s adjusted to these sudden changes.

“I LOVE spending time with others but of course for now my main view is home. The current COVID situation is not easy for anybody probably and its unpredictability could create anxiety… I’m still human and can feel low sometimes but also this time didn’t really change my general perspective of life. Just speaking for my situation personally I feel more grateful than ever, to know that in these hard moments I have a place to stay, I have the love of people around me, far and near, I have water and every tool to take care of myself and stay safe. And maybe I needed a break? The world is bizarre but I still love it anyway… Nature cannot really be controlled but this too shall pass! Just hope everybody could stay kind and safe.”

Despite spending most of her time indoors now, the peppy creative nevertheless says that her inspiration is far from drained as she digs deeper into the creative process during her time in isolation. From writing and singing to drawing and cooking, no outlet is out of bounds for this artist. She proffers her thoughts on how to beat the negativity bug from within.

“I guess a block comes when one does not feel inspired or feel anxious for something… I would say, try and use THAT thing, that fear, that negative thought, that anxiety and turn it into art! It works for me as well. Try to put down everything without thinking about it too much and in the end it will make sense ❤ Try to explore new things, new music, new books or anything that could keep you inspired and empowered!”

A thrill seeker who searches constantly for new experiences that fulfil and enlighten, Valentina’s multicultural background has taught her to traverse seamlessly across cultures and perspectives, and to always find the beauty in a more connected world. She shares with us a little more about her upbringing and how it has always been intimately connected with her love for languages.

“I was very lucky to be half Italian and Thai so I absorbed these two main languages from my parents. I was born and raised in Italy so Italian is my very first native language but my mum fought so hard to teach me Thai too … Grateful forever for that! About English, I’ve been traveling a lot since always … and I guess being in a multicultural reality all the time has positioned English as a natural middle language in my mind. Together with English I’ve been also studying in a languages high school so I got to deepen my Spanish and French as well. Then I graduated in a languages university in Italy so I practiced languages there too! Also I got a scholarship during my bachelor degree so I had the chance to go study and live in Spain for almost a year! 🙂 last but not least… I love languages and I’m very passionate about them!”

As a multilinguist who can speak five languages (Italian, Thai, English, Spanish and French), Ploy shares that languages have always played a big part of her life, even as part of her isolation routine. She told us a little about a normal day in self isolation for her:

“I wake up and have a nice breakfast, I write music and practice guitar to try to develop new ideas, I draw and I read, I cut old clothes and make new ones out of them, I go down the building and try to create a photo shoot with my mum, I am learning Swedish, I am teaching languages online and talking to my loved ones via video call! Also I’m doing lives on social media to stay connected with the people that support me! 🙂 busy days for me hahah but new things are my fuel :)”

Her free spirit and love for languages combine nowhere better than in her musical creations. Having seen her write and perform effortlessly in various languages which she speaks, it is clear that for Valentina, learning languages is not just a hobby or a chore. Instead, it’s part of her personal philosophy to immerse herself even more deeply in what the world has to offer.

“When I learn a language I also absorb its culture and surrounding and that makes me able to kinda think in that language when I want! It comes quite naturally.”

Yet despite the seamless manner in which Ploy seems to be able to compose and perform in different languages, her own works are mainly in English which she perceives as a universal language that she finds easiest to write in. Whilst her repertoire of calming and radiantly positive folk pop is still small now, the bubbly singer exclaims excitedly that there is surely more in the pipeline.

“oh lalaaaa yes yes yes!! Very very soon! Probably new music will come out in the end of May… It has been postponed a bit but it will be worth the wait! I’ll have a new single out opening my first debut EP which will follow some weeks later! So so excited for this!”

Someone who wears her heart on her sleeve and absolutely brims with positivity, Valentina’s personal outlook is embedded deeply in her music. From its meditative core to its infectious exterior, Ploy pours herself into her works with both care and abandon, creating a sense of authenticity that is precious as it is rare. Bringing with her a strong sense of self and a deep empathy for the world around her, she’s just the ray of sunshine that most of us need right now.

Inspired by the message behind her latest single ‘Let Go’ (pretty self-explanatory), we had Valentina create us a ‘Let Go’-inspired playlist to banish those stay-at-home blues. Enjoy!

Valentina has released her latest single ‘Love You Better‘, followed by an album in the coming months. Stay in the loop by following her on Instagram or Facebook!