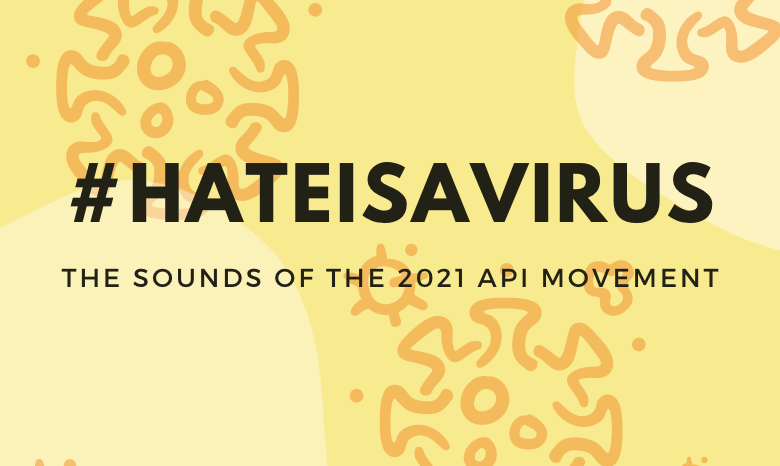 #HATEISAVIRUS – The Sounds of The 2021 API Movement

As Asian American Pacific Islander (AAPI) heritage month comes to a close, we wanted to reflect on how the conversation surrounding Asian diaspora populations seems a little different this year. While I am not Asian American, I’ve been a keen researcher of Asian representation in the media, a topic which is most widely discussed in the states due to their clout in the media industry. Furthermore, being a member of the Asian diaspora community myself, I associate deeply with this movement too, because well heck, there doesn’t seem to be any other program I can get with.

Ever since the ill-fated Atlanta Shootings on March 16, 2021 which killed six women of Asian descent, an uproar has been heard from the Asian diaspora community in the states and around the world in the form of slogans such as #Hateisavirus or campaigns such as #StopAsianHate that have brought to light the uptick in Asian hate crimes and discrimination over the past year. While researchers and industry professionals have long warned about the dangers of the model minority myths and advocated for increased visibility and opportunities for Asian Americans and Pacific Islanders, it seems that the situation has reached a tipping point that has forced the wider population and public conscious to take responsibility for the issues that are happening today, while revisiting the atrocities that have plagued the AAPI and minority communities for generations.

From old laws that legalise mistreatment such as the 1854 California Supreme Act case People vs Hall which drew the line that Chinese people along with other minority groups could not testify against white people, to the infamous 1882 Chinese Exclusion Act which prohibited immigration of Chinese labourers, the struggle for the AAPI community is deep rooted in the States. These laws and hate crimes can be found the world over, in places like Australia or Europe who certainly have their own history of discrimination. But why I want to touch on the American Asian American movement in particular is because of the outpouring of conversation, movements, and of course music that has come out of it.

In line with AAPI Heritage month, I’ve seen everyone from the most established artists and activists to grassroots independent artists talk about their experiences as a person of colour in a predominantly white country. Be it a response to the shootings, the recent trend of discriminations or a homage to the rich history of the Asian American community, music is an important way to keep the conversation on the issue going, in order to lay the foundations for real change.

So here are four artists who have released music in response to AAPI Heritage Month; telling their stories, starting conversations and contributing to change. And check out our AAPI #Hateisavirus playlist which brings together Asian diaspora artists from all over the world championing for equality and stamping out racism through their voices and visibility.

Created in partnership with the American Asian foundation, Asian American rapper MC Jin has teamed up with Grammy award-winning musician and activist Wyclef Jean to release “Stop The Hatred”, a song whose message rings through loud and clear. Inspired by Jin’s son who yelled these three simple words at a #StopAsianHate rally , the song pairs Jean and Jin’s penchant for politically conscious lyrics with simple, resonant beats make for a momentous collaboration like no other. With Jin widely known as the first Asian American rapper to ‘make it’ in the Western music industry, and Jean bringing his experiences and passion for multiculturalism and supporting the black community, the song makes a bold statement about how the Black and Asian communities stand together in this fight for equality.

Asian-American singer-songwriter and activist Hollis has long been an advocate for Asian American rights in her music and other efforts. But especially for AAPI Heritage Month, she released a single titled ‘Grace Lee’, a simple but beautifully done acoustic track that tells the story of an Asian American treasure Grace Lee; one of many that are often hidden from clear view when discussing Asian American history. Telling the story of Grace Lee Boggs, a Chinese-American philosopher and movement organiser who tirelessly dedicated her life to advocating for civil rights, labor rights, feminism, Black Power, Asian Americans and the environment, the song is inspired by a famous speech by Grace which calls on us to “reimagine everything“. On this emotive track, Hollis’ sweet vocals paint a vibrant and moving picture of one of America’s greatest visionaries, whilst urging us to believe in the inevitableness of change as Grace always did.

Bohan Phoenix – But I Still Love You

Chinese-American rapper Bohan Phoenix has long been an advocate for change based on empathy and love. Often spitting rhymes on his background and forging new connections between the East and West, Phoenix was also a vocal supporter of the #BlackLivesMatter, paying homage to the rich history of Black music that brought him to where he is today. His latest song “Because I Love You” is a representation of Phoenix’s philosophy towards how we interact as humans in the context of increased racial tensions, sampling fresh Jazzy sounds and combining them with hard-hitting beats to convey a message of love above all. Rapping in English and Chinese about everything from Asian violence to inner healing, the music video features a melting pot of young people from all different cultures, putting out an uplifting message that includes all listeners.

Doing a deep dive into the roots of Asian American culture, Asian American rappers Alan Z and Jason Chu paired up to release collaborative album “Face Value” that is inspired by momentous occasions in Asian American history. “Model Minority” is one of the singles off the album that focus on one of the most insidious aspects of Asian representation in America – the model minority stereotype. Rapping over samples of traditional Chinese instruments and soulful beats, the song which also features Neela and Dante Basco makes reference to the complex issues that spillover from years of oppression, from a lack of opportunities to a lack of visibility, and of course to specific instances of police violence such as the Christian Hall shooting. Creating a body of work that reminds and refreshes listeners’ minds on over 170 years of oppression and solidarity that the community has gone through, Alan and Jason’s album is a clear call to action that raises the visibility of where Asian Americans come from.

Listen to our #HATEISAVIRUS playlist

To us, the API movement extends to all Asian diaspora members around the world. Check out our playlist of brilliantly inspiring Asian diaspora artists and their calls and critiques for change.

Have a song you’d like to see on here? It’s a collaborative playlist, add away!