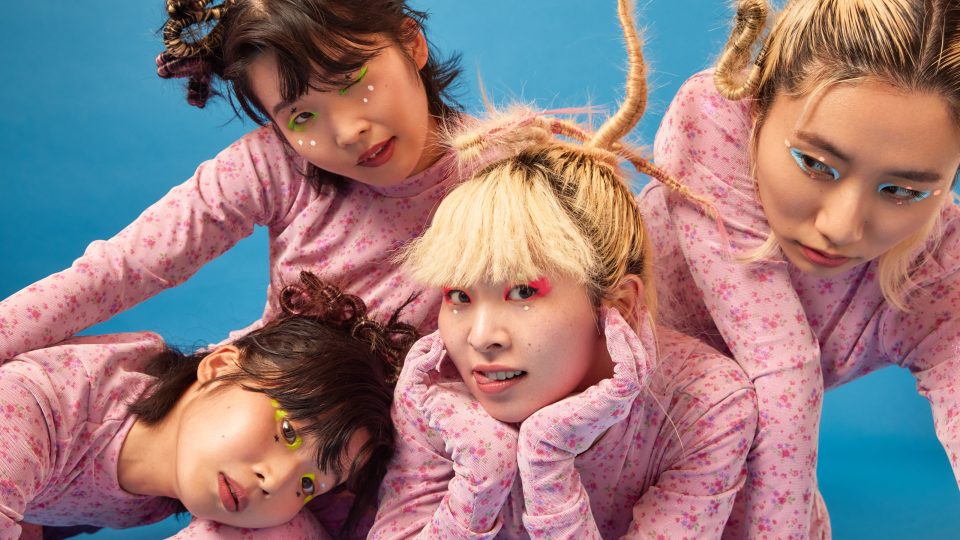 Peppering their replies with unsolicited hearts and pig emojis, Japanese girl group CHAI are a vibe that can be felt from a mile away. Adopting ‘redefining cuteness’ as their motto, the four-piece band are doing just that with their slightly off-tilt psychedelic brand of alternative rock, mixing saccharine vocals with vibrant synths, subversive guitars and assertive drums to create a new strain of kawaii that would melt even the most hardcore of hearts.

Sharing little anecdotes that share the band’s deepest aspirations as they’ve travelled across the globe; milestones achieved and songs that keep their spirits up, it’s hard not to fall in love with these girls’ almost aggressive level of positivity that you can’t help but admire.

Choosing a selection that range from Mitski to Su Lee and HONNE, CHAI take you on a journey of unabashed colour and songs that have supported their femininity.

🐷 Love Me More – Mitski
Being able to tour in the US after 2 years was all due to Mitski and her crew♡
An Artist that we LOVE, who we not only have so much appreciation for but allowed us to stand at a new starting line!

🐷 Naked Eye – Luscious Jackson
A song that we’d often listen to and get motivation from on our car rides back from the studio in Tokyo!  I can still remember the conversations we’d have then about how great it is to be in an all-female band and the vibe it created♡

🐷 New Mistake – Jelly fish
The first Western song we ever experienced!
The song that decided the path in which CHAI would take!

🐷 Best of My Love – The Emotions
An frequent visitor of our past CHAI shows…you can hear it in the sound effects of our song “END”♡
We love the “present” CHAI and this song allows us to taste all of our most happiest moments!

🐷 Busy Earnin’– Jungle
The double attack of both “motivational”and a “release”!
“Wow?!  There’s so much more to the world!”

🐷 I’ll Just Dance – Su Lee
A friend♡who displayed an AMAZING opening performance during our CHAI “North American Tour” 2022.
“There’s no way of loving, from you”♡

🐷 SUNRISE – MICHELLE
A song that turns any day into sunshine…the every morning go-to song♡
It’s got this mysterious power and an unexplainable comfort, that gives you the inkling that today’s going to be a good day♡

🐷 Good Together– HONNE
Before the world became surrounded by Covid, this was the song we came across during our time touring the US.
It was show day and we were worried about continuing to do this in America, but in hearing this song, it’s at that moment that we not only were convinced but confident that they would understand our music…and that a team was born from our friendship.

It resonated so much that the tears wouldn’t stop.  Feeling happy, feeling lonely, the tears continued as I chuckled, listening to it on the airplane ride home.

🐷 Everyday People – Sly & The Family Stone
Music that reminds us that we, humans, need it, whether the past or present♡
Music is a form of magic and a revolution, that holds the power to affect change!
I love it! Really love it!

🐷 思い出がいっぱい/Omoide ga Ippai – CoCo
Came across this Artist from a Japanese anime I love called “Ranma”♡
“Mornings that begin with a Smile”
“I treasure, even the most casual moments”
“It’s hung up on the album of my heart!”
All of it is kawaii! I want to look forward to every memory that life brings♡

CHAI will be bursting into Sydney on 10 June as part of VIVID with their exuberant and joyful live set. Their Sydney set will be supported by The Lazy Eyes and Romero. CHAI will also be at the Forum in Melbourne as part of RISING festival, supported by Buffalo Daughter on the 11th of June. Check them out if you’re in town! Follow CHAI on Spotify, Instagram or Twitter for cuteness overload.