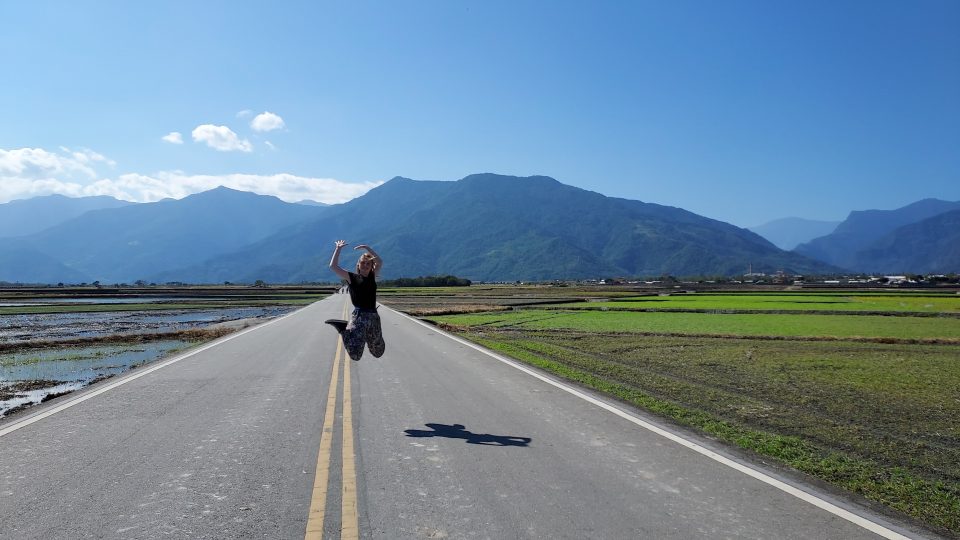 Combining sweetness with extraordinary eloquence, Sinead (not to be mistaken for her namesake) is a force to be reckoned with. A Cambridge girl with a love for conversations between cultures, her passion has taken her all over the world and thankfully allowed us to cross paths.

Currently based in Taiwan, this has not stopped her from discovering different sounds all across Asia, from the Philippines to Japan. Her freewheeling mindset and openness to new experiences is admirable, and has been inspirational especially as we embark on our journey to expand Asian Pop Weekly towards supporting artists all across Asia and the diaspora in recent years.

Our conversations morphing into an endless barrage of recommendations of different artists we’ve discovered (with the occasional Guo Ding fangirling episode), Sinead has proved herself to be both a translator and writer with a lot of heart. From penning poetic translations to some memorable features with the likes of Zheng Xing and FIRE EX, nothing is too challenging for this intelligent, music-loving soul.

What year did you join APW? October 2019! I had admittedly been lurking around on APW’s translation page for a while before that though. Once I found out that Jocelle was also a Guo Ding 郭頂 fan there was really no turning back.

What is it that APW does which resonates with you? For me, I like that APW is all about facilitating communication – between the musician and the listener, between Asia and beyond – between music fans themselves. Beyond that, I also really appreciate the breadth and depth which APW offers in terms of content, from introducing new music in News Nuggets to taking a deep dive into the lyrical choices of artists in Liner Notes. I think it’s the passion of our writers and editor which really makes this possible.

Any APW related highlights or milestones? It has to be interviewing some incredible musicians! Especially Fool and Idiot 傻子與白癡 and FIRE EX.滅火器.

Favourite genre/styles of music? I’ll listen to anything, but have to admit a lot of it comes under indie pop or ‘literally anything from/sounds like it’s from the 80s’.

Favourite Asian artist(s) My favourite artist seems to change with the seasons, but if I’m forced to pick right now, I would go for the retro/epic vibes of Eggplant Egg 茄子蛋 .

What are you passionate about? Anyone who knows me knows that I love learning languages, and it was really this that got me into Mandopop in the first place. But I see languages as windows into different cultures, and cultures as repositories of layers and layers of narratives we tell ourselves and each other. Ultimately, I’m fascinated by how other people use different media, whether that be language, music or something else, to share their own story.

Track 01: Amazing Show 美秀集團－The Ultimate Virus 殭屍王
It has definitely been a kind of Amazing Show kind of year. Putting the ‘avant’ back into ‘avant-garde’, in the same year the band has put out this spiritual(?) electro-punk track, a soft-rock ballad on the subject of dreams and most inexplicably, the official Taiwan-beer sponsored anthem for the Tokyo Olympics. Relentlessly creative (the main singer has famously invented his own instrument which can only be described as a piano crossed with a harmonica crossed with a kazoo) and never predictable, I always look forward to their next release.

Track 02: Makav 真愛 – embiyax su hug 你好嗎
I am convinced that ABAO阿爆 can do no wrong. Not only did she win best album at the GMA’s last year, she also found the time to produce and release this underrated album featuring young Taiwanese artists who sing in Aboriginal languages. It’s not hard to hear ABAO’s unique touch in the looping melodies and complex percussion, but each track is of course an expression of the artist, with this Taroko/Bunan/Chinese language track by Makav being my stand-out favourite. The electro-beats and Makav’s impressive vocal runs are a brilliant tribute to the denim-heavy RnB of the early 2000s but the mellow piano breaks bring it back to the modern day. Endlessly replayable.

Track 03: Ben&Ben – Leaves
For me, Filipino band Ben&Ben’s music is the definition of 療愈(soothing). They seem to have a song for every emotion and season, and almost every one is guaranteed to immediately improve my mood. Leaves was released back in 2017 and ostensibly tells the story of a couple overcoming a rough patch in their relationship. However, featuring Ben&Ben’s warming vocals over a soft piano melody, listening to this gently uplifting ballad is like a hug in song form, especially as the world changes around us. This song always reassures me that “from waves overgrown come the calmest of seas / And all will be alright in time”.

Track 04: Tan Weiwei 谭维维 – Jane Doe (alias) 小娟（化名）
“Redact my name, forget my name / The same tragedy, played and replayed“. We’ve all seen the reports of a spike in domestic violence cases during the pandemic, but Tan’s track really put into words for me the sense of anger, injustice but also helplessness these reports made me (us) feel. In her lyrics she deconstructs the misogyny not only of media reactions to domestic violence cases, but also points out how deep anti-women sentiment goes, at one point listing out all the derogatory characters which contain the female radical 女 in Chinese. Both an epic goth-pop ballad and a rallying cry for societal change, it felt like an important song for me this year; both inspiring and devastating in equal measures.

Track 05: Alexander 23 – Track 9
My English music taste recently could pretty much be described as “heartbroken indie boy” (see NIve, Conan Gray, Ruel etc.). And so Alexander 23, an upcoming millennial singer from the US, has become a permanent feature of my playlist. Although many of his tracks cover well-worn themes of relationship issues and toxic exes, something about his understated audio landscapes and straightforward lyrics makes each song seem like an intimate conversation between him and the listener, often drawing out the absurd or painful truths about relationships. Track 9 is no different, doubling as a goodbye letter to a former lover, which he can’t bring himself to write down because “once the pen’s to paper / then it’s really really over”. Here’s hoping his upcoming tour manages to swing by Taipei so I get to hear this talented artist live.

Track 06: Brave Girls 브레이브걸스 – Rollin‘ 롤린
And now for something completely different. Originally released to little success four years ago, in the spring of 2021 a viral video of South Korean soldiers going crazy over this track catapulted it back up to the top of the charts and in a single swoop revived the flagging careers of the Brave Girls. It has quickly become my guilty-pleasure song of the summer, with its sunny beats and an chorus impossible not to sing (shout) along with. Although its still pretty much impossible to travel anywhere, this song provides a much needed ray of sunshine and shot of serotonin.

Track 07: Hormone Boys 荷爾蒙少年 – 4:00A.M.
After getting to see them live twice in the past year, I couldn’t not include Hormone Boys in this list. A young indie-rock band from Taipei who share a producer with Amazing Show, I see their music as both inheriting from the rock tradition, while also being imbued with the Gen-Z trait of breaking taboos with their searingly honest lyrics and intentionally unpolished performances. This 8-minute track puts to music the 4AM insecurities of a guy trying to work out if his crush really likes him back, “I get it, you’ve got everything going for you/You’ll never notice me”. Progressing in movements from a melancholy guitar riff to a cymbal-led, synth-infused climax as the story unfolds, the highlight comes around the 6-minute mark as a recording plays of the girl letting the boy down, which the audience always joyfully shouts along to during the live performances. Guaranteed to put a smile on my face, this song is always a happy reminder of the days of pre-COVID concerts.

Track 08: RADWIMPS – Sparkle スパークル
Although I wasn’t a huge fan of the film it was written for (Your Name was a bit of a La-La Land disappointment for me), at least it brought this incredible soundtrack into my life. Written entirely by the J-Rock band RADWIMPS, it has the familiar racing-guitar anime sound, but blends in cinematic and orchestral elements, elevating it to create a uniquely beautiful musical landscape. Sparkle is my favourite song of theirs, mainly thanks to main singer Yojiro Noda 野田洋次郎 incredible vocals which animate the gently swirling piano theme as it lifts to a soaring climax. I’d especially recommend listening to the beautiful orchestral version the band sang with the backing of the Tokyo Philharmonic Orchestra, which really brings the track to life.

Track 09: Eggplant Egg 茄子蛋 – Oh Love, You Are Much Greater Than I Imagined 愛情你比我想的閣較偉大
It’s so hard to pick one song that is my favourite of Eggplant Egg’s, but I’ve gone from their latest release, which similarly to the above was the best thing to come out of a lackluster film release (Man in Love 當男人戀愛時, the less said about this the better). A retro-electro extravaganza driven by a powerful electric guitar riff and racing drum beats, it’s the perfect first-song-of-the-night for KTV. Now I just need to learn Taiwanese…

Track 10: Accusefive 告五人 – Beyond The Sea 與海無關
The more I listen to this band, the more they grow on me. After hearing many of their big hits (especially the endlessly covered I’ll Give You the Stars 披星戴月的想你) out and about in Taiwan, it was only when I got around to listening to their latest album that I realised that there is so much more to their music. Aside from their popular stadium-anthem big-band tracks, the trio aren’t afraid to experiment with other genres, from futuristic synth-pop to delicate acoustic ballads like this one. Making the most of the beautiful harmonies of the two lead singers Yun-Ann 雲安 and Quan-Qing 犬青, this gentle lullaby really does ‘spark joy’.

In this 4-part Choice Picks series, we invite team members Allison, Matt, Sinead and Jocelle to share their thoughts about being part of APW, and of course what music gets them going in the morning. Check out the series as we release throughout the month of August here.