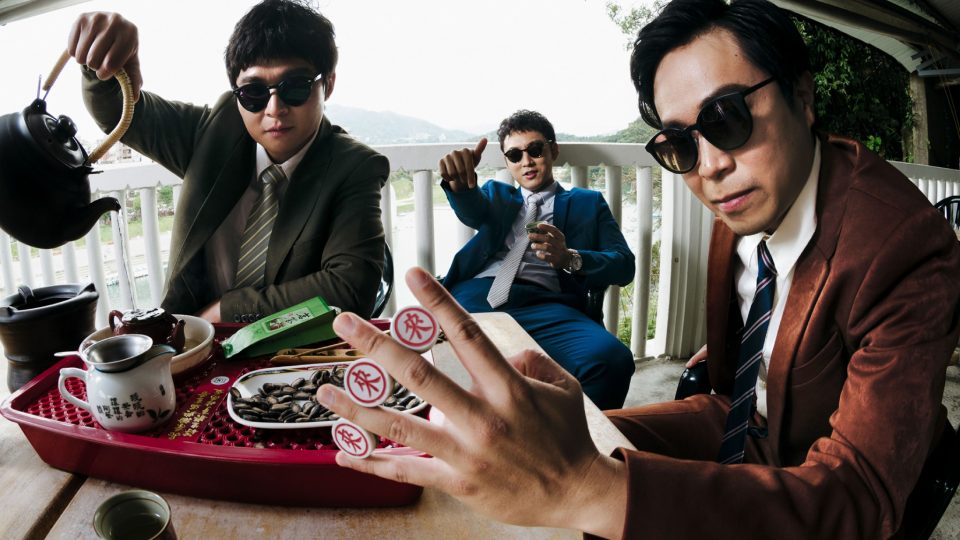 A decade ago, Sorry Youth 拍謝少年 were a trio of wide-eyed university students falling in love with the world of rock and underground music. Fast-forward to the present and the band, made up of guitarist Weni 維尼, bassist Giang Giang 薑薑, and drummer Chung-Han 宗翰, have established themselves not only within their beloved Taiwan indie scene, but also beyond, taking their homegrown brand of back-to-basics Taiwanese Hokkien rock infused with the rich tapestry of Taiwanese culture with them.

2022 has already been a busy year for them being nominated in three categories for this year’s Freshmusic Awards as well as being selected to perform at the SXSW Taiwan Beats Showcase alongside acts such as Elephant Gym大象體操 and Olivia Tsao 曹雅雯. For this special online performance, the band played an incredible one-off stage at the historic Wufeng Lin Family Mansion in Taichung, famed as one of the ‘Four Great Residences of Taiwan’.

We caught up with them as they prepare to tour their latest album to talk about their growth from ‘Sorry Youth’ to ‘Sorry No Youth歹勢中年’, charting their struggles starting out as part time musicians to their recent successes. Along the way we chatted about rock music, their favourite Taiwanese phrase and how friendship has been the key to their journey.

Q: Can you describe the early days of the band? What was it that made you want to get together?

A: Our motivation was pretty simple – when we started out we were just three young and dumb university students. After visiting Spring Scream [Taiwanese music festival held in Kenting] and the legendary underground music venues we fell in love with rock music. So we decided to have a go as well! I guess that was back in 2004, 2005, when there weren’t smartphones, social media sites or high quality videos and Youtube was only just becoming a thing. So everything we learned about rock music we saw and experienced right in front of us – I think that spirit of live rock is still really important for our music and performances.

Q: You describe yourself as as ‘Taiwanese rock band’. Can you describe what rock means to you personally or as a band?

A: As a Taiwanese band, we use rock to talk about life. A really good example of this is how it’s become normal for Taiwanese young people to go to music festivals in their free time. So there are all these places that rock music is being performed, and all these groups of young people who are brought together at these venues to laugh and cry and let out all their emotions. That’s a huge inspiration for us, coming to these festivals as an artist or participant and seeing how rock music is so important to a whole generation of young people. Of course our determination to produce music in Taiwanese Hokkien, our mother tongue, is another thing that keeps us motivated.

Q: You have now released 3 albums (2012’s Sea Food 海口味, 2017’s Brothers Shouldn’t Live Without Dreams 兄弟沒夢不應該 and 2021’s Bad Times, Good Times 歹勢好勢), how would you describe the progression or change in your sound/influences over that time?

A: I think that as a band our musical sound has matured as we have too. For example, our first album Sea Food 海口味 had some pretty crazy songs, which listening back really represents that kind of excess and unashamed boldness of youth. Then our second album, Brothers Shouldn’t Live Without Dreams 兄弟沒夢不應該 , we made when we all had day jobs and were trying to do music on the side, so you can really hear that frustration and unhappiness. Our most recent album Bad Times, Good Times歹勢好勢 has that feeling that after so many years of hard work everything finally came together. For an indie band that writes all their own stuff, it’s those shifts in perspective that can inspire you to create new music.

We are obviously big consumers of music ourselves and these past few years we have have fallen in love with more and more new artists and styles. But recently we have also tried to consciously listen to what the bands we love were putting out when they were in their thirties, we want to see – across different cultures and generations – what rock bands are thinking during middle age.

Q: Your last album had a lot of Taiwanese historical and cultural references, from night markets (‘Night Market 踅夜市‘) to White Terror inspired tracks (‘Justice in Time時代看顧正義的人‘). Why is this kind of creating important for you?

A: Because we are a group of people who love music, and also who have grown up surrounded by the historical and cultural changes on the island. All these memories are stored in our brains, and just hearing a couple of notes can take you right back to those moments. By writing these memories into songs, we can use music to share our experiences. That’s why we wrote about our beloved night markets, as well as being inspired by conversations with the forefathers of democracy in Taiwan. We tried to we can encapsulate something of their bravery of spirit in our music, to hope for justice in time.

Q: It’s already been ten years since you released your first album. What would you say is the biggest thing you have learned growing up together as a band?

A: People come before music. Making music as a band relies on everyone doing their part. Since the very beginning we had an understanding that the most important thing to us was to the fun we had in making music. So we really avoided anything which would get in the way of this, and luckily it’s still true today. Also, apart from being band members, we are also friends. So we are able to understand each other’s perspectives and viewpoints, rather than just seeing each other as musical collaborators.

Q: You famously only sing in Taiwanese Hokkien. Can you each teach us your favourite word or phrase?

A: We really like the idiom ‘人情留一線，日後好相Jîn-tsîng lâu tsi̍t suànn, ji̍t-āu hó sio-khuànn’ [translates as something like ‘be good to others and they will be good to you’, where ‘Jîn-tsîng lâu tsi̍t suànn’ literally means ‘maintain your bonds with others’]. I always think this phrase is really beautiful, because we are connected to other people by countless bonds, I guess that is where the phrase ‘social network’ comes from. There are always ups and downs in life, and sometimes you really need to rely on a helping hand to pull you up. So it’s really important to be open-minded and open-hearted in relationships.

Q: You played at the Wufeng Lin Family Mansion 霧峰林家宅園 for the Taiwan Beats Showcase. What was it like playing at SXSW (online) and in such an historic venue?

A: It’s such a wonderful and amazing experience for us, because we never had the chance to perform in the historical site. To perform in Wufeng Lin Family Mansion is just like you step into the scene of “Crouching Tiger, Hidden Dragon,” suddenly you seem to peep into the history of Taiwan, and you connect the tradition of the past seamlessly with the modern music. Actually the stage itself was built for the theatrical performance, so it’s very interesting to combine it with rock’n roll music.

Also, the location is perfect to correspond with our songs as ‘Pilgrimage 出巡’ and ‘Love Our Differences 你愛咱的無仝款’ for paying tribute to the traditional ritual and diversity of Taiwan’s culture, and the historical site as Wufeng Lin Family Mansion surely is not open and well-protected most of the time, so it’s really an once-in-a-lifetime experience for us.

Q: What is it as a band that keeps you going forwards? What is the dream or the goal you are moving towards?

A: Music is just like the daily part of our life. Either when we wake up in the morning or fall asleep at night, most of the time we think about our music and all the other things related. We spent most of our time trying to create, expand or polish our musical languages. For us, music is a borderless domain where you could understand and communicate with the people all over the world, and the songs could even carry the feelings and emotions of human beings, which is such a beautiful thing for us to leave some traces in the world.

But it’s not so easy to survive and to be recognized if you’re dedicated to writing your own songs in Taiwan, so it actually took us a long way to finally become full-time musicians.

Now we’re really grateful for keeping making music and live performances on and on. It’s good enough for us to walk firmly on the music’s path, and we won’t long for any overnight success but focus on accomplishing the present mission step by step. Just as our concert named “Come as You are 來來來” on July 9th and 10th at Zepp Taipei this year, fortunately these two concerts were sold out immediately and we’re so excited to bring our best production for the audience.

Q: Recently the pandemic has got more serious – will that influence you going forwards? How do you deal with it as a band?

A: Last year we released our third album Bad Times, Good Times歹勢好勢 at the time of facing the lockdown of pandemic, forcing us to cancel the planned tour.

But we soon decide to turn the uncontrollable situation into the something we could manage by making online live sessions with festivals such as New York’s “Mondo festival“, Korea’s “Zandari Festa“, and Japan’s “Cinra exPoP”, “Call Out music” with “the band apart” and most importantly, our online theatrical concert called “Deja Vu.” We also made different MVs and some online promotions with the media, and we gladly received a lot of feedbacks that we felt warm and connected at such a difficult time. So we dare to say we still tried our best to bring our music to lives even in the difficult situation.

For common people like us, it’s impossible to predict how the pandemic will affect us in the following days. All we could do is to live in the present and search for any possible solutions. As Leonard Cohan once said, “there is a crack in everything, that’s how the light gets in.” People following the light might have the chance to see the scenery on the other side.

Q: Could you each pick one song (each) that you think represents Sorry Youth and explain why?

Weni: ‘Sorry No Youth歹勢中年’. The lyrics are really down-to-earth and the style is really free, but it’s still a track full of emotions.
Giang: ‘Brothers Shouldn’t Live Without Dreams 兄弟沒夢不應該’. I think in some ways this song really defined our style. I really love how the musical dynamics and phrasing came out.
Chung-Han: ‘Undercurrent 暗流’. It has a complicated structure but a simple idea to sing the ups and downs of life.

As mentioned above, you can check out Sorry Youth on the SXSW Taiwan Beats Showcase here or at their concert at Zepp Taipei on July 9th and 10th (more info here).