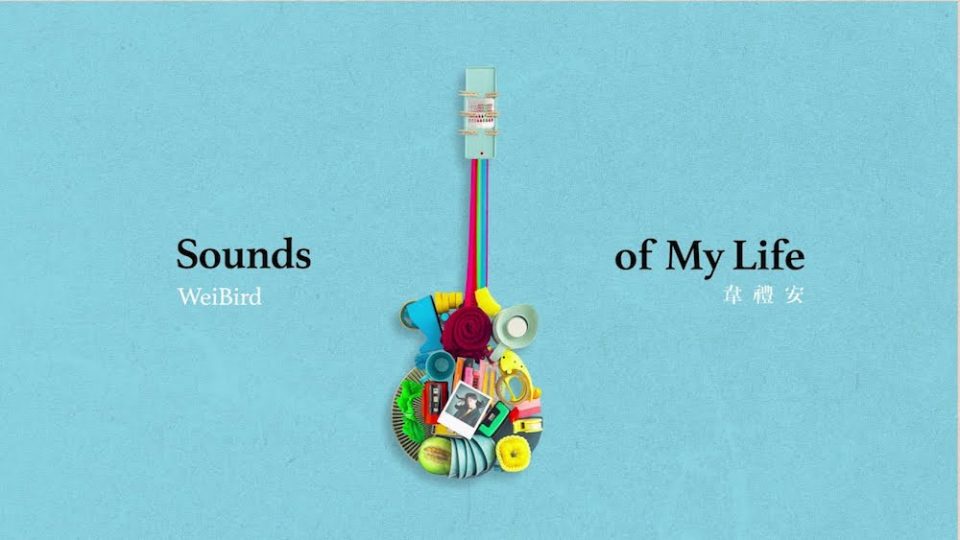 For me, singer-songwriter WeiBird (a.k.a William Wei) has always had something special. Despite the industry churning out talented boy-next-door singer-songwriters by the dozen, from the moment I heard his debut self-titled album back in 2010 I was sold. It’s not just his uniquely versatile vocals, nor his witty yet heartfelt way with words. No, his music has an almost magical way of connecting with listeners, and not only drawing your attention to him, but also making you feel like in that space of a song or an album, his focus is just on you.

Although we will not go into detail on the established artist’s troubles with his previous record company, we will leave it at that to say that Wei’s debut album; with its heartfelt charm made an impression on me that I still remember oh so clearly even a decade on. Just in time, one might say, for his momentous new album ‘Sounds of my Life’, which marks his first fully independent release and the start of a new chapter for the artist. And upon first listen to the new album, was I not disappointed. ‘Sounds of My Life’ is everything I expected and more; a tidy yet extravagant compilation of Wei’s experiences, values and principles into a seamless and greatly moving listening experience.

Interweaving literal sounds from Wei’s life throughout the album, the album starts off on the title track’ with a lush combination of fresh, bright guitar mixed with the crackle of radio static and ambient sounds, before WeiBird starts singing; his first verses partly obstructed by the static. Yet the inviting tone of his voice, welcoming and warm pushes us to keep listening as the chorus swells and transitions from its acoustic beginnings to an uplifting R&B/Soul outpouring; all whilst hid behind the curtain of static. It is almost as if the talented producer could not wait to share the sounds of his life with eager listeners; but did so shyly, hiding behind walls of sound to intrigue listeners but to also protect himself; as if too early in the musical journey to reveal all. In the second half of the song, Wei moves out from behind the static to converse more intimately with his listener, singing the verse once more as the song slowly moves towards its end before lulling to a close.

The second track on the album ‘See You On Monday‘ follows the first closely, picking the tempo up again without skipping a beat. Setting the scene with the sounds of a teacher saying goodbye to his students on a Friday, the song is a funky, irresistible outburst of rhythm and vibrance that can’t help but put you in a good mood. Reprising his cheeky, playful side, Wei sings somewhat tongue-in-cheek lyrics about waiting through the weekend to see someone again “Time to say goodbye for the weekend/You’ll be on my mind/To push me through the grind of the weekend” which pairs brilliantly with the lively big band atmosphere with clever modern tweaks. WeiBird has always been great at creating unadulteratedly happy music, and this may be out of his best efforts yet.

Continuing on the journey of incorporating sounds from his life into his music, WeiBird gets creative; using the sounds of a morning bathroom routine as percussion on the sleepy yet groovy ‘Toothbrush 房客‘, including a variety of cat sounds into the laidback, fluffy, reverb-y ‘Cat Republic 貓咪共和國‘ (and also just WeiBird making cat noises), while other tracks incorporate soundbites in the intro and outro of the song. ‘Don’t Tell 不用吿訴我‘ sounds like a sombre conversation about lost love, whilst the quirky ‘Best Meal In The World一口一口’ is full of the warmth of a family dinner and the love that exists behind a simple ‘have you eaten?’.

Musically speaking, the album is tied together by a dynamic mix of R&B, funk, folk, rock and pop and characterised by extensive use of distinct vocal backings and layerings throughout. As the story progresses, we do see a gradual shift from use of electronic elements and more ostentatious colouring in the first half towards a more mellow, live-band based sound, the main transition point being ‘A World Without You沒有你的世界‘ a song that seems to record Wei’s feelings towards the loss of his grandmother. Although still incorporating electronic beats and heavy layering of vocal backings, the melancholy of the melody in itself gives the song a strangely isolating feel despite all the noise surrounding it. A unique and unconventional take on heartache and grief.

At this point we see Weibird return to his folk-rock roots on tracks such as ‘At Thirty 而立‘ and ‘Remember to Come Back 記得回來‘. Accompanied by his trusty guitar, he writes sobering lyrics against those trademark searching melodies that cut you to the core, doling out a couple of life lessons along the way. On ‘At Thirty 而立‘ , he writes honestly of his existential fears after turning thirty: “I still haven’t figured things out/When did it become my turn/To face it alone/This world’s coldness and my own demons”, while the emotional ‘Remember to Come Back 記得回來‘ is an conflicted ode to a loved one to remember to come home after making their mark on the world.

At selected intervals throughout the album, Wei also spaces out strains of his song ‘I Wrote A Song For You‘ as it enters different stages of the process; first only reprised by the youth choir; then a demo by WeiBird; and nearing the end of the album a full rehearsal featuring Wei singing along with fans. An immensely likeable tune that catches on your heartstrings immediately, it leaves you reaching and wanting, always for more until the listener receives sweet release when they reach the song, finally at the end of the album.

A closer for the album, the song fills with the sounds of wind whistling through the trees and life all around and just WeiBird on his guitar singing in ever so warm tones that wrap ones’ heart in a tight embrace. Sweet and simple, the lyrics are gently moving as they appear to directly address the listener: “I wrote a song for you/You wrote a song for me/Because it’s you and me/That’s why life is meaningful“. Throughout the song Wei’s voice is resolute and continues to be increasingly so as percussion and finally the choir join in; a cacophony of sounds from all aspects of life coming together to sing a song just for you.

On this album, Wei has managed to marry his two greatest strengths – his ability to re-tell the ordinary in extraordinary ways, and his capacity to express them in the most heartfelt, relatable way possible. Be it through his vocals, melodies, lyrics, arrangements or the entire concept of the album, ‘Sounds of My Life‘ has achieved exactly what it set out to do; simultaneously giving us more of the WeiBird that we know and love, whilst updating listeners on the artist’s renewed musical sense of self.

Jam packed so full of layers and tidbits that a keen listener could come back for days and weeks on end in search of something new, Wei has managed the near impossible; to create a technically wonderful work that does not isolate the average listener; but instead uses these techniques to express himself all the more clearer. I have felt every bit of love, fear, sadness, and quirky playfulness that the talented artist and producer has hand-squeezed into this album; and I am grateful to have been witness to it and honoured that he would share his experiences so honestly and so graciously with us. This album is WeiBird’s, truly, and it could never belong to anyone else.