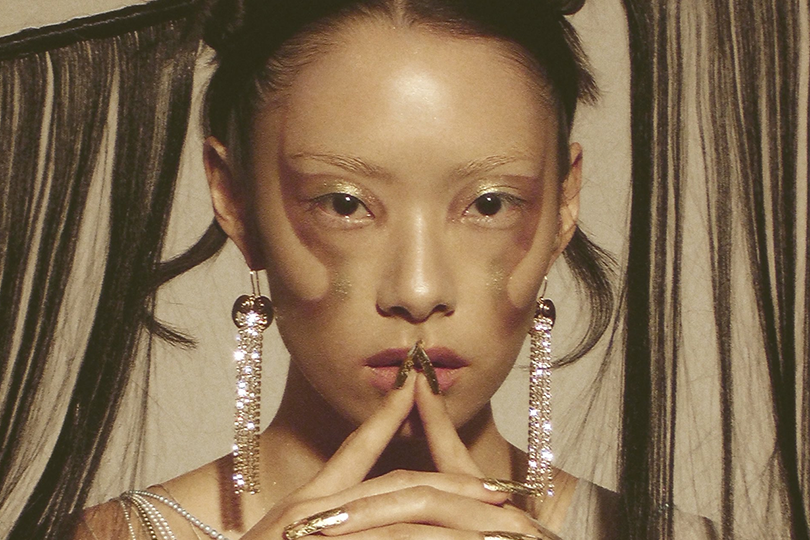 Japanese-British singer-songwriter and cultural icon Rina Sawayama is a pop star well and truly on the rise. After breaking through the clutter with independently released EP ‘RINA’ and her unique J-pop/2000s pop influenced sound, the colourful, opinionated artist returns with long-awaited debut album ‘SAWAYAMA’ to the glee of pixels (Rina’s fans) everywhere.

With this full-length album, Sawayama’s identity is fleshed out further; drawing again on themes of identity and societal issues that the artist is known for being outspoken about. Yet at the same time she introduces new musical influences; drawing heavily on indie rock and nu-metal elements whilst continuing to incorporate her signature 2000s pop/J-pop sound.

While she has never been an artist partial to singing about romantic love and relationships, ‘SAWAYAMA’ encloses a heavy-handed jumble of pop gems that instead touch heavily on lesser discussed topics of family, mental illness and self-love through the lens of race and gender. Rina is different, and she knows it. And therefore by association, so is this ground-breaking album which poses startling representations of the ‘other’ too vibrant and too obnoxiously intriguing for you to ignore.

Beginning and ending the album with tracks where the singer assesses the topic of family, ‘Dynasty’ and ‘Snakeskin’ embody the complex nature of this relationship for Rina; one that possibly even she herself hasn’t fully unpacked yet. ‘Dynasty’ as the opening track sets the scene for a body of work much different from ‘RINA’; with slick production and smooth, ethereal vocal lines, Sawayama returns as the same person passionate for a seat at the table, but now even surer of how she hopes to get there. Rina sings of ending the negative cycle of family issues that have been passed down from generation to generation against a backdrop of experimental ambient pop-rock; wave after wave of evanescence-like harmonies against abrasive drums replete with wailing guitar solo.

The album is a further reflection of Sawayama’s ability to connect her experiences to the world around her, and this is represented most clearly in show-stopping tracks such as ‘XS’, ‘STFU!’, and ‘Comme Des Garcons’. Coming from an academic background has lent Sawayama a sense of awareness and social responsibility that when coupled with her own experiences and unique musical sensibilities becomes larger than life.

‘XS’, a cheekily named track that belies an even cheekier critique on our current culture of excess features Rina’s signature 2000s pop sound punctuated by abrasive metal guitar riffs. Aimed at taking the piss out of the wealth and excessive capitalism that we all live in and actively encourage, Sawayama sings: “Flex, when all that’s left is immaterial/And the price we paid is unbelievable/And I’m taking in as much as I can hold”, interspersing such flashes of stark reality through several enlightening lines and the recurring, sudden guitar riffs; sandwiched between tongue-in-cheek bubblegum pop and coy, smoke-and-mirror lines.

On the album’s first single ‘STFU!’, the album’s metal influences come out to play in full-force, marking the most experimental, and for me the most memorable track on the record. Joining forces once again with long-time producer Clarence Clarity, the song addresses racial micro-aggression with ironic aggressiveness that is unrelenting from start to finish. With grungy, fuzzy guitars that make their way into every vibrating cell in your body and pointed lyrics calling out instances of racist small talk, this song is intended to make you feel uncomfortable, and I can think of no better approach. The discomfort is brought on by the unfamiliar territory of the nu-metal landscape Sawayama and Clarity have employed, but the listener’s position is rendered even more tenuous by spurts of pretty-as-you-please acoustic guitars entering at the bridge and Rina’s candy-sweet voice whispering ‘Shut the F*ck Up’ over and over in the chorus. I’ve always been a great believer in the relationship between the creation of discomfort and social change, and for me this song brilliantly creates enough discomfort and self-awareness to hopefully result in greater understandings of what defines situations of racial micro-aggression, and the impact they have on its victims.

‘Comme Des Garcons (Like the Boys)’ in short is a track in which the intelligent artist addresses toxic masculinity, also in a similarly tongue-in-cheek fashion to ‘XS’. Characterised by an inviting slap beat bass and Rina’s sultry vocals, the song’s melody lines draw once again on Sawayama’s 2000s inspired R&B vibes juxtaposed against a funky, disco inspired arrangement. The chorus says it all as Rina sings ‘Comme des garcons/Like the boys/Comme des garcons/I’m so confident’ with an air of haughty irony. Fun, flirty and ambitious, the song sums up Rina neatly on this three minute track. From her Japanese background to her fashion career; her cheeky nature to her thoughts on toxic masculinity, the song is one of the cleverest on the record in the way which it intertwines various levels of meaning to keep listeners coming back for more.

The album also includes more personal tracks which document Rina’s inner conflicts such as her battle with depression on ‘Akasaka Sad’, grappling with the concept of self-love on ‘Love Me 4 Me’, and coming to terms with her flaws on ‘Bad Friend’.

In particular, I loved the honesty of ‘Bad Friend’, a song on which Sawayama reflects on friendships she’s neglected in the past and acknowledges her mistakes. She sets the scene with bittersweet nostalgia and vocals rusty with emotion; followed by a crashing sense of self-reflection in the chorus which similar to Taylor Swift’s ‘Delicate’ uses the vocoder to create a sense of vulnerability and letting ones’ guard down. “So don’t ask me where I’ve been/Been avoiding everything/Cause I’m a bad friend’ Here the singer holds herself accountable by merely giving the reason that she’s a bad friend. No excuses, just the truth. And that in itself is a refreshing change.

The album reads much like Rina’s personal diary, as we see her display a range of emotions and retell a range of situations that are likely much closer to our realities than ballads about being in love or partying and getting high every night. In some places however, it would be good to see Rina leaving a little more unsaid, allowing the listener a little room for interpretation rather than trying to fill each and every available space with the message she’s trying to communicate.

However, all in all ‘SAWAYAMA’ is a daring record that sees the Japanese-British artist delve deep to produce not only a sound that is uniquely hers, but also further invest in promoting diverse representations of cultures and identities in ways few can muster. From her unique upbringing to her academic background to her fashion career to her musical influences, it feels like all of it cumulates on this tour de force of an album. Although there will always be room for artists’ growth, ‘SAWAYAMA’ feels like Rina is truly where she’s supposed to be at this point in time.