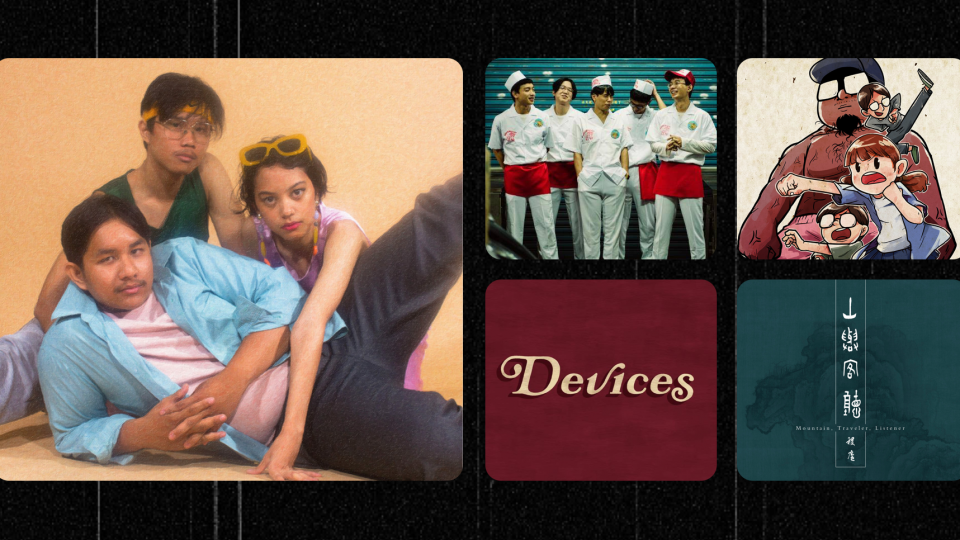 5 Asian Artists You Should Check Out (And Support) On Bandcamp

As we descend slowly (or quickly, depending where in the world you are) into what is surely for many unprecedented circumstances, we are faced with new sets of emotions and challenges that threaten to conquer and divide. Be it feelings of isolation, sadness, restlessness or the fear of being alone with your thoughts, we all need to give ourselves a break from these emotions to prevent burnout along the way. And what better way to do so than discovering some fresh new artists and giving their catalogs a new lease on life?

In collaboration with our friends at From The Intercom, we’ve brainstormed together a list of five Asian artists who are definitely worth doing a Bandcamp deep dive for during self-isolation time. A diversifying mix of natural vibes to those out of this world and everything in between, these artists will transport your minds past the four walls of your room and help you to see the light at the end of the tunnel. As always, Bandcamp is a great platform for supporting artists in a very transparent and direct way, and we hope that in return for the good vibes, maybe you can help support these well-deserving artists in whatever way you can. Our online version of crate-digging if you will. Happy finds!

In one of the only good things to come out of recent events, the environment seems to have begun its much-needed healing process. Raflum – a solo project from Sichuan – dedicates their music almost entirely to images taken from nature, inspired by classical Chinese poetry. Their latest album ‘山與客聽 / Mountain, Traveler, Listener’ deliberately avoids naming the songs, instead identifying them by their length, to allow the listener to create their own imagery upon hearing the track. Fusing neo-folk influences with the traditional notes of the bamboo flute, Raflum’s soundscapes transport the listener away from the noise of the modern world and back to the solitude of nature. Check them out here.

With dreamy blue Hawaiian vibes and an irresistible psychedelic groove that slips easily into your routine be it night or day, newcomers South Bad Boy are making a splash on the Taiwanese indie scene with their first EP ‘Southern Flavor‘. Composed of a mix of vintage rock elements and new-age electronica/shoegaze, its hard to place their music in a certain time or decade, making it perfect listening material for these troubling times. Why not close your eyes and let ‘Mr. Right‘s tropical, carefree vibes transport you to an unmarked beach with Pina Colada in hand, or let ‘Chasing You‘ teleport you to dreamy, heady nights of romance on the beach? Sentimental closer ‘It’s Just the End of the World’ rides the waves of ambiguity and melancholy with heavy-handed synths and electric guitars for a much-needed kick. Check them out here.

About a week ago, six-piece Manila-based alt-rock band Devices celebrated their fifth birthday–a momentous milestone for any indie band. However, instead of celebrating such a memorable occasion by playing a show, they’ve had to postpone many of their plans just like everyone else. That’s quite a shame, really–especially considering that throughout those five years they’ve slowly tweaked their sound to perfection. Drawing from synth-y 80s new-wave influences and the brash style of early 2010s alt-rock artists, Devices shines in their ability to make raucous rock songs that come packed with a sneering attitude. Vocalist Austin Tan’s impressively flashy rockstar vocals (“Conquistador,” wow!) are also especially noteworthy, bringing a certain standoffish charm to everything the band puts out. But on their most recent single, “Tell Me Is There Anyone?,” Devices truly delivers. A recent rebranding and a new mix bring forth grungy guitar work, glowing synths, and some kickass guitar solos to allow the band to truly reach new heights together as a group. The world may be focused on other things at the moment, but Devices will be ready (and rockin!) when it all blows over. Check them out here!

Before this year Chinese Football still had to describe the city they are from in metaphors – “it’s like the Chicago of China”. Not any more however, as their home of Wuhan has suddenly found itself the subject of conversation all over the world. However, while the current situation has meant a delay to the release of their third EP, now is a great time to catch up on their music history, all available on Bandcamp. Their first self-titled record back in 2015 introduced their style of gentle melodies and intricate guitar hooks, all based around the theme of the ‘Game of Life’, a motif carried through on their second EP ‘Here Comes a Challenger’ and latest release ‘Continue?’. In fact, while the current situation has prompted many people to re-evaluate their priorities in life, the lyrics of their title track ‘The Game Goes On’ offer a poignant optimism, “and yet we still choose to continue, even in the face of mysteries which seem impossible to solve…/‘when you raise your eyes to the sky, I can see the universe in your eyes”.

Grrrl Gang is the kind of band everyone wants to be part of. Formed over a break at school, the Indionesian trio of Angeeta Sentana, Edo Alventa and Akbar Rumandung specialise in mixing summery indie-pop tunes with searingly honest lyrics, capturing the highs and lows of growing up. Their latest album “Here to Stay” is a riot of guitar-led tracks and retro-pop art, covering themes from love and heartbreak to mental health to feminism (see: “Guys Don’t Read Sylvia Plath”). Since releasing their first songs four years ago, their meteoric rise has seen them go from student band to indie hidden-gem, signing to a record label last year and on the lineup to play at SXSW this year. Sadly, the current state of public health affairs has seen many of their upcoming gigs cancelled, so support them by checking them out on Bandcamp instead!