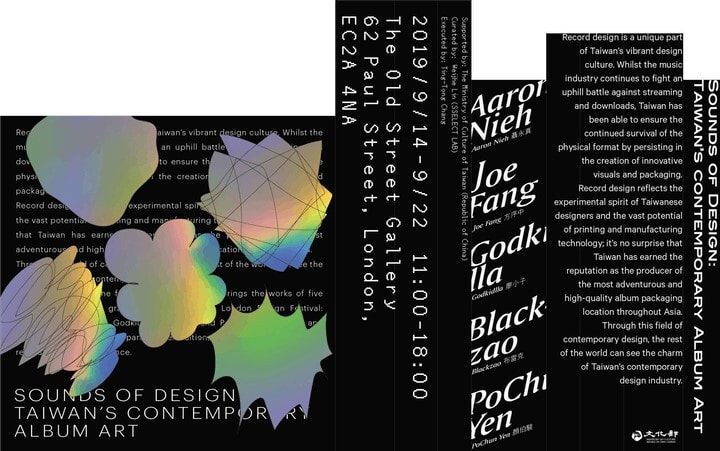 Special Thanks to: Ministry of Culture, Taiwan
Album Descriptions: Matt Taylor
Foreword: Jocelle Koh
​
In our streaming-driven world, the value of physical albums often elude the best of us. Yet although the CD as a medium seems to somewhat have lost the functionality it used to champion, the Mandarin music scene has truly taken album design to the next level, embedding it deep in any hardcore fan’s music appreciation process.

The efficacy of printing in Taiwan combined with the free-flowing creativity on the scene has spawned new takes on album design that mash together concepts of progressive design and form promulgated by Western album art, whilst retaining the care and luxurious quality of these treasured pieces of merchandise as seen in Eastern music scenes.

Come with us as we delve into the stories behind the designs of some of contemporary Mandopop’s most well-loved and iconic albums; namely milestone works by Hebe Tien, A-Mei, DJ Didilong, Easy Shen and Fleshjuicer.

Although being a singer is perceived to us as a life of glitz and glamour; to those who know better, sometimes they instead desire for one of pure simplicity. Hebe Tien (田馥甄) – one third of Taiwan’s most famous girl group S.H.E – understands this feeling more than most, and decided to explore this concept on her fourth solo studio album. To enjoy and savour the most trivial things in life is to understand that nothing is permanent, and even the small tasks and feelings should be treasured.

The packaging pays homage to the concept by taking care with even the smallest of details. A combination of bright and simple colours and minimalist design, the album brings together elements of engraving, hand-stitching and a variety of textures and symbols to create something extraordinary from the ordinary.

In the face of paranoia, only the paranoid survive. On this record, Taiwan’s National Treasure A-Mei (張惠妹) explores her belief that paranoia is an essential part of the person, and that without it, destruction cannot lead to rebirth.
​
The design and packaging enhance this concept. Set against a backdrop of white to represent purity and clarity; A-Mei takes us on her journey, revealing slowly the shades that lay behind the white facade, stained with the fear and anxiety present deep in our psyches. Song lyrics are printed on individual pages with their own unique paper, allowing the listener to tangibly feel the emotion of the song. Through exploring the intricacies of the packaging, one may further appreciate the complexity of this album’s content.

Taipei is the home of dreamers. Its youth have the courage and ingenuity to grind in Taiwan’s capital city despite adversity; creating countless possibilities and a better future for Taiwan. Representing this new generation, DJ Didilong (李英宏) wanted to use the Taiwanese language to tell the raw stories of blue collar life in Taipei.

The design of the artwork and packaging reflect the gritty yet endearing reality of Taipei. The fonts are in one sense graffiti; yet conjure up images of how workmen search for construction labourers, spraying job notifications on iron fencing across the city. Taipei’s manmade visual scenery is juxtaposed between day and night. Stickers and flyers plastered throughout; whilst not traditionally thought of as a conventional aesthetic, it is the iconic aesthetic of Asia’s most liberating city.

Often we consider there to be a necessary separation between the spiritual and the physical, when in reality, they are uniquely interconnected. Taiwanese indie singer-songwriter Easy Shen (沈簡單) wanted to explore this relationship on his eclectic 2015 record. Titled after the Buddhist concept that believes in no permanent human soul, the record explores the spatial relationship between the human body and the outside world. When the body has desires and needs, we can react it accordingly, but when the soul needs help, how can its sickness be remedied?
​
From a design perspective, the art and packaging explore the factual realities of the human body, yet combine it with the intangible art and creativity that only the soul could be responsible for. Like the heart in the body, the CD itself exists in the centre of it all.

Could you imagine that the underwater world is as beautiful as the depths of fairy tales, or that ocean science is as profound as the vast universe? Taiwan heavy metal rockers Flesh Juicer (血肉果汁機) who say their spirit comes from Taiwan’s temple music, explore the consciousness of the seas on their most recent record.

The album experience combines music and technology to create a uniquely packaged product. Within the CD case lays a battery, which allows the case to light up in a kaleidoscope of colour. Furthermore, the album comes with night lights to allow to packaging to become a functional tool. Within the folds of card the listener will also find a holographic projector which allows the user to project a music video onto any surface.

To find out more about the stories behind these album’s designs and designers, head on over to London’s The Old Street Gallery for the Taiwan Ministry of Culture’s ’Sounds of Design: Taiwan Contemporary Album Art’ exhibit!