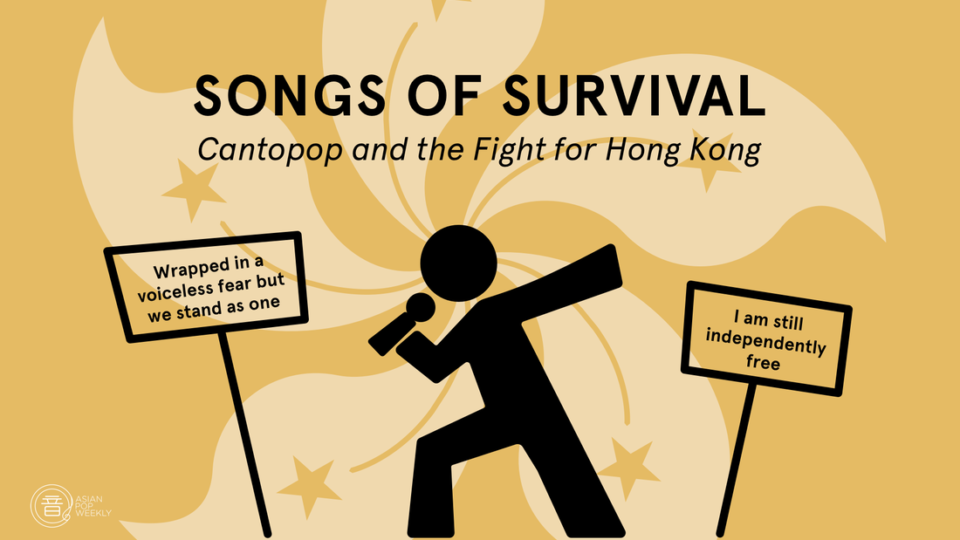 Songs of Survival – Cantopop and the Fight for Hong Kong

Editor’s Note: Following on from our ‘Songs of Defiance‘ piece on LGBTIQ Mandopop, the recent Hong Kong protests caught our attention and made us think about the Cantopop canon in a new light. If ‘Songs of Defiance’ define the spirit of musical and societal interactions in Taiwan, ‘Songs of Survival’ truly represent Hong Kong’s brand of fighting spirit.

The word ‘Cantopop’ is one that immediately brings to mind legends such as Sam Hui 許冠傑, Anita Mui 梅艳芳, and Jacky Cheung張學友. A symbol of Hong Kong’s reputation as the cultural powerhouse of the Chinese-speaking world in the 1980s; these artists and many more were the embodiment of a cultural and economic golden age with their soaring ballads, irresistible dance numbers, and elaborate over-the-top performances. By the 1990s however, the rise of China as a potential market and the impending handover of Hong Kong to the Beijing government seemed to have set the industry on a seemingly irreversible decline.

As such, it makes sense that contemporary iterations of Cantopop are also inherently political – an intrinsic barrier to the Mainland’s Mandarin-language culture homogenization efforts. In a fight to keep alive Hong Kong’s uniqueness and autonomy as a nation; people are clinging to Cantopop in a last-ditch survival effort to express their identity and be heard.
​
Especially given the recent protests surrounding a controversial extradition bill, Cantopop is emerging more and more as a critical mouthpiece for the people of Hong Kong. Here we look at the ways Hong Kongers are using the Cantopop canon to make their voices heard.

In the background of protests, familiar protest-anthems are blasted from loudspeakers and sung by crowds. Whilst in the west protest music is often edgy and subversive, one of Hong Kong’s most famous protest songs is instead a golden hit known across the region – a song called Boundless Oceans, Vast Skies 海闊天空 by BEYOND. A sweepingly large rock power ballad, lyrically the song deals with the themes of personal freedom and the pursuit of dreams. For over two decades, protesters have taken the lyrics to represent the soul of Hong Kong and the strength and determination of its people (I have faced the chilliness of rebuffs and sneers at many occasions, but never have I given up the hopes and ideals in my heart / I am still independently free. I will be always proudly singing my song and travelling thousands of miles).
​
Similar to this, another rock ballad The Egg & the Lamb雞蛋與羔羊 by Kay Tse謝安琪 became a staple of Cantopop protest music in 2014 when it was featured in the annual July 1 protest to criticize Hong Kong’s handover to China by the British government. The song’s lyrics encourage people to fight fervently for their rights together (an egg hitting a wall will break into pieces, how can it compete? / a pile of eggs hitting a wall can become a force-field that keeps expanding).

In observing these 2019 protests, it certainly evokes memories of the 2014 Umbrella Revolution雨傘運動, where the autonomous administrative region was brought to a halt by young people demanding universal suffrage. Synonymous with this movement was the well-known song Holding an Umbrella撐起雨傘. A flurry of some of Hong Kong’s most vibrant musicians including Deanie Ip葉德嫻 and the late Ellen Loo盧凱彤 were able to capture the zeitgeist of this movement in this piece. Written and recorded in less than 48 hours, it was primarily a response to the use of force by the police, and is not only encouraging those taking part to fight on, but to do so via peaceful protest. Five years later, this song is being sung yet again and takes on even more meaning given the violence and police brutality that the peaceful protesters were met with (Wrapped in a voiceless fear but we stand as one with our umbrellas, new dreams begun / Reaching for every right that belongs to us).
​
​And yet Cantopop’s involvement in these protests are not just skin deep. Other than being used as an empowering soundtrack on the frontlines, seminal Cantopop musicians and singers are some of the key players. Denise Ho何韻詩 is an example of this; after being arrested for taking part in non-violent political protests, she bore the brunt of Chinese retaliation. The Hong Kong people, appalled by this, rallied behind her and she sold over 50,000 concert tickets for her crowdfunded tour. Now, she is a vocal and passionate advocate for Hong Kong’s pro-democracy movement, and is one of the most visible democracy allies on social media. Similarly, Anthony Wong黃秋生 has become known for speaking up in support of Hong Kong’s democracy movement alongside being critical of China – he recently scored a hit with song Is It a Crime which criticizes Beijing’s handling of the Tiananmen Massacre.

As for if this round of protest has spurred on any budding artists to write the next Cantopop protest anthem, a quick search on YouTube reveals that many amateur musicians have been inspired to write songs in solidarity with their fellow citizens (A few examples herehere and here); or even adapt well-known English songs for the event. For example Do You Hear the People Sing? from the musical Les Miserables, had new lyrics written by protesters, and has been heard commonly over the past weeks (When it’s our birth right to have the zeal and the right to decide / who would choose a hopeless voiceless stance?)

Indeed, with further protests planned demanding full retraction of the bill and the resignation of Governor Carrie Lam, perhaps musicians will once again band together to create Holding an Umbrella part two?

Thus, the voice of Cantopop and of Hong Kong both at home and abroad is one of freedom; and has been the case even during its golden era. The Queen of Cantopop Anita Mui routinely eviscerated the Chinese government during her live concerts by co-opting the revolutionary song Blood Stained Glory血染的風采, which has now caught on as an emblem for the fight for Hong Kong in protests over recent years (Perhaps I’ll bid farewell and never to return, can you comprehend? / If it’s to be so, grieve not, the flag of our Republic has our blood-stained glory).

On display for the world to see in Hong Kong’s fight for survival is not just the vibrant Cantopop canon and how songs made more than 25 years ago remain dangerously relevant in the current political climate, but also the ingenuity of Hong Kong people and the use of the Cantonese language as a tool to take songs originally made in other languages to represent the struggle in the fight for Hong Kong. Cantopop is a powerful weapon in Hong Kong’s cultural arsenal. Whilst we may typically think of its golden era as now long gone, in reality, we see its existence, evolution and continuation more integral to what it means to be a Hong Konger more than ever before. Protest music is not just a part of Cantopop, Cantopop itself is protest music; singing a song of survival that leaves a lasting legacy.