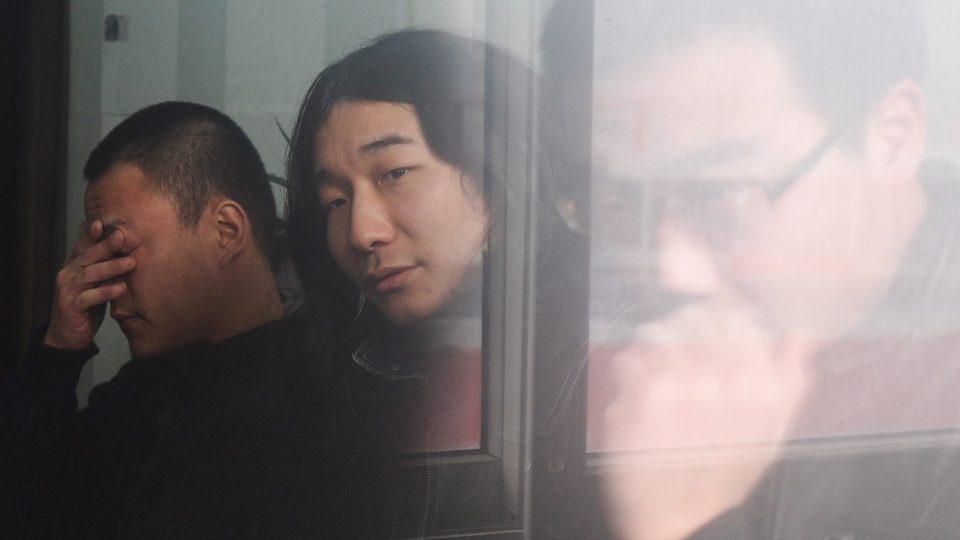 Better than Bob Dylan, Dua Lipa, and Red Velvet—that was the consensus of users on Douban, an online ratings platform, when they picked Omnipotent Youth Society 萬能青年旅店‘s sophomore album Inside the Cable Temple冀西南林路行 as the Top Record of 2020 with a score of 9.2 out of 10. That win came 10 years after their self-titled debut album won Douban’s Top Record of 2010.

“I listened and listened, and I cried,” one listener’s comment from 2020 reads under Inside the Cable Temple on Douban. “A true reflection of how most Chinese youth feel, this is the kind of realism we need in music,” another wrote under the album on YouTube last year. Ten years on from taking the Chinese rock music scene by storm, OYS is still earning new fans with music that channels the impact of rapid economic growth on their hometown of Shijiazhuang and the pitfalls of modern life in urban China—overwork, environmental degradation, and de-industrialization.

At first glance, OYS doesn’t seem particularly representative of the millennial musician. The band has updated its Weibo account three times in the past two years, and the members have hardly given any interviews over their 20-year career. Its alternative rock sound, interspersed with lengthy instrumentals and a rebellious disregard for the radio-friendly four-minute track, is a far cry from the highly produced, highly publicized artists that dominate Chinese (and global) contemporary music scenes: such as teen heartthrob Jackson Yee易烊千璽, whose record Back Seat Theater後座劇場 came in at number seven on the 2020 Douban list.

Formed when the band members were teenagers back in 1996, the quartet of lyricist Ji Geng姬賡, trumpeter Shi Li史立, drummer Yang Yougeng楊友耕, and lead singer Dong Yaqian董亞千 have been heralded for emerging during a lull in the domestic rock scene as foreign artists flooded the Chinese market. At the time of writing, they’ve sold over 400,000 digital copies of their latest album on music streaming platform NetEase.

The band’s rise has been fueled by their down-to-earth lyrics and powers of observation. Rather than the idealistic depictions of love favored by Mandopop, OYS channels a sense of unease about what the future might bring. Its songs address with honesty the cost of modern life, and millennials’ feeling of exhaustion at having to deal with issues their parents’ generation could never have predicted.

The band members’ hometown, Shijiazhuang, is central to their inspiration. The city, capital of Hebei province, was widely known as one of the most polluted cities on the planet during the 2010s—in 2017, the Ministry of Environmental Protection labeled Shijiazhuang as having the highest average reading of PM 2.5 in the country.

The city has also declined from an important manufacturing hub in the 1950s and 60s (when it was known as the “medicine capital” with one of the nation’s largest pharmaceutical companies, North China Pharmaceutical Group, headquartered there), as market reforms brought new competition and the lure of higher wages elsewhere. This saw many young workers leave Shijiazhuang, a fate not uncommon for cities outside of the Yangtze and Pearl River Delta’s where China’s economic take-off first began. “Some people had to leave, some people were able to stay, but probably overall more left than stayed,” the band members reminisced in an interview with GIGS magazine in 2012, talking about what happened to the friends they grew up with.

OYS’s songs are infused with the colors and motifs of the city, as well as its sense of stagnation. The band sings on “Pained Laughs and Endless Daydreams 揪心的玩笑與漫長的白日夢” from its latest album: “Who is born from the mountains and hills, the rivers and seas/Yet ends up tied down by the dawn and dusk, by the kitchen, by love.”

Many fans who have grown up seeing similar changes in their hometowns see their own lives reflected in the band’s music. Eschewing their parents’ optimism about the possibility of upward social mobility, this generation has instead tried to come to terms with long working hours and the daily grind. Commenting on the ironic idealism of the band’s name in a rare public interview in 2018, Ji acknowledged to Southern People’s Daily that “we stopped feeling that [sense of omnipotence] a long time ago.” Tapping into the “sang” subculture popular in the 2010s, which celebrated embracing hopelessness, and later the concept of “involution (内卷)”—describing young people’s skepticism that working hard pays off—OYS’s lyrics are “written about me, written about everyone,” one fan wrote on Q&A platform Zhihu back in 2016.

“Kill That Guy from Shijiazhuang 殺死那個石家莊人,” the stand-out single on OYS’s first album, captures this sense of monotony and frustration with lyrics describing a generic family sustained by the factories: the father who goes to work and comes home and drinks beer; the mother who visits the market for food, the son who feels trapped inside his school classroom. But it’s the mood change of the soaring chorus that has made this song a must-sing for any Chinese street busker with a suitably husky voice, as Dong sings of how a single event changes the family forever: “Their lives had been like that for 30 years…until one day the sky fell in.” The band members are notoriously reluctant to explain the meaning behind their lyrics, but in December last year Jiemian quoted Ji referring to this now famous line as speaking to “the tragedy of modern life…how passion and self-confidence are slowly eroded as you grow up.”

But OYS’s appeal goes beyond those who see their stories reflected in their lyrics about growing up in China’s lesser cities, and their sound has inspired a number of other artists. Pop superstar Hebe Tien田馥甄 has covered their songs in her concerts, while Taiwan’s breakout rock band No Party For Cao Dong草東沒有派對, which has also achieved widespread acclaim on the mainland, has been labeled the “Taiwanese OYS.”

The band has also shifted direction with the times: from meditations on the vulnerability of humans in the face of change, to a focus on the power and beauty of nature in its second album. That album was inspired by a train ride the bandmates took through the Taihang Mountains in Hebei province in 2013, according to Ji’s interview with Southern People Weekly in March 2021. Passing a traditional village at the foot of the mountain, Ji noticed a huge man-made stage on the opposite slope and was struck by the dichotomy of the image—this became the foundation of the record (the Chinese name of the album literally translates as “Journeying Through the Forest Roads of Southwestern Hebei”).

There are odes to the relationship between humans and nature: like “Muddy River 泥河,” a stomping folky number; and “Quarry 採石,” which begins in a bluesy styles and gradually builds up into a cacophony of saxophones and what sounds like white noise, transporting the listener into the centre of an exploding mine-pit. “The moonlight melts the iron stars, and casts my heart and soul,” the band croons on “Cable Temple 郊眠寺,” a gentle repeating lullaby that rounds off the album.

“At the end of it all you still have to ask yourself, ‘Who am I?’ ‘What am I doing here?’ ‘What kind of age am I living in?’” Ji told Southern People Weekly last year, commenting on “Cable Temple.” If OYS’s first album searched for meaning in the minutiae of everyday life, their second album deliberately places humans back in the natural environment to ask even deeper questions about existence, just as Chinese society begins to look past rapid industrial growth and at wider questions of how people and nature can exist in harmony.

While the smog in Shijiazhuang has begun to subside in the 12 years since the band’s debut, and parts of Hebei province have hosted events in the 2022 Winter Olympics, OYS (now affectionately nicknamed “Omnipotent Grandfather Society” by fans) still find inspiration in its home region, and still manage to reflect the emotions of its fans in its music even as it approaches mainstream success. The city government even awarded Ji a “specialist grant for exceptional professionals of Shijiazhuang” in recognition of how the band’s work has raised the city’s profile.

During the past two years, several covers of “Kill That Guy from Shijiazhuang” have reached over 10 million views each on video streaming platform Bilibili, while The Paper praised the latest OYS album for “portraying our era and the great changes in society, and the rift between humans and nature.” They are also due to headline Chengdu’s Genki Forest Music Festival in May.

The band’s songs might not lend themselves to Douyin-friendly snippets, but in its once-a-decade records, somewhere between the poeticism and clash of guitars, OYS is able to replicate through music a landscape which seems familiar even to those who have never been there.

But for now Dylan, Dua Lipa, and Red Velvet can breathe a sigh of relief. They won’t have to go head-to-head with OYS for at least another ten years yet.