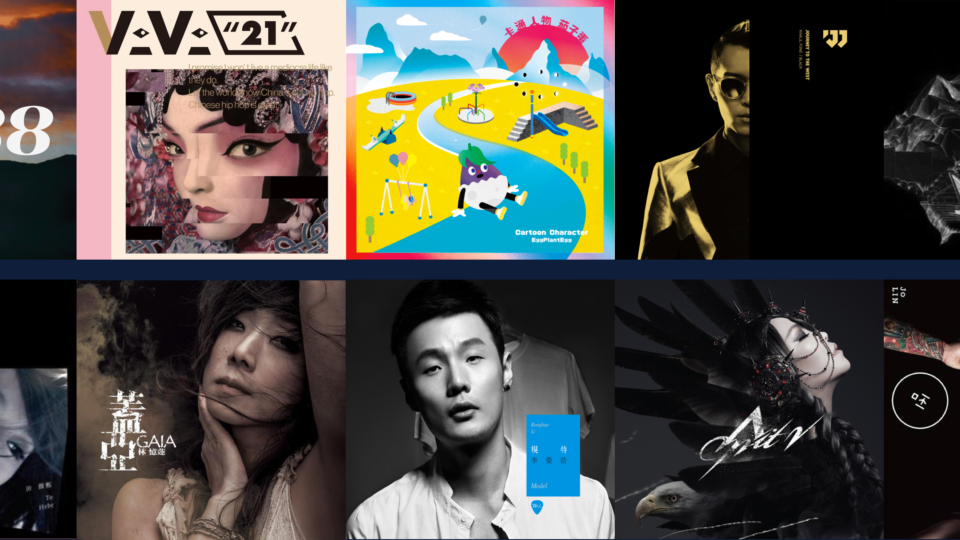 As we see the end of a decade inch closer by the minute, we wanted to create a list like no other. No generic end-of-year lists, or spiralling lists of tracks upon tracks that you’ve probably not even heard of. As Asian Pop Weekly celebrated its tenth-year anniversary earlier this year, we are honoured to have witnessed the transformations of the Mandopop scene over the last decade from a front row seat. From an industry making the hard transition from its waning pop adolescence to a scene sure in its authenticity and creative potential, there is much to be said for the decade that was.

We’ve tasked ourselves with the gargantuan task of selecting ten albums that have defined this decade in one way or another. Whether it be a homage to some great signature strains of Mandarin pop, or a seminal work that heralds in a new age of feminism, these albums have made OUR decade, and for what it’s worth, we hope it made yours too. Happy new year!

Arriving at the start of the decade, in many ways ‘SHERO‘ represented both beginnings and endings. Whilst the sound of pure, unadulterated pop may have been nearing its end by the later 2000s, S.H.E. celebrated this, incorporating both eastern and western elements to create undeniably catchy songs. SHERO also saw S.H.E take girl power to new places, not only exploring and embracing mature femininity, but also a more assertive feminism, imploring women to become their own heroes.

To be in charge of one’s own destiny was a defining feature of band member Hebe Tien’s debut ‘To Hebe’. Released in the same year, the record was sonically a world away from what she had been a part of just months earlier. Dedicating the album to herself, ‘To Hebe’ saw Hebe take charge of her own destiny, sharing her thoughts, ideas and concepts over mature and intricately crafted pop songs with unforgettable melodies.
​
From SHERO and beyond, S.H.E and Hebe approved themselves to be an integral part of Mandopop herstory.

Already one of the most important figures in both Mandopop and Cantopop, Sandy Lam rewrote the rulebook on her 2012 record ‘Gaia蓋亞’, breaking the mould for what a Mandopop album could be.
​
Gaia was a concept record which saw Sandy take on the guise of mother-nature herself, and saw Sandy lament at what humans have done to the world. Filled with themes of nature, life and faith, the record was boldly experimental and a world away from previous releases. The risk of releasing such a potentially polarizing record was ultimately worthwhile: Gaia was praised not only as a triumphant comeback, but held up as a landmark album in Mandopop, and was lauded by critics as one of the most forward-thinking and ground-breaking mandopop records in history.

Whilst Gaia may be a challenging record requiring multiple listens to truly understand the brilliance of the kaleidoscope of sounds and topics on display, the pay-off is absolutely worthwhile. This record not only saw Sandy at her most creative, but also set a new course for what Mandopop could ultimately be.

Although Li Ronghao 李榮浩 spent the first ten years of his career writing and producing for stars such as his now-wife Rainie Yang, it was with his 2013 debut album ‘Model 模特’ that he sent shockwaves through the Mandopop industry. Although not a big name at the time of release, it was his securing of five nominations at the 25th Golden Melody Awards and subsequent watershed win of Best New Artist that sent a signal to the industry that a new generation of Chinese musicians are ready to challenge Taiwan’s long-held reputation as the home of popular Mandopop.

Although a controversial choice at the time, it’s not hard to see how ‘Model’ was a dominating force in 2013. Earning him comparisons to artists as wide-ranging as Eason Chan and John Mayer, the record was a ten-track collection evidencing that not only is Li an emotive and convincing singer, but his credentials as a producer and songwriter are second to none in China and the wider Mandopop world. A breezy and sophisticated collection of western influenced guitar driven indie pop offering a contemporary take on big city love and life with easily relatable lyrics, Li Ronghao and ‘Model’ ushered in a new era of sing-songwriters from China into the industry mainstream.

Whilst she may have been known previously as Taiwan’s Pop Princess or a Dancing Diva, on 2014’s commercial blockbuster ‘Play 呸’ Jolin Tsai 蔡依林 proved beyond doubt that she was worthy of another title; the reigning Queen of Mandopop. An artistically crafted bulletproof collection of hits, Jolin explored the boundaries of commercial pop by melding a variety of genres over euphoric melodies and soaring choruses.

It wasn’t just the breadth and quality of the production that set ‘Play’ as a defining album of the decade however: the songwriting on display across the ten-track record saw Jolin directly address topics such as feminism, gender roles, LGBTQ equality, and delivering critiques on contemporary society and its obsession with commercialism and vanity.

‘Play’ is not only Jolin’s magnum opus; it’s a celebration of Jolin herself. Vulnerable and beautiful yet powerful and intelligent, the dedication to her craft and her willingness to voice her thoughts and opinions over irrefutable dance-pop was an audible and visual triumph, and the record solidified her as both a gay icon and champion of women and minorities.

Is AMIT really the alter ego of Mandopop Queen A-Mei 張惠妹, or did we witness her unleash her original authentic self? Based on her indigenous Puyuma birth name Kulilay Amit, 2015s AMIT2 captures the essence of what it means to be a minority in Taiwan – be it indigenous, female or queer – vocalizing the anger and resentment to be the recipient of this historic repression.

AMIT2 is a rich and multi-faceted record, inheriting the rebellion and violence present on 2009s AMIT and ramping it up to a bold and shocking new level. An altogether more elaborate affair, AMIT2 is angry and defiant, offering scathing critiques on a variety of controversial topics, from rallying against heteronormativity to delivering a feminist outcry in the face of societal repression against women.

Whilst it may be easy for some to write-off AMIT2 as obscene, weird or grotesque, scratching the surface and taking time to understand the background of the record reveals it to be an avant-garde, complex call to arms against exploitation.

With AMIT2, A-Mei proved herself not just as one of Taiwan’s most important musicians, but saw her successfully reintroduce herself as an indigenous artist and feminist activist capable of revolutionizing the soundscape of Mandopop.

With gritty, raw and almost grotesque lyricism and howling vocals that pierce straight to your soul, No Party For Cao Dong is a post-rock/metal phenomenon who are widely seen as a musical representation of Taiwanese contemporary society. In their critically acclaimed debut album ‘The Servile 醜奴兒’, they touch on many themes such as societal discontent and Taiwanese independence with a directness that is refreshing, often depressing, but also heartening in its deeply personal etchings of reality. If there ever was a band who could represent the complexity of life in contemporary Taiwan for the younger generation, it would be No Party For Cao Dong.

Making a name for himself as the shy, bespectacled crooner who introduced the Mandarin music scene to authentic R&B, Blues and Soul, Hong Kong singer-songwriter and producer Khalil Fong showed that he was only just getting started with his 2016 album ‘JTW’. As his last full traditional album, ‘JTW’ saw Fong reinvent the wheel once again; progressing from following the conventions of high-quality R&B/Soul/Blues to incorporating Eastern elements in his music like the Mandarin music scene has never seen before. Featuring some of the contemporary Asian music scene’s most outstanding and exciting acts (Crush, Zion T., Diana Wang, Fifi Rong…) and experimenting in the most versatile of ways with how to most seamlessly blend Eastern musical flavours, elements and themes with that of the West, Fong has cemented his place as a frontrunner in bridging cultural divides between the East and the West with this album, and continues to with his new label FU Music. It’s clear for this pioneer, the best is yet to come.

A struggling indie band who made the big time with their Getai-influenced brand of Taiyu dialect pop-rock, Eggplantegg is not your average Taiwanese band. Invoking sometimes humorous, sometimes grittily realistic perspectives in their music combined with fleshed-out, larger-than-life melodies, their debut album ‘卡通人物 Cartoon Character’ is a seminal record that propelled the Taiwanese indie music scene to further regional recognition, and continues to bring much-needed awareness and interest to the Taiyu dialect. Shirking the norms of creating balladic dialect music, the band took matters into their own hands on this record, creating a sound that was quintessentially Taiwanese – but from a fresh, youthful perspective. A band and album that defeated the odds to become both commercially successful and critically acclaimed on an indie budget, their actions speak more than words not only for their future as a band, but for the future and possibilities for other indie artists in the Mandarin music industry.

A female rapper with femininity and bravado in equal amounts, Chinese rapper Vava’s success is testament to some of the most exciting and interesting trends influencing the Mandarin pop scene in the last half a decade. Dubbed the ‘Mulan’ of rap for her brash and sassy rap flow, she rose to fame after competing on the first season of Mainland reality competition ‘Rap of China’, and quickly became the face of Chinese Hip Hop thereafter. Her debut album ‘21’ which documents the then-21 year old’s story is brutally honest, and intimately links Chinese hip hop’s rising global popularity with a new strain of positive female representation. The album also acknowledges the Western roots of hip hop whilst incorporating Vava’s uniquely Eastern Hip-hop spin into the mix; most notably on ‘Crazy Rich Asians’ soundtrack chart-topper ‘My New Swag’. Ultimately, Vava represents a scene at an exciting crossroads. Where mainstream reality shows can create authentic stars, and feminism plays an integral part in the ascension of hip hop, the future is bright for Mandarin hip hop with Vava at the helm.

As one of the freshest acts to appear on the Mandarin music scene in the last five years, Jazz/R&B artist 9m88 is by no means a sign of what trends will influence the scene next. She is, however, an anomaly whose clear diversion from the norm and popularity despite consistently breaking the mold shows sign of an industry and audience who are hungry for creativity, diversity, and change. With her Jazz/R&B/Hip-hop debut album ‘Beyond Mediocrity 平庸之上’ in tow, the artist eclectically but seamlessly touches on themes such as cultural fluidity, feminism and life in ways that cement the importance of authenticity and creative integrity in the decade to come. A piece of work which seems incomplete by just listening to one of the tracks, Baba’s humanity and complexity shines through in ways that also speaks to an audience looking more critically for meaning in the music they consume.