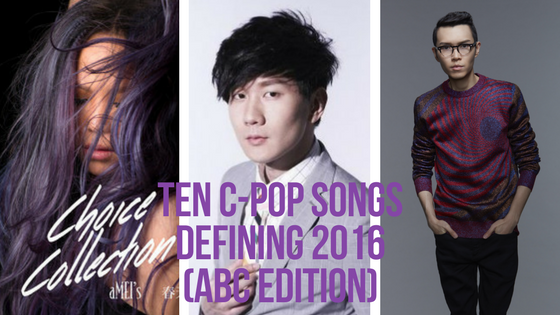 ​A little late, but better late than never, right? First of all, I’d like to wish all Asian Pop Weekly readers a very happy new year! As things have been hectic over the last couple of years, loyal readers may notice that the Asian Pop Weekly website has settled into a stable rhythm of posts such as news articles, lyric translations, interviews and album reviews, but I feel like it’s time to step things up a notch in terms of the amount of feature articles available on this site. So my resolution this year is to keep APW going strong, and to add a little pizzazz to our content just to spice things up.

In lieu of such a statement, I figured that I might as well start off with one of those ‘listicles’ which are so popular at the moment, a listicle of my top 10 C-pop songs of 2016 recommended especially for ABCs (individuals of Asian heritage living in Western regions), or basically for any English speakers who are interested in learning more about Chinese music. While some of these songs may not be the biggest C-pop hits of 2016, they’re nevertheless a great selection of tunes, mostly by artists with offerings friendly to the international market which will certainly be a pleasure for your ears. So without further adieu, let’s get into it!

For fans of Mandopop Queen A-Mei, her rearrangement of her 1996 hit ‘Sisters’ was released this year, and acts both as a hit of nostalgia for those of us who lived through the C-pop Golden era of the 1990s-early 2000s, but that’s not all the song’s about. A-Mei expressed that she mulled over the idea of revamping the song for years before she decided to take the plunge, and given her reputation as an avant-garde, rule-breaking artist, this song was more than just a commercial money-grabbing scheme. Opting this time to go with a simple acoustic guitar arrangement, A-Mei’s effortlessly clear and sweet voice envelops ones’ earbuds as she delivers a message for society, one of hope, love and solidarity. Listen out for her beautiful spoken message near the end of the song. Nostalgia and a real heart-warming message that would not be lost on listeners given how 2016 turned out.

Many may say I’m biased, but given my long-time appreciation for singer-songwriter Lara Veronin, her new single ‘Where Do We Go’ released in December 2016 had me clapping my hands in anticipation and glee at the prospect of an upcoming album. Going with a new, experimental sound, Veronin has infused electronic elements to come up with a mysterious, more mature air that was not apparent in her previous albums. I am even more a fan of the Soul/Lounge style remix of the song which blended her full yet sweet vocals with jazz-influenced keys, soulful riffs on the guitar and a special rap by Smashregz rapper Troutfresh, taking my listening pleasure to an all-new high.Who knew hip hop rap and Soul/Lounge genres could meld so delightfully together?

From the first time I heard Waa’s 2016 single ‘Only You’, I was mesmerised by its bittersweet yet innovative melody and lyrics. For those of you who can’t speak Chinese, no worries because this song is only 30% in Chinese. With a hook in the chorus composed entirely of phonetic sounds rather than actual words and the rest of the chorus in the Taiwanese/Hokkien dialect, Waa shows that you don’t have to understand Chinese to love her music. If you do understand the lyrics however, they are bittersweet, made even more so by her unique, whispery vocals. A standout point of the song for me was the hook sang entirely in gibberish, a high, soaring tune which really gave the song a folksy, indie vibe. With this song, Waa shows off her one-of-a-kind vocals and proves her worth as one of the reigning members of royalty amongst the independent music community in Taiwan.

In my honest opinion, Eve Ai is one of the most talented singer-songwriters of our generation. With a husky, soulful delivery, Ai writes songs which go straight to the core of the human experience that work perfectly for anyone who she writes for, but sound like heaven when sang by hers truly. “The Sum of Us”, the first single from her 2016 album proves the mettle both of her voice and songwriting abilities simultaneously and has been lauded nation wide by other critically acclaimed songwriters such as HUSH for its beautiful quality. Accompanied only by an acoustic guitar, Eve’s gentle yet throaty vocals provoke a mix of heartache and serenity tinged with melancholy. I rarely use the word ‘beautiful’ to describe music as I feel it is too broad and vague, but I’m making an exception this time around.

​Bringing an optimistic, serene blend of folktronica and ambient music to the Taiwanese music scene, indie singer-songwriter Zooey Wonder has emerged from the woodwork as one of the most promising newcomers of 2016. After an extended break from the scene due to vocal chord issues, she’s back making music her way, using crowdfunding as a means to round up support for her upcoming album. Her first single “Wonderland” marks the first time (according to my knowledge) an independent Taiwanese artist’s works have been included in a Western production; selected by award-winning director Armando Bo to be included in his short ‘Lifeline” starring Wang Leehom and Olivia Munn, the song reflects Zooey’s message of peace and kindness, and her belief that goodness remains at the core of every person’s soul. With a voice that is simple yet clear and warm and an electronic sound which skilfully layers elements which come together to create a song full of warmth and love, this artist is one to look out for in 2017 too. Cannot wait for her album to finally drop in March!

5.Jane Zhang – Dust My Shoulders Off

Yet another cross-cultural collaboration has made Asian Pop Weekly’s list; this time it is talented singer Jane Zhang’s single “Dust My Shoulders Off” which marked her official debut into the Western music market. Collaborating with Timbaland and Jim Beanz on the track, the song features cute-yet-sassy acapella backings with a snappy beat as Zhang sings about bad day scenarios and dusting her shoulders off. For me, the highlight of this catchy song was Jane’s ability to transcend the generic vocal stylings of Chinese pop, truly embracing and making the track her own. With her sass and class, her awesome vocals did not sound out of place in the international market whatsoever, so a big thumbs up from me. An understated, but extremely well executed effort, all done in a way that suited Jane.

4.Nick Chou – So Handsome We Broke Up 帥到分手

This song is definitely my guilty pleasure track of 2016. From the moment I heard it, I thought, ‘this is so Simple Plan/Avril Lavigne’, but there was just something about the song which kept me coming back again and again. Working with Bassjackers on this new album and this song in particular, Nick Chou has created a immiscible mixture of EDM Rock in this song with a catchy tune that I just can’t get out of my brain. His throaty, boyish vocals also have me swooning. Just a little.

Next on my list is fellow Singaporean JJ Lin’s chart-topping hit “Twilight”, which I feel traverses the gap between mainstream pop and credible music perfectly. Taking a step back from his usual C-pop ballad efforts (the singer-songwriter practically invented the C-pop ballad), JJ’s use of the dummy recording method and his leap of faith towards a less conventional song-writing style has paid off big-time. Forgoing his usual melismatic, showy vocals, Lin opted for clean, soaring vocals this time around, pairing it against a charismatic, dramatic yet sophisticated orchestral sound. With a unique melody that is characterised by huge note jumps, JJ showed that he can do more than just write conventional ballads, challenging himself and showing that soul and authenticity can win just as many votes when done the right way.

One of the biggest runaway hits of 2016, the second last song I’m about to recommend is none other than Diana Wang’s ‘HOME’. This is a song that I’ve had constantly running through my head since the moment it was released; it’s a catchy, awesome foray into the Western music market, and could not have been sung better. Marking Wang’s first release with Cros Music, this was the release which for me set in concrete her musical direction. Working with producer Skot Suyama, his catchy melody and the sentimental lyrics came together perfectly, and together with Diana’s pretty yet versatile vocals were enough to clinch millions of hits on YouTube despite it being an English single in a cluttered Taiwanese market. Furthermore, given Diana’s international background, this bodes well for future digs at entering the Western music market. Especially given everything I’ve been through this year, this song hits especially close to ‘home’ for me (pun intended). Diana’s voice and her personal background make this song relatable for anyone who’s ever felt homesick, yet wishes to continue chasing their dreams. After taking almost ten plane rides in the last three months, I’ve found myself more and more frequently humming the tune of ‘HOME’ wherever I go. And as I write this, sitting on the final plane ride back, I realise that this song has taught me so much about appreciating that sense of safety and security that comes with going home in the last year. Definitely the theme song of 2016 for me.

However, even HOME wasn’t enough to clinch the top spot on this year’s best C-pop songs list. Coming out on top was Khalil Fong and Wang Leehom with the most exhilarating collaboration that I have seen in a long time-on the East-meets-West single ‘FLOW’. Given how passionate I am about bridging the gap between Eastern and Western music and cultures, it comes as no surprise to anyone that I’m a huge fan of both Leehom and Khalil. As two of the most outspoken C-pop artists and activists for East-West musical genres, both are infinitely talented, well-educated, bilingual artists whose contributions to Asian-American representation must not go unmentioned. Starting out with spitfire riffs on the electric guitar and synthesiser beats while mixing in elements of Chinese traditional music such as the Guzheng, the song is a five-minute masterpiece that blends all genres into an immiscible mixture. The absence of a single genre to pinpoint the song’s direction is a throwback to Khalil’s belief that music is fluid and without labels, and with such an intensely catchy melody, this song will have you on your feet clapping and stomping no matter what part of the world you’re from. FLOW is the true embodiment of both Fong and Wang’s philosophies towards Eastern and Western music, showing that music is universal, while crushing preconceived stereotypes about C-pop and combining forces to bring the genre to a wider, more international audience. With these two at the helm, C-pop actually has a chance at success, I can just feel it.

So that’s it for my list! Do you have any songs or recommendations you would like to share? Leave them in the comments below, I’d love to know!