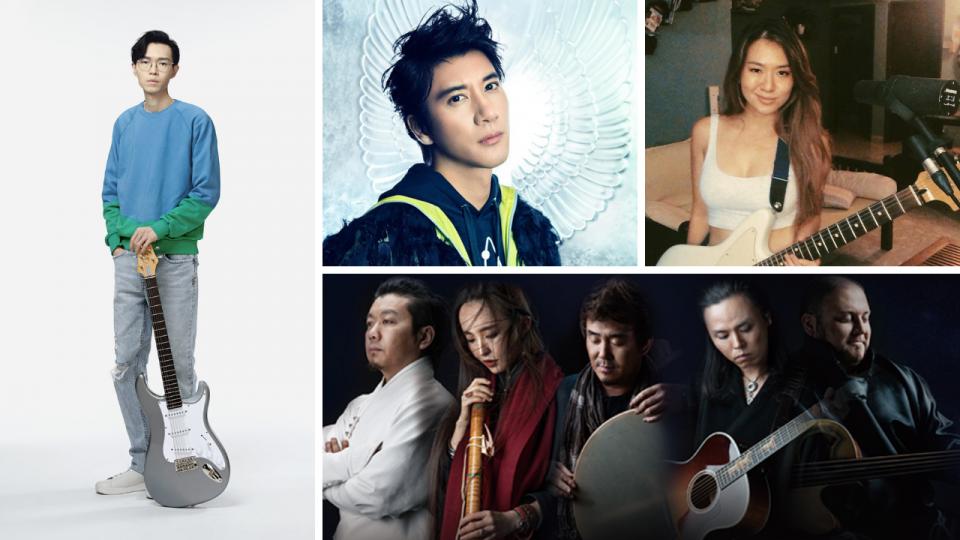 When we started conceptualising #APWEARTHEMERGENCY, one of the biggest topics we had to digest was how we could make the connection between Asian music and environmentalism. Whilst we had previously done one-off pieces, this time I wanted to write a piece that was impactful, yet relatable for wider audiences. One that showed the unique ways in which Asian artists discuss environmentalism in their music.

I wanted to show that while Asian artists may not always present environmental themes in exactly the same way as Western artists (such as through protests or large campaigns); their efforts nevertheless have a marked impact on the region’s awareness of sustainability through their continuous investment of time and creative energy into such topics.

Environmentalism is by no means a race to the finish line, and these artists know that. Some have spent all of their lives being inspired by nature and sustainable living, or for some reason felt a kinship with the planet that we live on. But no matter how these artists have been inspired, they’ve all come to the same conclusion: that more needs to be done to protect our planet.

We asked one of our spotlight artists, singer-songwriter Khalil Fong 方大同 what his hopes are for the sustainable movement in 2021. Here was his message to our readers:

“My hope is that everyone can take a moment to gain awareness on the diverse aspects and causes of climate change. Adapting a new life style and new habits on a macro level will be necessary in order to facilitate real change for the environment. I highly recommend David Attenborough: A Life On Our Planet as a starter.”

So without further ado, read on and be inspired by Hong Kong’s Khalil Fong, Taiwan’s Wang Leehom, Mongolia’s HAYA Band and Singapore’s inch chua, four artists who champion the intersection between environmentalism, music and social change in their respective spaces. Happy Earth Month!

Born in Hawaii and raised between Shanghai and Hong Kong, Soul and R&B artist Khalil Fong is a global citizen through and through. Initially known for his dedication to introducing soul, blues and R&B music to the Mandopop scene, Fong has never shied away from voicing his opinions about our role as global citizens, often promoting peace and love through his East-meets-West productions. From 2011’s ‘Gotta Make A Change’ which urges listeners to enact change, to 2016’s ‘Listen’ which waxes lyrical on the power of sound, to 2020’s ‘TWIOCAMIC’ which directly addresses the climate crisis amongst other world issues, Fong’s commitment to raising awareness about the climate crisis has only deepened in recent years. On top of his creations which often address nature as a great source of inspiration and comfort, Fong also created a children’s book series called Emi and the Dream Catcher which seeks to educate the next generation about important issues. The third book in the series, ‘Tree of Life‘ and accompanying single are a direct message urging younger audiences and their parents to think about our relationship with nature, and how we directly impact the environment around us.

Singaporean singer-songwriter, entrepreneur and environmentalist inch (otherwise known as Inch Chua) seems to have led many different lives in the time that most others have figured out how to live one. Starting her journey as a budding musician in Los Angeles who created a small following with her YouTube creations, she came back to Singapore and revitalised the local indie scene with her weird but wonderful folk/electronic creations and her work behind-the-scenes as co-founder of Invasion Singapore. Initially influenced by her auntie who was an avid environmentalist, Chua has always incorporated sustainability into her lifestyle, but this came to the fore especially on her 2015 EP ‘Letters to Ubin’ which was recorded on the island of Pulau Ubin and creatively represented simplicity of life on the island. Thereafter, Chua was selected to embark on a trip to Antarctica in 2018 which inspired her award-winning binaural anti-musical titled ‘Til The End Of The World, We’ll Meet In No Man’s Land‘. Named one of the 2041 Foundation’s ClimateForce Ambassadors in 2020, inch has continued to champion her beliefs in a plethora of ways, most recently co-founding agape nature, a company that formulates natural home products inspired by the strength of female environmental pioneers.

One of the earliest and most high-profile advocates for environmentalism in the Greater China region, Mandopop king Wang Leehom not only brings Chinese pop music to the outside world – he brings awareness about sustainability and our environment to fans across Asia too. Even as early as the late ’90s Wang was already making clear statements about the climate crisis, through his 1996 collaborative album ‘Nature 大地的窗口‘ which paid tribute to primatologist Jane Goodall‘s first trip to Taiwan. Creating his own style of ‘chinked-out’ music in the early 2000s to de-stigmatise the racial slur, the Taiwanese-American often brings picturesque scenes of nature into his music (as is common in Chinese poetry); therefore inextricably intermingling his passion for social and environmental change. A prime example is his record-breaking 2005 album ‘Heroes of the Earth‘ which incorporated Chinese Peking Opera and kunqu genres into hip hop while spreading messages of peace and love. On Wang’s 2007 album ‘Change Me‘, environmental issues were a central theme as the artist went all out to make a statement about the urgency of climate change through sustainable album packaging and his lyrical content. Even today, Leehom continues to be vocal about environmental issues and using his clout for change, investing in plant-based meat brand Beyond Meat alongside high-profile investors such as James Cameron and Mary McCartney.

For some artists, an affinity with nature comes as naturally as the air we breathe. Mongolian band HAYA is one such artist. Known for their unique fusions of Mongolian ethnic folk and contemporary music, many of their works are inspired by themes of home and spirituality. Their breath-taking performances and lilting melodies have allowed them to bring Mongolian culture to the rest of China and all across the world as an indomitable world music act. While acting as environmental ambassador for the Hulunbuir International Nomadic Music Festival in 2016, lead vocalist Daiqing Tana spoke on the concept of sustainability and how it intermingles with their art and culture: “There is no word for ‘sustainability’ in our language. Because being alive in itself is sustainable, natural, awe-inspiring, respectful, loving, finite. We live and grow for the heaven and the earth”. Have a listen to any track within their vast repertoire and feel their unique connection with the earth for yourselves.

This article is part of our 2021 ‘APW Earth Emergency’ series discussing the contemporary intersection between environmentalism and Asian music. We are partnering with #TOGETHERBAND, a nonprofit global movement to solidify our commitment to concrete environmental efforts. We’ll be holding a contest giving away four #TOGETHERBANDS (sustainably produced friendship bands) over on our Patreon in the month of April, and donating double the month’s earnings to their #TOGETHERFUND. The fund directs aid towards programmes advancing the UN’s sustainable development goals and fighting the COVID-19 pandemic. Read the other articles in our ‘Earth Emergency’ series here, and learn how you can participate in the campaign here.