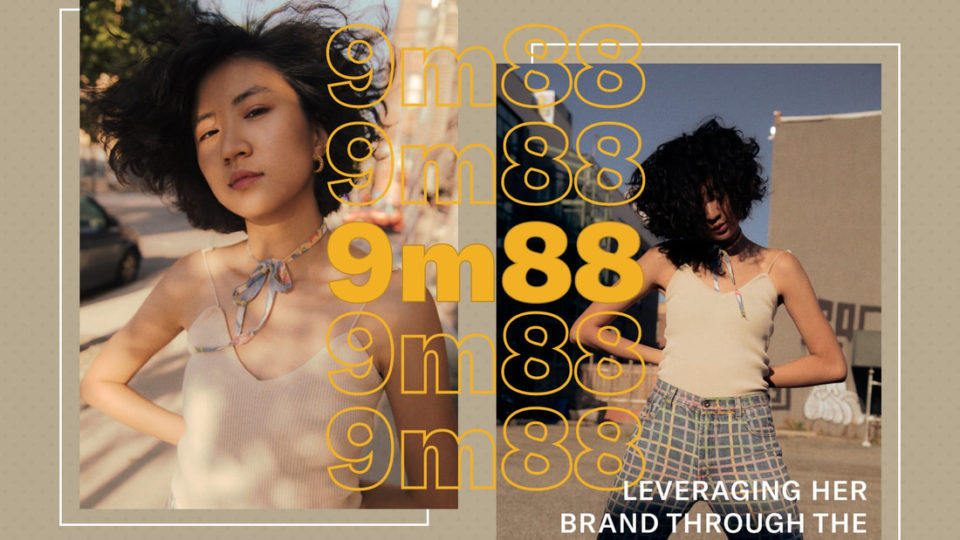 With an unmistakable perm and effortlessly jazzy vocals, 9m88 has been both a breath of fresh air and a dark horse on the Mandarin music scene ever since her ever-growing presence and laidback sound was featured on rapper Leo Wang’s song ‘Weekends With You’ in 2016. Note the use of the word ‘feature’ rather than ‘debut’ – for all the success that the fashion and musically-forward artist has garnered over the years (performing at Clockenflap; collaborating with contemporary greats such as Sodagreen’s Wu Qing Feng, OZI, Ma Nien-Hsien; appearing on Marie Claire, Vogue, the list goes on…) the singer-songwriter has yet to debut with a full body of work.

Seeing all the hints being dropped on her social medias though, we feel that a great deal of long-awaited original work might be coming our way very soon! Yet before it does, we wanted to unpack the phenomenon of 9m88 and her ascent to visibility through the tactic of collaboration.

A background in collaboration
Artist-to-artist collaboration is an often-used method to raise awareness and to cross-promote ones’ music to new audiences. In some cases, it can be a very organic and suitable match of resources to create something innovative; and on the other end of the spectrum, it could also be a commercial marketing strategy. Most times, it’s a little bit of both. Yet such tactics are increasingly overused and ineffective in cross-pollinating audiences especially in a saturated market such as Taiwan’s Mandopop scene.

The collaboration that marked the very beginning of 9m88’s visibility on the Mandarin music scene; in hindsight Leo Wang turned out to be the perfect artist to collaborate with for the then-unknown baba. A rapper known for being genre-fluid and with quirky credibility that didn’t extend exclusively to lovers of the hip hop scene; Wang was perfectly complementary to the budding baba’s jazzy tone and the retro, lazy, humorous vibe of the track. Whilst the success of the cult hit was probably unexpected, it certainly didn’t hurt that baba’s brand was perfectly represented even from the first point of impact. Permed hair, jazzy ad libs and vintage styling; baba fit right in with Leo’s vibe in this track whilst preserving her own inimitable flavour, creating a synergistic impact which quickly made her the indie scene’s new ‘it’ girl.

Working with prominent music YouTuber Outlander on the official version of his original song ‘SWAG午覺’ (the demo version previously featured Crowd Lu), 9m88 again skilfully crossed boundaries whilst pleasing hip-hop fans who may have known her through her previous collaboration with Leo Wang. Choosing to collaborate on a project which already had guaranteed virality (Lu’s version to date has 500K views) and with Outlander, one of few creatives who has skilfully married his roles both as an influencer and an artist, this collaboration was a safe bet that paid off handsomely.

Following on from the ‘lazy’ theme promulgated in ‘Weekends With You’, here baba sings nonsensically about afternoon naps against a set of carefully curated humorous-yet-creative visuals; continuing her narrative whilst again whipping out her unmistakable ‘fro, jazzy, witheringly humorous vocals and fashion-forward appearance. With 4 million views and counting, this song broadened once again wider audiences’ knowledge of 9m88 and made concrete her trademark branding; both visual and musical.

Although the general vibe of ‘Everybody Woohoo’ didn’t seem to have as much of 9m88’s flavour as previous collaborations, her feature on Sodagreen frontman Wu Qing Feng’s first-ever solo single certainly turned heads and made people take notice of the retro-looking lady with the disco ball earrings. This collaboration marked baba’s first with someone of A-listing calibre, and opened doors for her to be noticed by various traditional gatekeepers of the industry; particularly the press. The song’s released also further raised hype and curiosity on what the talented singer-songwriter could do when left to her own devices if a newbie like her is able to hold her own against someone with such immense clout such as Qing Feng.

Featuring on the track of yet another up-and-coming new artist is a bold move, but 9m88 pulled it off with aplomb and class as always. Collaborating on the debut album of the formidable ØZI, baba seems to have moved on from her safe zone and embraced the increasingly different genres she’s featured on; finding different ways of infusing her scent into her partnerships.

This time coming back with her signature vintage look and jazzy ad libs, baba compromises on lyrical content, keeping it more in line with ØZI’s ‘night in the club’ vibe, but piles on the flavour with an extended scatting interlude where she and ØZI riff-off, ending the song on a resounding note. Expanding her melodic repertoire, in ‘B.O.’ Baba also moves beyond just featuring on rigid hooks or choruses; teasing audiences with a new rap-singing style and incorporating her vibe and vocals more fluidly and haphazardly throughout the track. Just what audiences need to find themselves caught hook, line and sinker!

If there’s anyone who’s able to comfortably bring a 90’s TV star into the new era, it would be 9m88. And that’s exactly what she did for Taiwanese veteran actor and singer Ma Nien-Hsien/Mars Ma, collaborating on a Valentines’ day track ‘Walking Towards Me’ with him and signalling his comeback after some years of hiatus from the music scene.

The most full-on collaboration Baba has embarked on since the beginning of her journey, the song had equal vocal parts for both artists, teasing 9m88 fans once more with increasing airtime whilst providing a more well-rounded look at the jazz darling’s sound-verses, choruses, ad libs and all. With a music video set in a retro movie theatre and baba’s awkward vintage dance moves coming out in full force, one could argue that this single was tailored as much for baba as it was for Ma. And if it wasn’t the production team’s intention…well it happened anyway. Three million views and counting, after three years audiences interest in 9m88 doesn’t seem to have waned one bit – and just in time for her impending new releases too.

​Whilst it is often unheard of for artists with seemingly limited repertoire and experience to be awarded with such opportunities, 9m88 has bucked all the trends to become one of the most highly anticipated and influential new artists of the last decade. She’s not young and nubile, yet she’s become a staple at Chanel and other high-fashion events the world over. She’s fully independent and doesn’t religiously follow any known promotional route to promote her music (making the rounds on TV, radio, press outlets); yet any music video that features her has millions of hits on YouTube. 9m88’s success over the last three years is not just an independent event. Instead, it marks new ground in various areas.

Firstly, by completely renouncing outdated promotional methods and finding engaged audiences and success despite it; secondly, by upturning ideal beauty standards and promulgating positive, strong representations of women in an industry much devoid of it; and lastly, proving that creativity, quality and innovation still can (and should) play a very important part of every artist’s strategy. A creative powerhouse in so many respects, baba’s presence on the scene is a total game changer. A master of collaboration and even more so a master of vivid storytelling, I can’t wait to see how she decides to continue telling her narrative in her upcoming works.

Check out our previous interview with 9m88 here and be sure to follow her on her Instagram and YouTube for more updates. And don’t forget to check out her latest single ‘Just Do It For Love‘ available on all platforms now!