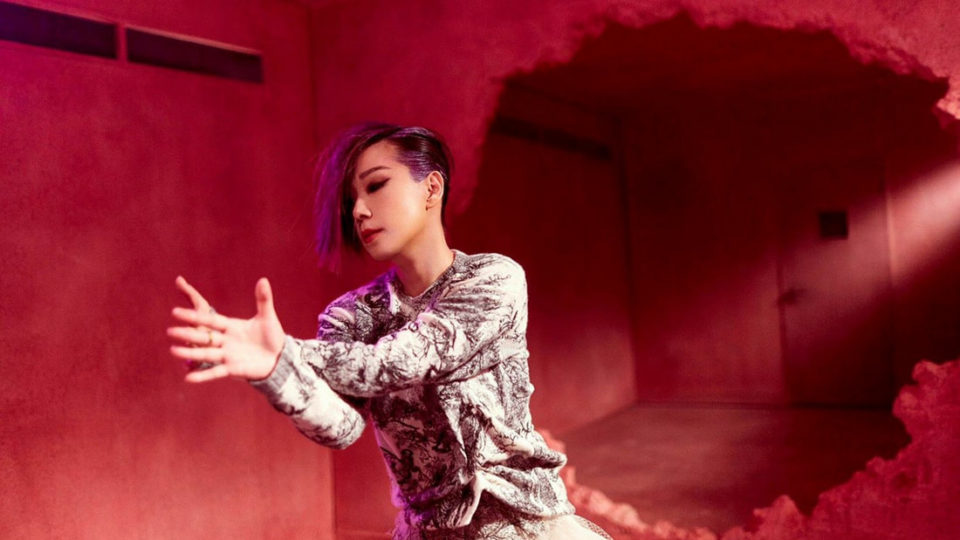 When it comes to defining who is the Queen of Mandopop or Queen of Cantopop, debates can be heated as fans fight for their favourite to wear the prestigious crown. There are very few who have  credible claim to these revered titles, and one of that small handful is Sandy Lam林憶蓮. Since her debut Cantonese album in 1985, Sandy has gone on to be a defining figure in Chinese-language music. What has always set her apart from her peers is not just her incredible commercial success; but her ability to transform, and willingness to step outside of the frameworks of the genre and industries in which she operates.

With the news that Sandy plans to bow out of the music world, now seems the appropriate time for us to take a look back at her astonishing career, and at how she’s shaped and influenced the worlds of Cantonese & Mandarin music. How did a teenage part-time DJ become one of the most prolific Chinese-language artists of the 20th and 21st centuries?

Whilst surprising, Sandy was in fact not a breakout success. Her first two albums and corresponding imagery were heavily influenced by the Japanese idol craze. Yet despite the popularity of this style in Hong Kong, Sandy failed to strike a chord with the general public. It wasn’t until her fourth album that she truly piqued the interest of locals by introducing Eurodance to a Hong Kong audience on Grey 灰色 (1987), and evidenced her ability to transcend genres on the jazz-influenced Ready (1988).
​
At this make-or-break stage of her career, it was the City Rhythm 都市觸覺 series that really launched her into the big leagues, where she has remained ever since. A trilogy of records released between 1988 and 1990, City Rhythm gave Hong Kongers a taste of her true musical and conceptual capabilities, going platinum in the process. Serving as Executive Producer, the albums were filled with glossy dance-pop bops and ballads originally recorded by Western artists.  The records were much more than this though: City Rhythm was the first successful execution of a concept record in Cantopop. Lyrically daring, the series was profoundly feminist; representing the female experience of life and love on the busy Hong Kong streets, and embodied a woman who refused to compromise her aims and desires, with each song taking on a specific aspect of life.

The song selection was also interesting: where Anita Mui梅艷芳 covered songs by the likes of Sheena Easten, and Sally Yeh葉蒨文recorded hits by Madonna, Sandy went after the songs of new artists such as Martika and Taylor Dayne, positioning her as a fresh and youthful alternative. Through this series, Sandy was not only able to encapsulate the glitz & glamour of 1980s Hong Kong and golden-era Cantopop, but also embody its youthfulness and ambition. A collection of corresponding remix records solidified her as Hong Kong’s dancing queen.
​
If it was this series that catapulted Sandy into superstardom, it was coming-of-age album Wildflower野花 (1991) that solidified her as an indispensable character of Cantopop. With wildflowers being a metaphorical representation of the mental journey of a modern East Asian woman, Wildflower was a stunning collection of contemporary east-meets-west music. Marrying traditional themes and western jazz influences, Wildflower not only made people truly recognise the versatility and artistic talent of Sandy, but initiated the ‘Unplugged’ craze of early 90s Cantonese music – the creation of authentic and raw musical products that connected with the listener more intimately.

Although reception was at first lukewarm, it was eventually recognised as a pioneering work in the Cantonese musical canon, and is now rightly regarded as one of the most important and culturally defining albums of Cantopop.

Simultaneously, Sandy was establishing herself as a formidable force in Taiwan and the world of Mandopop. Her debut Mandarin language album, Home Again Without You (1990), was not only a huge commercial success selling over 600,000 copies in Taiwan alone, but was seen as a watershed moment in Cantopop: the success prompted many Hong Kong musicians to test the waters of Mandopop, ushering in the start of Taiwan’s regional dominance in pop music.
​
Whilst her first two Mandarin albums were essentially cover records of earlier Cantopop escapades, it was Love, Sandy (1995) that was a game-changer. A ten-track collection of power ballads, love songs and R&B-inspired pop, the album was a commercial blockbuster selling 800,000 copies in Taiwan and over 3 million across Asia, cementing her in new markets including Singapore and China.  Almost every song became a hit record, with many becoming KTV standards. To date it remains one of the best-selling albums in Mandopop history.

Such staggering success clearly caused Sandy to consider where her resources were best spent. Upon release of 14th Cantopop album Feeling Perfect感覺完美 (1996) Sandy refused to return to Hong Kong to promote the record. This disconnect with the industry, coupled with the sun-setting on the golden era of Cantopop, meant that it would be almost ten years until her next and final original Cantonese album: True Colour本色. Sandy’s decision was not one she made alone: the mid 1990’s is often noted as the start of Cantopop’s declining years, spurred on by the opening of larger Mandarin-speaking markets and the spread of file-sharing and digital piracy (coupled with the economic impact of the Asian Financial Crisis on Hong Kong).
​
Sandy continued to release a steady stream of Mandarin albums into the mid-00’s, honing her capabilities and continuing to push herself creatively, making her a staple of the Mandopop scene in Taiwan and beyond. Works during this time included Clang Rose鏗鏘玫瑰 (1999), critically praised for being avant-garde yet commercially viable, and Sandy Lam’s林憶蓮’S (2000) which  included mega-hit At Least I Still Have You至少還有你. From a lyrical perspective, Sandy took on a greater song-writing role for the first time on Truly… Sandy原來…林憶蓮 (2001), where she co-wrote almost half the album.

Following the Breathe Me呼吸 (2006) album, it would be over six years until we heard from Sandy again on record. Using this time to tour, Sandy also considered next steps for her music. Despite immense popularity, the femme fatale has never been one to let trends lead her music; rather, she follows her own creative ideas and inspirations. Whilst this may at times have fallen into the realms of what was popular at the time, it was not an intentional effort.
​
From 2009, Sandy slowly began working on an album that she wanted to be different from anything she had done previously. Feeling that she had fallen into a vicious circle of releasing music she considered bland and safe and being too reliant on other producers and songwriters, Sandy wanted to make a fundamental change to the way she made music.

Saying that she felt like a new artist after such a long period of absence, in 2012 Sandy released Gaia蓋亞. Titled after the Goddess of earth in Greek mythology, Gaia was a concept record which saw Sandy take on the guise of mother-nature herself, and saw Sandy lament at what humans have done to the world. Filled with themes of nature, life and faith, the record was boldly experimental and a world away from previous releases, aligning her more with Tori Amos/Bjork than the pop icons she was compared to previously.
​
The risk of releasing such a potentially polarising record was ultimately worthwhile: Gaia was praised not only as a triumphant comeback, but held up as a landmark album in Mandopop. Lauded by critics as a forward-thinking and ground-breaking record, she was awarded several Golden Melody awards in 2013, including the coveted Best Album Award.

Sandy continued to challenge herself in other avenues, for example in 2017 she was a surprise entrant in Chinese televised singing competition Singer (spoiler alert – she won), which introduced her as a pop icon to a whole new generation of Mandopop fans.
​
She even returned to Cantopop briefly, harking back to her early days by releasing two albums of cover songs from 1980s Hong Kong (Re:Workz in 2014 and In Search of Lost Time 陪著我走 in 2016 respectively), giving the tracks a new lease of life by adapting the songs to different styles and genres.

After over thirty years in the industry, it’s perhaps no surprise that retirement has crossed Sandy’s mind. Having cemented herself as a piece of living history in both Cantopop and Mandopop, the increasingly intermittent album releases, coupled with her not being shy about how much she wants to travel the world and improve her cooking skills has made it clear that Sandy feels that now may be the time to bow out with grace.
​
In what may very well be the swan song of Sandy Lam, 0 was released at the end of 2018. Three years in the making, 0 continued Sandy’s path of challenging herself musically. A deeply emotional yet analytical affair, 0 is a record that tries to understand and explain the many concepts of zero, including the idea of beginnings and endings. Whilst 0 may be a more subdued affair than Gaia, the record was anything but conservative.

Sandy Lam has never been one for complacency. Throughout her 33 year career, she has cemented herself as one of the most revered and universally loved figures in Chinese-language music; not by following trends or being fixated on growing her career, but instead by focusing on making music that makes her artistically content and – most of all – happy. From dancing diva to mother earth, if this truly is our time to say good-bye to Sandy Lam, then we must thank her: not only for her contributions to music, but for being one of the key forces and defining figures of Mandopop and Cantopop in their most exciting years.