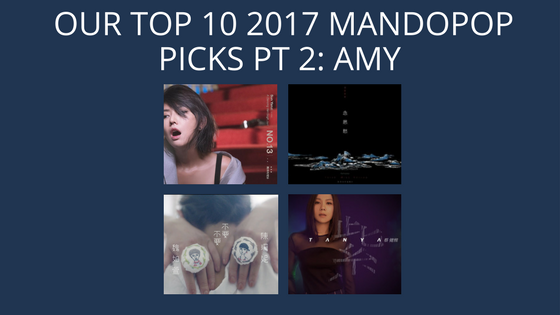 Joining me for the second part of the ‘Top 10 2017 Mandopop Picks’ blog series is none other than founder and editor of YAM Magazine, Amy who has graciously decided to share her picks and annotations with everyone. I would say Amy’s taste in music is really different to mine, but our mutual love for cross cultural collaboration means that we always respect and appreciate each other’s musical preferences! If you’re into indie Mainland Chinese stuff, or music that is a little more dark and mysterious than what you’d usually find in Mainstream pop, I think you’d appreciate Amy’s picks…a lot.

There’s a Spotify playlist at the end of the article where I compiled the songs I could find on the service, and if you’re interested in more of Amy’s recommendations, do check out her latest article over on YAM MAG where she compiled a whopping 50-song list of her favourite songs of 2017, including music from all around the world!

I don’t know much about Joanne Tseng’s career, but I do have the habit of clicking on clicking random videos that show up on my feeds, which is the reason I stumbled upon Guess, which could resemble Stefanie Sun’s edgier music style, though presented in a much more mainstream love ballad.

Mainland band ZhaoZe (who are also on Bandcamp) were also featured on Xiami’s compilation alongside Fang Shi’er and 1229 with this amazing rock instrumental.

Yoga Lin’s voice, generally, makes me sad. LOL. In The Ship, it manages to do so even without the lyrics; and despite the pop rock chorus that crank up the mood.

Otherwise known as Heo Chul, Mainland singer Xu Zhe’s music style differs from most people’s in this list as he’s less influenced by electronic music, and is much more inclined to folk rock, making his track a lot more contemplative, sorrowful and, perhaps, hopeful.

归，不归 is, technically a 2016 song released by Fang Shi’er as a solo. However, this version with 1229 was featured on this year’s Xiami compilation 寻找未曝光少年.

Talk about random music finds— did any of you know that Tanya Chua would be singing one of the songs (if not the main song) for this year’s Wu Kong 悟空传, because I had no idea. 紫, played during an emotional scene in the movie, caught me off-guard and I wondered who the singer was because the voice seemed familiar, and the emotional payback was incredible.

For the last couple of years that I’ve been actively following Stefanie Sun’s career, since I began listening to Chinese music and discovered the incredible The Kingdom of Fools 愚人的國度 six years ago, I had been in awe of her lead singles.

Just like Fools in 2011 and Kepler 克卜勒 in 2014, her latest lead single A Dancing Van Gogh left me speechless at the music artistry displayed. I find it surprising to learn that people don’t take too much to this side of Sun’s music, because that -to me- is the core of her greatness.

不要不要, definitely the highlight in Sandee Chan’s Martial God Cardea 戰神卡爾迪亞, hooks you with a simple melody and electronic bits, alongside those infectious “不要不要” Waa vocals.

Mainland singer Ding Wei made her much anticipated return to music, 13 years after the release of Dear Ding Wei 亲爱的丁薇. Retaining some of her classical music influence, which was heavily featured in her previous albums, Ding Wei veers into a much more electronic direction that also features heavy trip-hop beats.

Chen Weilun’s Think Miss Sorrow 念思愁 is (so far) my favorite album this year. Musically speaking it’s an alternative rock song with trip hop elements, using the poem Moon Hook 月如钩 by Li Yu 李煜, last emperor of the Tang dynasty.
The song has a certain theatricality, beginning with the mysterious introduction and working up to the first big build-up that leads to the first break, taking us back to the beginning of the poem once again; ending in an extremely dramatic tone, which leads to the next song in the album. It’s super cool.

LISTEN ON SPOTIFY (AND FOLLOW US FOR MORE PLAYLISTS!)