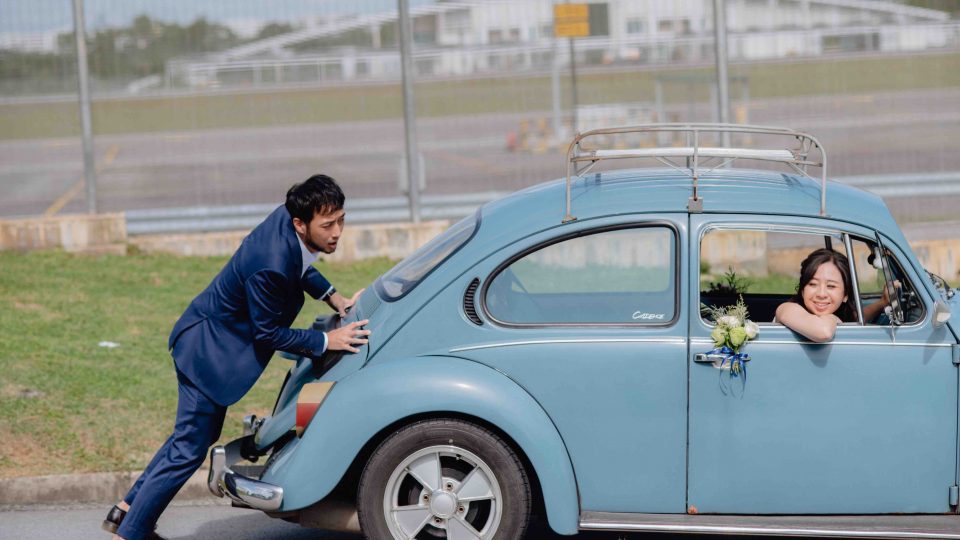 Otherwise known as Meiting, OHMYMEITING’s chill, sweet style of R&B/pop has a earworm quality that one can’t quite put their finger on, whereas post-rock unit Goose headed by frontman Angus has often been driven by a more melancholic, angsty sound.

But yet, as previous collaborations such as “行星戀” show, Meiting’s quirkiness offers a refreshing compromise to Goose’s grunginess, creating a uniquely sweet middle ground that we can only imagine to be one representation of their relationship both in front and behind the scenes.

Recently tying the knot, we thought it prime opportunity to grill the happy couple on this new stage in their lives, their respective new singles (‘獨立 Independence’ for Meiting and ‘Huckleberry Finn’ for Goose), on making space for each other, and of course how their shared passion for music fits into all of this.

Congrats guys! 2020 has been a big year for both of you music-wise. What was it that made you decide to tie the knot?

Goose: THANK YOU! We both agreed that a big wedding wasn’t something we’re looking for and this was the golden opportunity. COVID has inconvenienced us in so many ways, this is our way of making it pay back.

Meiting: I’ve known that he was the right one since a while ago, and given the situation in 2020, it was just the right time to hold a small, intimate wedding for our closest friends and family.

You guys took very different approaches to the dual singles you’ve released December 20th. Can you both share what your singles are about and the perspective its coming from?

Goose: Huckleberry Finn is a fictional character from one of Mark Twain’s novel ‘The adventures of Huckleberry Finn.’ He is a free spirited boy who enjoys carefree sails on his raft. His guardians try to assimilate him into a more socially accepted lifestyle but he would often break track. Some of my friends once made a comment that in some ways, I do resemble Huck – In how I cherish my lifestyle of freedom with no commitments, and my laissez faire attitude. So now that I am married, I guess I have to bid Huckleberry Finn goodbye.

Meiting: My new single “Independent” is actually about my own experience with Angus. I always thought about myself as an independent woman who didn’t need to depend on anybody for anything, but our relationship made me realise that it’s actually nice to have a constant source of support. “Independent” is just a happy, fun song with the feeling of being in love.

What inspired each of your songs? Was it a particular moment within your relationship?

Goose: My original intention was to name it ‘Huckleberry Finn’ to describe how I crave living for the next adventure. The song has a part that says ‘Who will be willing to accept someone who lives his life searching for directionless adventures?’ ‘这无限自由旅程中，没有尽头谁能接受？’ And since Mei Ting accepted me, I now bid Huckleberry finn Goodbye!

Meiting: I think it was at a period where I wanted to hang out with him all the time. I enjoyed myself so much in his company that I just didn’t want us to be apart. I was the clingy one at that point in time HAHA. And so I wrote this song to express how an independent woman like me fell prey to the wonders of love.

I think both of your singles still revolve around the topic of independence a lot. What does independence mean to you, both in your music and in your lives? Has the definition of it changed over time?

Goose: Music wise, independence to me means that I have the creative freedom to write and produce music the way I want to, at the pace that i want, and I’m not swayed by the demands from any source. Overtime, I feel that the term also needs to encompass that independent of the ‘outcome’ of how your song is being received (how well it’s doing on streaming platforms etc), that you will still preserve your own creativity and identity.

As a person, I think independence is being in a place that is rested to know that while you might be on your own, you can still achieve and be capable of great stuff.

Meiting: As an independent artiste, independence in my music just means I’m my own saikang warrior. I pretty much take care of most stuff – I am my own producer, finding my own arrangers and engineers to come together to create the final product in my head. I am my own A&R team, setting my own artistic direction and deciding how best to market my product. I am the composer and lyricist, and also my own sponsor HAHA. For the longest time ever, I have known independence to be a big part of me, and I’m actually proud to have come this far without a label.

Applying that experience in my own life, I’m actually someone who doesn’t like to ask for help. Sometimes, I’d very much prefer to do it all on my own just so I can be in control of whatever it is I’m doing. I saw that as independence once, but I’ve also learnt that I can’t possibly do everything on my own, and so now I’m still learning how to let go and let someone else hold the reins for what they’re good at. I’ve learnt to ask for a second (and a fresh) opinion, and to ask for help when I need it. I try to think of independence now in a team setting, and see it as me doing my job so I don’t hold the rest of the team back.

This is definitely a new chapter for you both. What do you hope for each other as you embark on this new journey together?

Goose: We made a promise to each other that regardless of how busy we are with married life that we will continue to produce good music. And that the biggest favour we could do for each other and for ourselves is to continue pursuing that passion, and not lose ourselves to marriage. So I would always be Mei Ting’s biggest fan in supporting her music. And I will also try to brainwash her to include some post rock elements in her music haha..

Meiting: On this new journey, I hope that we will be there for each other in good times and bad, and that he will find a strong pillar of support in me. I am an independent woman after all. I hope that whatever happens in the future, we will never be pressured by societal norms to stop doing what we love, and that we will always find a way to make it work. Also, I hope to go for a honeymoon soon. COVID-19, please go away.

Does this mean we’ll see more collaborations from both of you in the future?

Goose: Yes and No! Yes because our music is largely about our stories and journeys. Living together would mean we contribute to each other a wealth of content and material to document. That itself is already a collaboration i think! No, because we also need to give each other our own space to grow as an individual and as a songwriter. And in that space, I am excited to see Mei Ting reach the next summit from a far, which to me is the best seat in the house to watch her shine.

Meiting: I certainly hope so! Our output styles are starkly different but our tastes in listening to music surprisingly gel pretty well, so I’m looking forward to creating something new with him. We also complement each other in terms of working style – he pushes me to work harder (I’m lazy), and I’m OCD about a lot of things, which helps to tie down the details.