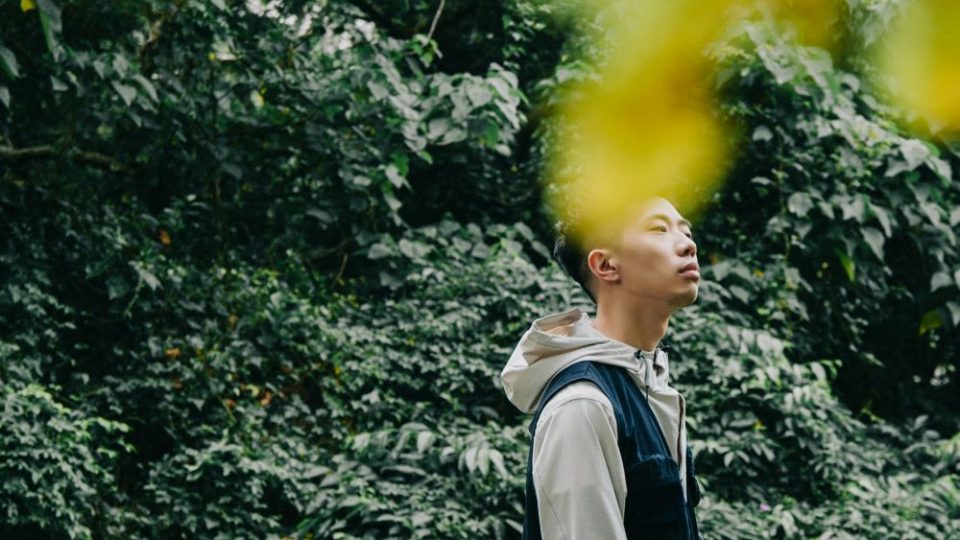 Singer-songwriter Xing Zheng 鄭興 won a legion of fans with the unique guitar-led sound of his debut album back in 2017. After taking a long hiatus, the sensitive balladeer is finally back with his fervently-awaited follow up album, collecting moments from everyday life curated into an aural museum. We got together to talk about the process of curation, the museum metaphor and the process of being inspired.

Q: You’ve just released your new album,‘Museum of Tears眼淚博物館‘, after a three year hiatus. Can you tell us a bit about the album? Why the name?

A: It took about two and half years, from the end of 2017 to around the middle of 2019, to finish the album. After graduating from Chengchi University [Taiwan] in 2017, I finally had a chance to spend quality time with my family and myself. This period of seclusion made me think a lot about the different elements that make up our lives; and then from sorting through all my old things and rearranging my furniture, I started to reflect on the concept of “space”. I wrote the track ‘Museum of Tears眼淚博物館‘ back in the spring of 2018. The inspiration for the song came from wanting to use music to express that feeling of wanting to cry because you aren’t able to fully vocalise your emotions. Soon after that I wrote ‘Danshari戀物癖‘ and ‘Too Loud a Solitude過於喧囂的孤獨 ‘. From there I had my basic outline for the rest of the album and eventually decided to call it ‘Museum of Tears眼淚博物館‘.

Q: Where is your favourite museum? Can you tell us about it?

A: I like the Van Gogh museum in Amsterdam, which houses lots of famous works like ‘Sunflowers’ and ‘Wheatfield with Crows‘. When I attended the Setouchi Triennale art festival last year [held in Japan], I was also really impressed by the Teshima Art Museum.

Q: Your track ‘Too Loud a Solitude過於喧囂的孤獨‘ tells a really beautiful story about learning to be alone. Can you tell us more about your inspiration behind the song and the music video?

A: ‘Too Loud a Solitude’ is the name of a novel written by Czech author Hrabal. It tells the story of Hanta, an old man who has worked as a paper crusher in a recycling factory for thirty five years. Even though the basement he works in is dark and damp; crammed with old books and newspapers, for him it is a paradise of imagination: it’s this intensity of emotion which makes the novel so moving. I’ve never lived in a basement, so I was trying to imagine what it would be like. But there is a big difference between the intricacies and isolation of everyday life and the limitless dreams of complete solidarity – it’s this difference which creates an abstract sense of space. For the music video itself we brought in a Japanese director, Yuta Sekiyama. He wrote the script and coordinated the filming, which really brought those themes of travelling and loneliness described in the song to a new level – we really love it!

Q: You recently released a track with HUSH, what was it like to work with him?

A: The track ‘Rover on the Balcony陽台‘ was a breakthrough for me in terms of musical style, as I don’t usually go for such an upbeat sound. To be honest, I hadn’t planned to collaborate with other singers, but when we were recording this song, I found it really hard to get down the tone and mood that the director was looking for. So at the last minute I decided to look for someone to collaborate on the track with me. I’m so thankful to HUSH for coming on board – he was really involved, from working out the harmonies at the beginning to the recording itself which went really smoothly – his voice has this rich tone which really suited the feel of the song. Working with him on the track also meant I was able to try out some new vocal styles which I’d never done before.

Q: Can we expect any more collaborations in the album?

A: There’s another track on the album, ‘A Roll of Film海鷗‘, which features a collaborator, Misi Ke 柯泯薰; she also produced the track. It was one of the first songs we finished and I knew early on that I wanted to ask Keke to help out on the demo. She has a really soulful voice and I knew it would work really well with this track. Her voice and the acoustic guitar brought a really unique feel to the song, so I’m really pleased with how it turned out.

Q: What would you say, if anything, is different about this album compared to your last album?

A: First, in terms of composition, for my last album I was writing while on the road, so the songs are all about that feeling of passing through all these different cities. This time around, I wasn’t travelling while writing, so my focus turned inwards to more personal issues. In practical terms, this time I have a whole team behind me, from my company, to our producers. We all worked together to create this album, so of course to some extent I have had to step back a bit. When I was just working by myself before, I was really clear about what I wanted the album to look like. But working with a team is different – first I throw out some ideas, everyone works on them together and throws them back to me, we work on it again etc etc. All these back and forths allowed me to see how my team understood and saw me through each of their own perspectives. So this ‘stepping back’ was not necessarily a bad thing, because this way I got to see my album from so many different angles that I couldn’t before.

Q: Your last album was about your journey from Yanzhou to Beijing to Taipei. If you could go anywhere (post-Covid(!)) where would you go and why?

A: I want to go to Jakarta, Indonesia. Since it’s built on low-level ground which is now sinking, it might be impossible to see in future.

Q: Your songs are often closely related to everyday life, where do you get your inspiration from?

A: To be honest [my inspiration] really does come from everyday life; if I see something and it sparks a thought, I’ll jot it down. Often reading books or watching films also gets me thinking. But I don’t believe that inspiration just comes out of the blue, you really have to live authentically and keep being curious about life. Inspiration comes from that process of reflecting on what you read and hear.

Q: You have previously described yourself as an “urban folk singer-in-training”. How would you describe your sound?

A: I described myself [as an urban folk singer-in-training] in the past because the theme of my album matched with my idea of urban folk. Nowadays I wouldn’t call my sound ‘urban-folk’, since after all I have already started to step outside of that genre. But I’m happy to call myself a ‘singer-in-training’, since there’s still so much to learn – hopefully I can get better and better.

Q: What is next for you?

A: First of all I’ll be promoting this album and getting ready for the live performances. Once performances are possible again, we’ll set a time to perform the album for everyone.