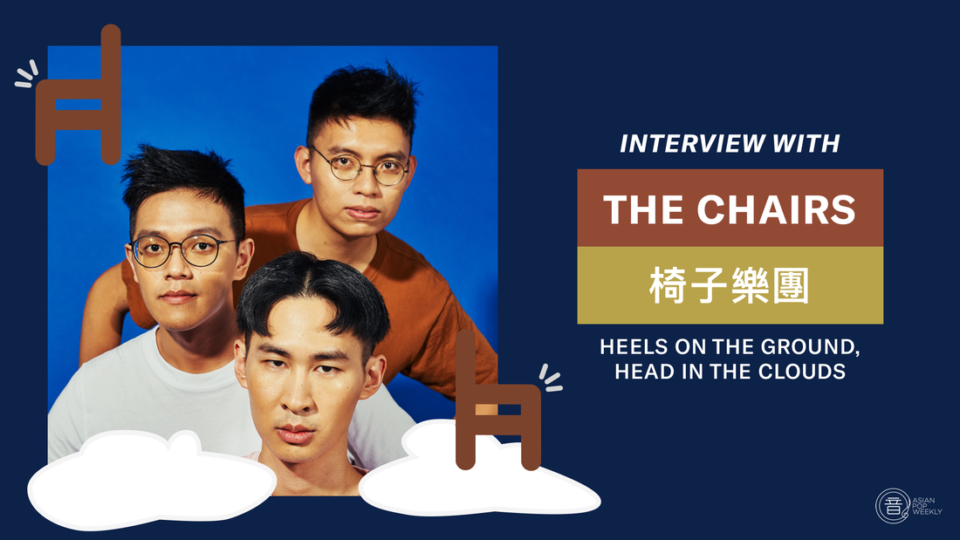 Q&A with The Chairs 椅子樂團 – Heels on the Ground, Head in the Clouds

1.Firstly, congratulations on winning ‘Best Vocal Group’ at the 30th Golden Melody Awards! When you first knew about being nominated, did you have any hopes for winning at the awards?

Of course we are so thankful for the judges’ affirmations, this is our first Golden Melody Awards experience, everyone was very much looking forward to it. However we didn’t have too much expectations towards winning, we felt that being nominated was already a big achievement and affirmation in itself!

2.Overseas audiences are perhaps not as familiar with your works. Could you share with us a little about each of your band members, and why you started this band to begin with?

Our members are Yong Jing (Lead Vocals, Guitarist), Zhong Ying (Lead Vocals, Guitarist), and Ban Sen/Bo Yuan (Bassist). We started playing together since we were in Guitar club in high school, and this year is our tenth year as a band. In university we named ourselves Chair Band and started releasing works under that name until we released our first album in 2015. This was a big musical milestone for us.

3. Why do you call yourselves ‘Chairs Band’?
‘Chairs’ is a pretty random band name, at first we just knew how to play guitar, we didn’t have any concept of arranging and would knock on chairs to think up rhythms for our songs.

4. Your last album ‘Lovely Sunday’ was very critically acclaimed. Not only was the album very diverse in terms of genres, but was also diverse in terms of the languages used (Mandarin Chinese, Taiwanese, English, Japanese). Why did you want to use these languages to present this album? Do you have any plans to expand overseas in the future?
Most of the songs are written by the two lead vocalists Yong Jing and Zhong Ying. Yong Jing’s musical nutrients come mostly from Western music, so our earliest songs were all sung in English, it was only until after our first album that we began trying writing in other languages. Zhong Ying speaks with his family in the Taiwanese dialect, so writing in Mandarin Chinese and Taiwanese is something that comes naturally. As for ‘日常的鏡頭 Normal Lenses’, the Japanese lyrics are written by Boyuan, he really likes Japanese culture, we felt that putting this personality into our album would be quite meaningful.

As creators, we definitely hope that we can have chances to share our works with even more people; in the future we’re also looking forward to holding performances in even more places we haven’t been to before.

5. Your sound is light and vibrant, can you share a little about your musical inspirations? Which musicians have particularly influenced your works?
Yong Jing: My favourite band has always been The Beatles, I look very much towards their stories and works; I feel that living in the 60s seems like quite a wonderful thing. As for the music that inspires me there’s too much, at every time period it’s different. Starting with the “Lovely Sunday’ album, during that time my favourites were Lou Reed, David Bowie, Mazzy Stars from the 90s; whereas at the moment I’m into bedroom and indie pop.

Zhong Ying: When I was younger I listened to a lot of Mandarin pop, until I started learning guitar. At that point I started to be influenced by The Eagles, The Beatles, Scorpions, Mr. Big and other classic rock bands and western songs. But I think the person who inspires me the most is perhaps Jason Mraz; his stuff is interesting but also very warm. A bit later on in my journey Mac DeMarco’s ‘Salad Days’ also opened another window of opportunity for me.

6. I feel that your jumping off point is a bit different from other bands. What kind of things inspire your songs?
At every point our nutrients are different, and the things that we want to present are also wildly different. As for the first album it was more acoustic based, discussing earthy emotions and intimacy, friendship, and observations and records of daily life. But from ‘Lovely Sunday’ onwards, we bravely broke the mold and put more ideas into our music; from classic inspirations, we began to play around with different permutations of instruments and effects. In terms of the content it became even more freewheeling. As we grow older, we have more thoughts about the world around us, and have discovered the singularity of simple narratives. As such, we began to find more meaning from books, movies and visuals as well as other materials; so you can hear the sound of film being exposed in ‘Normal Lenses’, and in ‘Slow Down’ you hear the sounds of a road trip across the Americas…Even in terms of the sparks of love and memories of pets, these are all written into our music like a dreamy adventure.

7. A few weeks ago you released yet another new EP called ‘Lemonade’. Can you tell us a bit about the concept behind the album? What’s different between this album and your previous one?
Humans can only use what they already know to think about the future, we are often unclear about what is real; just like the feeling of waking up at dawn. No matter what the world looks like, at every moment it is inviting us to taste a mouthful of sweetness and sourness wrung from time. We can embrace it together on this dreamy journey and float amongst it. “Lemonade” extends the tone of “Lovely Sunday”, but has more of a philosophical spin, and uses more human vocals and modulation effects. We’re excited for everyone to have a taste.

8. Can you all share what your favourite song on the EP is? Why would you particularly recommend that song?
Zhong Ying: Actually it’s a little hard to pick one from the three, every song attracts me In different ways, and represents different emotions and feelings. But I really recommend for listeners who are in a serene space such as before going to sleep or reading books; this is a great time to repeat the song “Levitation”.

Yong Jing: I think that Zhong Ying’s backing vocals in “Dreaming With You” is amazing, everyone needs to take a listen.

Bo Yuan: The intro of “Lemonade” is very powerful, as if you’ve fallen headfirst into a jug of Lemonade. What comes next is a gentle, soft melody that allows you to float amongst it. Actually all the songs in the EP are really great, we hope everyone can try it together.


9. The last album was a big milestone for you. After winning a Golden Melody Award, what’s next on the cards for you guys?
Again we are very grateful for the judges’ affirmations, we’ve received so much from the Golden Melody Awards and treasure every bit of it. As for what’s next, we will be recording our new album, and are in the process of preparing another Asia tour, we hope to bring Chair Band’s music to even more places we haven’t been before, please stay tuned.

After over ten years in the music scene, The Chairs is a band who has learned to perfect the art of staying down-to-earth in their daily routines whilst letting their minds freely wonder when it comes to their music. With their heels firmly on the ground and their heads up amongst the clouds, their music is a perfect combination of lucid dreamscapes and slice-of-life stories that rejig your perspectives and assist listeners to see the world around them in a new light. Things aren’t always as they seem, but Chairs seems to always find the bright side of very situation, in ways that you could only dream.

Chairs’ latest EP ‘Lemonade‘ is already out on all major streaming platforms. Be sure to check it out, and follow them on their socials too.