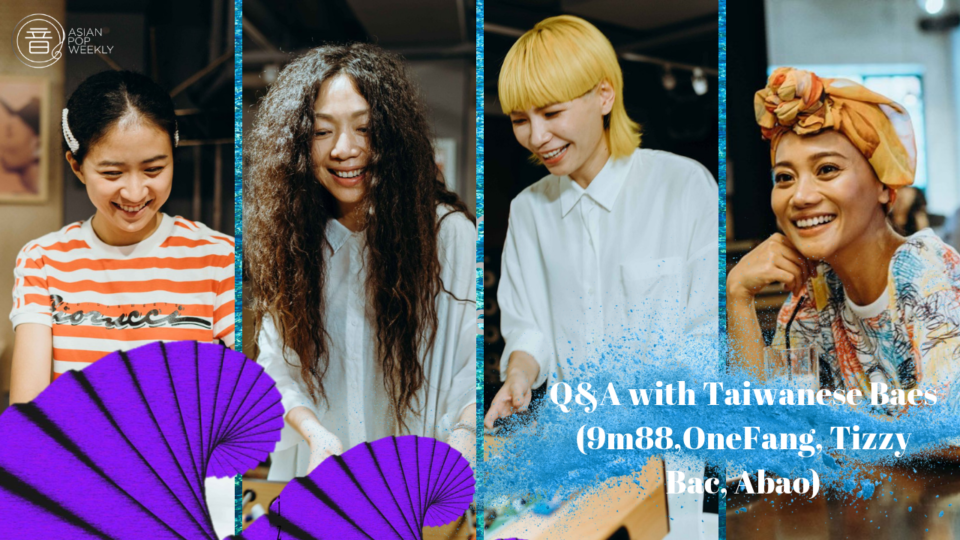 As the inaugural Taiwanese Waves showcase at New York City’s Summerstage draws close for the fourth year, this year’s line-up is spectacularly and regally feminine in nature. Nicknamed ‘Taiwanese Baes’, the event has chosen to feature some of the most unique and empowering female artists the scene has to offer, including unique up-and-comer 9m88 and Aboriginal powerhouse Abao, as well as pioneers in the indie rock and pop scenes respectively; Tizzy Bac and OneFang (Wanfang).

All with their own stories to tell, the four acts come together in the city that never sleeps to bring a diverse audience a new sense of what it means to be a female artist who is part of the Taiwanese music scene in this day and age. Read on to hear more about their thoughts on New York City, and what to expect from this years’ festivities.

9m88: A really big, smelly, and culture dimensional city that a lot of fun things happen.

Wan-Fang: My impression of New York is that many people go to New York to find his or her true-self, searching for dreams and search for who they really are. When we throw ourselves in New York, it’s like we are nothing so that we can feel the true-self and the most original stage of ourselves. By seeing people from around the world, I think it’s a process that you can understand some things.

2: How many times have you been to New York? What are you looking forward to do in New York?
Hui-Ting (Tizzy Bac): This is my first time going to New York. I will go to MOMA and the Metropolitan Museum of Art first, and then the next thing is to go to “Sleep No More“.

9m88: I’ve been to New York a lot. It’s a bit nervous for me to come back to New York because it’s my first time coming back ever since I left at the end of last year. I feel a bit of resistant. Don’t know how my feelings will be, but I have a lot of good friends that I miss in New York, really looking forward to seeing them.

Wan-Fang: I haven’t counted how many times. I will stay a few days longer, but I’m not sure what I will do, I want to see what is happening in this city. I want to see what would happen if I just throw myself in New York. No special plans to do anything.

ABAO: This is my first time going to New York. I want to go find some elements that is related to Soul music, go see some performance and street dancing parties.

3: If you compare yourself as ‘waves’, what kind of waves do you think you are?
Hui-Ting (Tizzy Bac): Old waves, I hope I won’t die on the beach. (Old waves means forerunner, as the old saying “As in the Yangtze River the waves behind drive on those before, and those before die on the sandy beach.” )

Wan-Fang: I don’t think of myself as waves; I think I’m more like lake water. The waves that are more relatable to me is more like lake water reflections, there can be outside factors that cause the ripple or water waves, a small waves or a big jump’s splash of water, but the lake itself can be very deep or even undercurrent.

4: Is there anything special you want to deliver to the New York audiences？
Hui-Ting (Tizzy Bac): I hope this performance will show everyone the different dimensional of Taiwanese bands.

9m88: I hope you all can come to Taiwanese Waves to listen to music from Taiwan.

WanFang: This is my first time performing in New York. Since I’ve been active for over 30 years, it’s hard for me to choose the songs for this performance. Some audiences might listen to Wan-Fang from the 90s, some audiences might listen to my songs after 2015, so it’s hard for me to choose. But I think if the theme of this year is about female empowerment, I think I can bring my view as a female to New York, and by my music to show New York the look of the female of Taiwan.

ABAO:  Last year’s performance by Sangpuy is traditional music of aboriginal. This time I want everyone to listen to Taiwanese aboriginal language and how the music is like mixing with modern music.

5: Since the topic this year is ‘Taiwanese Bae’, we want you to share with us what is your ‘bae’?
Hui-Ting (Tizzy Bac): My cat, I have a cat that’s older than Tizzy Bac, it’s 21 years old, it’s called A-Ban. I used to bring it in my hoodie to go to band practice with me when it was younger.

Wan-Fang: It’s a tough question, can I skip it? (After a long time) I think the content and the way I perform because it’s a view extended from myself.

6: If you want to recommend something that is exclusive in Taiwan to foreign audience, what would you recommend?
Hui-Ting (Tizzy Bac): Items would definitely be bubble milk tea, things would be the temple cultures in Taiwan, such as Mazu Pilgrimage activity.

9m88: I would recommend everyone to go walk around in Longshan Temple, take a look at everyone’s different stages of life.

Wan-Fang: I think Taiwan’s folk belief is fascinating because the people’s personality that is formed by folk belief is a very interesting modest. Taiwan is a tiny dot on the earth, but a lot of exciting things happen in this small dot, such as legalizing gay marriage earlier this year, or beliefs that formed up from history, there are some religious people that everyone can attribute to, like TzuChi, started from Taiwan and to the world. When 911 happened there were only some groups that can go on site, one is the International Committee of the Red Cross, and the other one is TzuChi. I think this is something very interesting, a female monk with the willingness of “For Buddhism, for all beings,” inspiring the whole world after 50 years.

ABAO: I have been interviewing different country’s indigenous recently, I realize they all really love bubble milk tea, so this is a recommendation from the bottom of my heart.
​
If you’re in the area, be sure to check out Taiwanese Waves 2019 and the Taiwanese Baes. The showcase will be held on the 3rd of August at Rumsey Playfield, Central Park NYC. Doors open at 5pm, the show goes from 6pm – 10pm. Find out more on their Facebook page HERE. All Q&A material and photos provided courtesy of Taiwanese Waves.