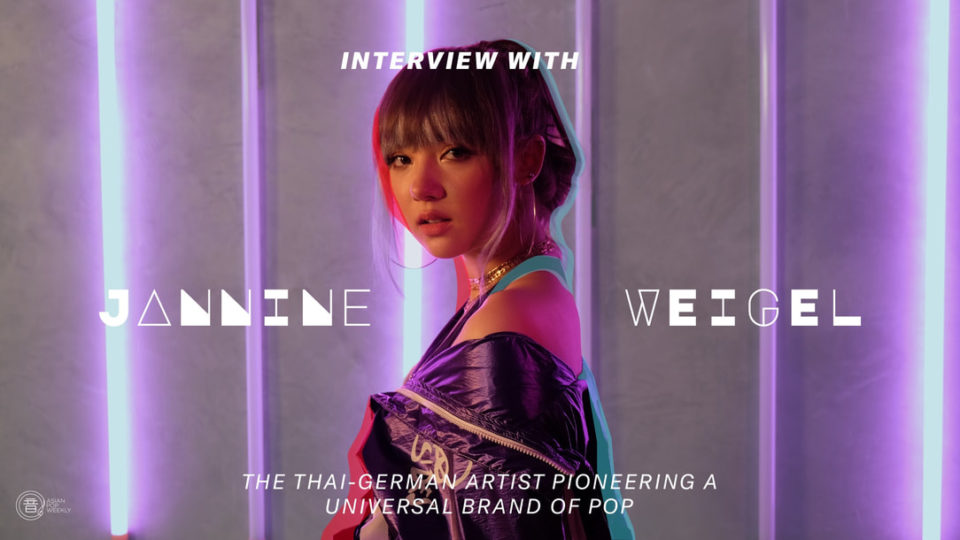 Young, vivacious and ready to take on the world, 18 year-old Jannine Weigel’s already-long list of accomplishments makes us feel old just by listing them. Not only does the Thai-German artist sing, dance and act; the fact that she transitions smoothly between performing in her familial tongues as well as English puts us very much to shame. Not to mention the fact that she’s acted in various television series’ and commercials since she was in her tweens. It’s clear that for Weigel, performance is in her blood.

Amassing a mind-boggling online following through her YouTube covers before moving swiftly on to releasing original, multilingual content that speaks to her heritage and experiences, Jannine’s ascent to visibility is buoyed by her evident passion and enthusiasm for performing and learning. From videos of her guessing the names of Vietnamese artists; to singing covers of American and German artists; to her own multilingual original works, it is clear that this young go-getter is living in a global, tech-friendly society, and very adept to this environment too. We dug deep to find out more about how the bubbly artist’s multicultural background and experiences have influenced her budding philosophy and musical works.

1. You’ve accomplished so much for your young years! Do you have a particular milestone that you’re really proud of?
​Thanks! Something that I’m really proud of until now, I think, is getting signed with Universal Music, because I’ve always wanted to work with Universal Music. And they just contacted me last year. So we kind of just started working together. And it was kind of still, like, … a surprise to me that they contacted me because I feel like Universal Music is such a big company, and that they decided to contact me and wanted to work with me is, like, a really great honor to me. So yeah.

2. Do you have any words of wisdom for other young artists out there?
I think what I would say to the young artists out there is just keep doing what you love. And don’t be afraid to be yourself. Because I think, because of like, all the mainstream music, we try to just fit into … what’s trending right now and all that. But I think if you start to be like other people, you, you lose your identity. And I think your identity in music is very important to be as a successful musician. So I think you should just try to experiment and find your sound and what fits you, what the people like. But at the end, the most important thing is, what you like, and what you think, is your identity and just try to express that through your music. And if you love what you do, then people will also love what you do as well.

3. You are clearly someone very passionate about the arts. How did your interest begin?
​I actually loved music since I could remember. I really love singing since I was very young. My mom always supported me. So, I still remember when I was like four or five years old, I would sing on a table like just like singing karaoke… And yeah, it was, it has always been a dream. But because I was living more in the rural area in Germany, I’ve been living in Germany for 10 years-I was born and raised there- I never really thought of being becoming a professional singer or entertainer because there was really no opportunity there. So when I moved to Thailand, I actually started out with acting, but then I started to just like, try to compete at a singing competition. And that’s how I found my passion and music and all that. So I start(ed) my own YouTube channel. And that’s kind of how it all began, with covers. And then I did my own original songs.

4. You are of Thai-German descent and perform in thai, English and German. How did you learn all these languages and now that you’re based in Thailand, how do you retain your multilingualism?
Um, well, I’ve always well, I grew up in Germany, and I’ve always spoken German to the people around me, like, my aunts and all that, and also my father. And I’ve got friends who are German and all that. But I’ve always spoken Thai with my mom… It’s kind of like a multi-language thing in my family. And I got the English from my parents as well, because they always spoke English together…I spoke Thai with my mom, I spoke German with my dad, and they both spoke English together. Although I didn’t really start using English at the beginning, I always heard English in my household. So after like, I think when I was seven or eight years old, I really started to understand a lot of what they were saying. And yeah, when I moved to Thailand, I just kind of thought, my love for studying languages, and especially English, I would like, watch a lot of YouTube videos and just like study by watching people talk on YouTube, just like vlogs and stuff. And before I was really into gaming, so I would watch that. And just like study from that, like, it would come naturally, I would watch, like videos all day, every day. And that’s how my English really developed… (laughs)

5. Do you have a particular language that you feeling most comfortable performing/writing in?
I guess that would be English, weirdly. Because like, I feel like English is such a universal language that almost everyone understands, to some kind of degree. And I just feel very comfortable singing in it. I think like, you can express yourself so much in English in a way that it’s different from German or in Thai. For example in Thai it’s a tonal language, so you can’t do a lot with melodies and stuff… English like, it doesn’t matter what melody it is, you can just write anything you want. So I feel much more comfortable in performing English (laughs).

6. You released your latest single “Words” a while ago. Can you tell us a little about this song and what it means to you?
Yeah, I wrote the song two years ago in Berlin at a songwriter camp. I co-wrote it with another songwriter. Her name’s Simone Jones. And yeah, at the time, I was facing a lot of, kind of backlash over a cover that I did. At the time, I did a cover and some people didn’t really like it…they didn’t dislike the way that I did the cover, but the way my voice sounded in general, which I can’t change because I was born with this voice… I was trending on number one in Twitter, like, just like people just bashing me telling me that I sounded like a goat or something like that (bursts out laughing). So I kind of got inspiration for the song by that situation. I told my co-writer what happened to me. And yeah, we kind of like help each other write the song. And then I kept the song for about two years, because I didn’t want to rush releasing the song, I just wanted to keep the song and see how it would age. And yeah, after universal music contacted me, I offer it like I just kind of played the song to them. And they really liked it. So we decided to release the song together. And before releasing the song, I wanted to change it a bit…So I add the rapping part which I wrote by myself, I just wanted to rap because I really loved hip hop for a long time. But I never got the chance to really write something or like rap on my own.

7. Not only are you a singer, but also an actor. If you had to choose between the two, which would you pick?
I would definitely choose singing. (laughs sweetly) I mean, I love both, I think both are very different, and also fun to do. But at the end, I love singing the most and doing music.

8. You have an amazing online presence. However, it also goes without saying that you receive some negativity from keyboard warriors. As a young creator, how do you deal with this?
With hate…For me, the hate came very gradually, because I’ve been doing YouTube for a long time, I think around seven years I saw so like, the experience came very slowly. And I started to like adjust to it. So at this point, I’ve experienced a lot of that kind of stuff… I don’t really care that much anymore. Because at the end, it doesn’t really matter what other people say. Because like, they don’t get to choose where you go, like, you control your own life people what people say, can’t affect you unless you let them affect you, you know, so like, they can’t predict or control the future. You’re the only one who can say or like control, where you’re going to go what you’re going to do. So just be happy with what you’re doing. Like, you don’t need to listen to everyone or what everyone’s saying.

9. What does the future hold for you? Any projects you can share?
I’m planning to do an album maybe next year or so. So currently, I’m preparing for that. And also, I’m going back to Germany, to my homeland. And I’m probably going to move to LA like next year or something to study and all that but I’m still going to go back and forth between like America and Europe and also Asia. So I’m still going to work while also studying. So yeah.
​
Pint-sized yet bubbling over with her own unique, sweet inner strength, Weigel is certainly a force to be reckoned with. Her unique upbringing and as a result experiences have allowed her to easily transcend the invisible borders that separate cultures; creating a new breed of music and entertainment that can be appreciated and enjoyed by people all over the world. Her youth is not a handicap; instead a major advantage that means she, unlike artists of past generations are able to be the ones leading new trends, and pioneering a truly universal brand of pop music; seamless and organic in its execution. We guess it’s for good reason Jannine is signed with ‘Universal’ music?