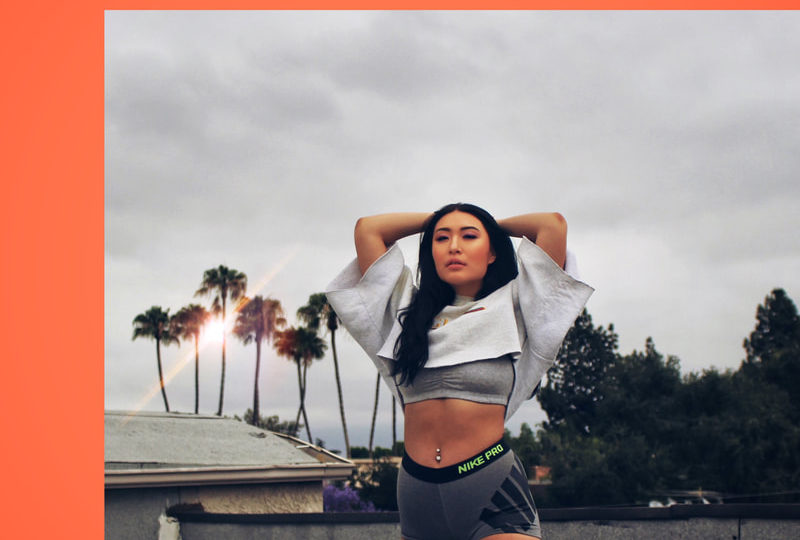 Bold, talented and fiercely passionate about connecting cultures through her music, Sabrina ‘Baer’ Chang is one of few new-gen pop artists who has dedicated her music towards bridging gaps between the East and the West in a unique and personal way. Having spent her childhood experiencing cultures both in Canada and Taiwan, her lack of complete identification with any one of them has spurred her passion for connecting and promoting global harmony.

Intrigued by her personalised unpacking of the ‘East-meets-West’ concept and how she aligns it to the bigger picture both sonically and visually, we HAD to ask her a few burning questions about how she creates and what is it about creating cultural dialogue that drives her creating process.

1. You’ve lived both in Taiwan and in Canada. Why choose to be based in LA?
LA was always an obvious choice for me because it’s the center of the pop music scene that I want to be in. After my years in Boston during my college years, the next step was Los Angeles – to be immersed and integrated amongst the creatives that are shaping the music we hear on Pop radio.

2. You’rea multicultural singer who wishes to connect cultures. Why has this philosophy beensuch a big part of your music?
I think that philosophy has been solidified and strengthened as I have embarked on my own creative and spiritual journey.

Musically, when I first even decided I wanted to pursue music – it was really as simple as that; a burning desire to make a living doing music, whatever it was. As my journey progressed, I realized that the reason I want to make music is because I want to MOVE people with my voice and my art. I want to make people feel the way I did when Kanye dropped 808 and Heartbreaks. Or when Jay Chou dropped November’s Chopin. I was purely swept away with emotion; sometimes I was dripping in subzero coolness, sometimes I felt crazy adrenaline, and other times I would bathe in sadness (and I LOVED it). Music and art influence the attitude and minds of people; and artists become icons and role models that people can look towards.
On a macroscopic level, when you influence a large audience you start to move culture as a whole.

This connects with some of my own spiritual realizations as a human being. As someone who comes from multiple cultures – it can be a struggle to identify with any single one of them completely. I feel like this lack of identification has shaped my own growth from childhood subconsciously, and I realize it now reflecting back. I want my music and my art to be a representation of a connection of unique cultures and be able to move and inspire people to live their own truths.

3. This philosophy was prominently present in your 2017 EP ‘Pink Formosa’. This year, you’ve released several new works and collaborations too. Can you share how they fit into your artistic vision?
With The Pink Formosa, that was a really thematic collection of work that highlighted this philosophy. It was the start of the movement. In the works I’ve released this year, I have been embodying the philosophy in the process of creation and the main focus has been on making even better music than before that will really move people. For example, with “So LA” – we got a great response from people because it was a simple catchy line with lyrics that even people not from the city totally related to. It’s a super cultural song about the ridiculousness of LA. In fact, in the music video, the story was that me, JVZEL and Zach all met at the Pink Paul Smith wall and we had just arrived from our homeland. I was wearing a Taiwanese flag as a cape! The perspective of the song starts from someone who is not from the city to someone who is now a full Los Angeles transplant.

With “All Or Nothing” – I collaborated with my good friends BEAUZ who I know from high school in Taiwan. This song is an Asian influenced EDM bop! It’s got a relatable romantic message with some flutes and Asian-influenced sounds in the instrumentation.

4. Being exposed to Eastern and Western cultures, what are your musical influences like?
They’ve definitely morphed and changed throughout the years. Right now, Rihanna, Kanye, and Drake are my influences as an artist overall. Rihanna is such an icon in every sense – in music, fashion, and beauty. Kanye is such an innovator in the arts, and Drake always delivers with some good pop hits. Those are three things I aspire to achieve as an artist.

Musically, I’ve been listening to a lot of the Charli XCX stuff (mainly her 2 recent mixtapes); I love that electronic fused pushing edge pop. I also think Travis Scott’s new album is super fresh – it’s just a work of art, the way the whole thing is put together.

I haven’t listened to as much new Mandarin music lately, but growing up, I loved Jay Chou, 陳綺貞, 蘇打綠, and 方大同.

5. While ‘East meets West’ often means the strong incorporation of traditional Eastern elements, your music uses a different approach. What does ‘east meets west’ mean to you?
For me, it’s less about the obvious elements, because I actually don’t fully identify with that all the time due to my background. I feel like as a human being, I embody the concept of East meets West – in the ways I think, in my upbringing, and in the ways I view the world. Those all translate and boil down to how I write, how I create, and how I visually represent myself. And that’s also ever-changing and developing as I meet more people and even travel more.

6. Your music is greatly influenced by electronic elements. Do you feel you have a certain affinity with this genre?
For sure. Naturally – with the way I make music and the tools I have access to, I simply don’t have access to that many acoustic instruments and especially a way to record them properly. I would say I definitely like electronic elements that are mixed and mangled with acoustic elements a lot – the combination of the two usually has this cool cutting edge feel to it.

7. As this year comes to a close, can you share your hopes for next year for yourself and for the world?
Next year, I hope to continue to release even better songs globally! Actually, last week my mom told me she heard one of my EDM songs at her gym and I was so shocked. I’m looking forward to being able to make connections with fans globally 🙂

Brought up to define ‘East meets West’ music as the ‘chinked-out’ works of Leehom, or the chill, unintelligible stylings of Jay Chou; it has only been in the past few years that I have begun to discover more artists redefining the term in their own ways. Although few and far between, the work of artists like Baer are fundamental to projecting diverse and innovative representations of music, and therefore people. Be it members of the Asian diaspora, or just anyone who identifies deeply with both Eastern and Western cultures, the essence of these works boil down to an innate desire for fostering cultural dialogues and making this world a better place.

Connect with Baer and join the movement through her Instagram, YouTube or find her music on all big streaming platforms.