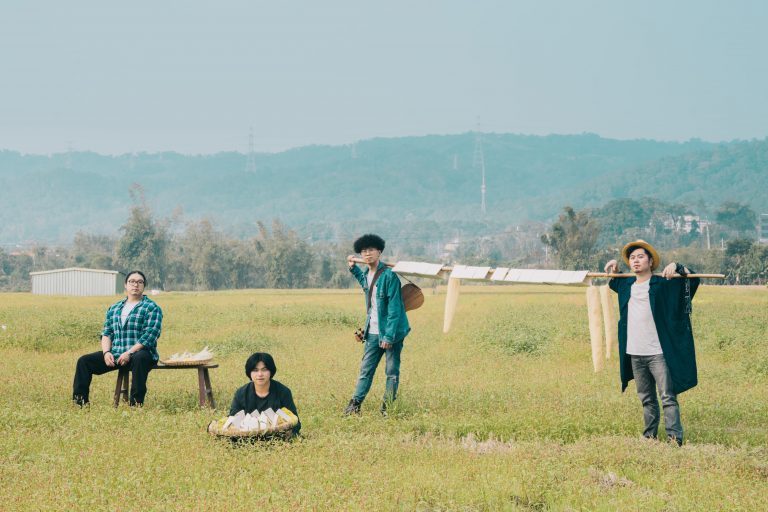 In 2012, acclaimed Hakka singer-songwriter Zixuan Huang 黃子軒 published his first album in his native language, under the title of The Way Back Home 回家的路. He had no idea at that time that this journey back to his roots would be the start of a whole new chapter for him. Furthering his efforts in this area, he founded the critically-acclaimed band Zixuan & Slow Train 黃子軒與山平快, a band of fantastic live performers who raised the bar for Hakka music in Taiwan with two Golden Melody Awards for Best Hakka Album in 2013 (The Way Back Home 回家的路) and 2016 (Stranger 異鄉人).

Following this, Zixuan showed his commitment to​ the local arts scene in Hsinchu by spearheading a succession of projects such as establishing his own studio, setting up a local radio station, as well as widespread cooperation with local artists and schools.

At the end of 2019, Zixuan released his now Golden Melody-nominated third album Going Up To The Country 上鄉 ; a collection of songs that describe his relationship with his hometown Hsinchu. With this album, he hopes to convey that this seven-year journey home is coming to an end; whilst further addressing topics and issues close to his heart.

Paying tribute to Woodstock’s unofficial anthem ”Going up the country”  with its album name, Zixuan realised that the spirit of the record resonates strongly with this legendary song’s themes; namely the urge of getting away from the rat race of the city and heading for a rural area.

Overall, Going Up To The Country 上鄉 looks at how the stereotypes of urban and rural life continuously appear in the media. Facing the cliché that leaving the capital means taking the unavoidable path to a professional decline, Zixuan tried to emphasise through his music that it was actually his decision to settle in Hsinchu that brought him into a new stage of life and inspired him to dig the essential root of Hakka culture – the connection between human and nature. What he wants to sing is not only the specific shape of his hometown, but also the reality of his life in Hsinchu.

By the process of constantly rethinking his relationship with his hometown, Zixuan cleverly combines traditional Hakka music with diverse modern styles to create a sophisticated yet comforting cross-cultural listening experience. This is reflected in Zixuan’s musical influences as he worked on the album.

“During the production period of this album, country music continually came to mind. I approached numerous country musics from legendary artists such as Bob Dylan, Hank Williams…I was really hooked in the genre of old-time music, blue grass… this kind of simple chords, parallel harmony and the straight beat from double bass.”

More interesting is the fact that Zixuan is going above and beyond to incorporate Taiwanese and Western elements into his music while performing it in non-mainstream dialects. Keenly aware of the various perceptions towards Hakka music, he works to update the genre and public views of it in ways few can replicate; rendering his music accessible despite the language barriers.

“Normally people would consider the market of Hakka music mainly focused on the elder, but the reality is, the elder will gradually fall and how will the next generation keep passing down the traditional culture? Instead, I dedicate myself to developing new markets, so the goal is to target the young generation. I prefer to create topics which interest youth. For example, in the songs Hotel and Bottoms Up! 燥忒 consist certain new words which doesn’t exist in traditional Hakka. In the long term, I hope my songs can cross the barrier of language race. It is a very tough and lonely journey, honestly to say. Though I still feel that I am doing a meaningful and cool thing!“

Indeed, Zixuan’s approach to Hakka music is refreshingly different. Something that he has continually reflected on are the ways he can modernise his music for these younger and wider audiences.

“How to create a native-language song that keeps pace with the times?” has always been the subject of self reflection. Looking back at the history of Taiwanese music, there are big gaps between traditional and modern. The historical context and advancement is not like American music, for example Blue-Jazz-Country music-Soul-Rock n Roll- Hip Hop, each genre influenced from the other. However, the native musics in Taiwan for example Hakka, you can’t find the link between traditional Hakka folk songs and the western-influenced music genre. How to connect the big gap of traditional and modern, is the thing I want to put effort on and in the new album I did spend plenty of time to retrospect the music root of Hakka, how the traditional skill of singing relates to the way of living or even geography environment.”

This relates to the bigger picture of how Zixuan perceives himself and his positioning as an artist and creative. Although he performs primarily in Hakka, the astute artist continues to break down barriers and define his music fluidly yet authentically in ‘“Going Up To The Country’.

“Even though people defined me as a Hakka singer songwriter, in the new album I don’t want to limit it…In the new album I cooperate with different culture background musicians,such as Paiwan guitarist Baobu Badulu, Japanese guitarist Ohtake Ken, Indonesian band DJ Theory, Malaysian sape master Mathew Ngau Jau. For my opinion, all these exotic elements consist of the culture of Taiwan. When you talk about Hakka nowadays, you can’t ignore these diverse ethnic cultures.”

An artist with a clear sense of self and a sense of responsibility that extends far beyond, Zixuan opens the door to endless possibilities for cultural exchange and social change on his latest record. From rejuvenating the Hakka music scene to diversifying the landscape of Taiwanese music as a whole, it all starts with going back to ones’ roots. The exploration of Going Up To The Country 上鄉 is not just a vision of going home but also an invitation to you as listeners, to write your own story in this era of rapid and massive replication.

Listen to ‘Going Up To The Country’ below: