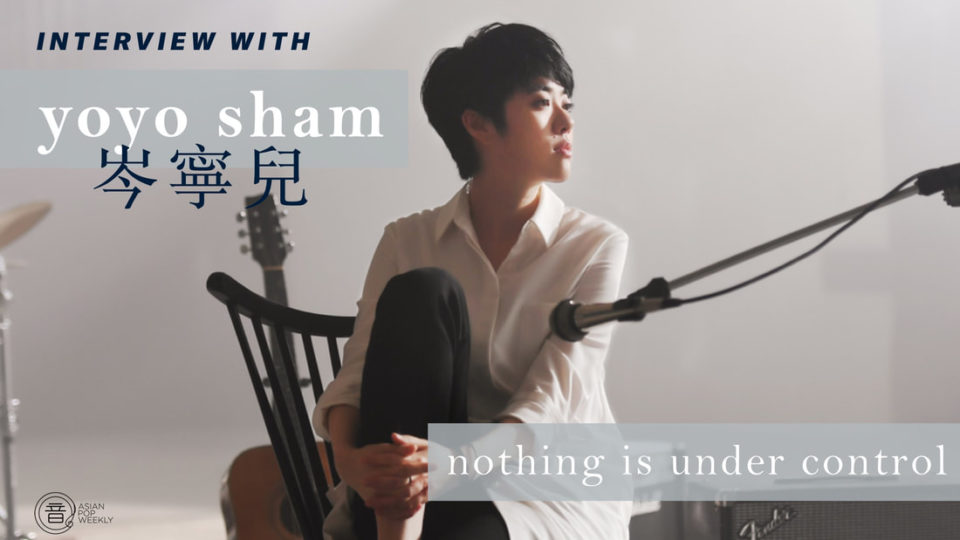 Interview with Yoyo Sham 岑寧兒 – Nothing is Under Control

​Upon interviewing her, we found that Yoyo Sham’s personality is just like her music; mellow, comfortable, and always thoughtful. Although the end of 2018 saw her just releasing her second album, the Jazz/Folk/Pop artist has already made her mark on the Mandarin music industry in more ways than one; boasting a lengthy track record as a professional backing vocalist for the likes of Khalil Fong and Eason Chan, and showing her apparent flair for blending genres and languages into her easy songwriting style.

Yet her latest album ‘Nothing is Under Control’ sees an evolution of Sham’s uniquely chilled sound; sometimes into more lively, cheeky, territory; whilst reprising and improving on her relaxing jazz/folk offerings. Riding the highs and lows of life, Sham takes us on a journey of the unexpected-no matter how we perceive the latter.

‘Ride’; as one of the core songs on Yoyo’s album has a bohemian feel à la Corinne Bailey Rae, and skilfully penned lyrics that delicately capture the vivid beauty of letting the chips fall where they may.

“I’m really happy to have a song like that, I’ve always wanted to have a song like ride that kind of…is kind of comforting, and it’s like a reminder for me, the things that’s said and its positive, I like the vibe of the song, its earthy, keeps going.”

The album also features less optimistic (but equally stunning) pieces, including the dreamy, folksy ‘月亮見 ’; a reflection that relies on Sham’s diverse upbringing and the feeling of isolation that may sometimes bring.

“‘Smoke’ is …more like a night time, self-reflection, nostalgic (piece)… I think of the moon as, you know when there are sleepless nights and you feel like only the moon understands you… And growing up in different cities, being on the road a lot, I feel that the only thing that’s the same seems to be the moon even though it changes everyday…its always there for me at night so I wanted to write about that and there’s nostalgia because I put a little bit of a lullaby that I used to sleep to, my mom used to sing to me. And it’s about floating towards the moon. So I put a little bit of that in there.”

Performing in Cantonese, English and Mandarin; the serene singer has become a bit of a cultural nomad over the years; having been based in Toronto, Beijing, Hong Kong and now Taiwan. To fully and truly express herself; is to create and perform in these three languages.

“I feel comfortable writing in both English and Mandarin, maybe because I’ve had more practice in that. Funny enough, Cantonese is my first language…, but I find it very hard to write Cantonese lyrics because… to work in a song it’s another skill, it’s another monster, there are different tones, relative tones that has to work with the melody for people to understand, to hear it, for lyrics to work… But I love singing in it, it’s the most direct and straightforward for me… so I asked some lyricist friends to write it for me (laughs) …I think that’s the thing, I have to speak in all these languages to fully, most comfortably express myself, that’s why I have all of them in my album.”

On top of her already impressive accomplishments, it was interesting to know that in the earliest stages of her career, there was a spark in her that many saw; including the legendary Jonathan Lee 李宗盛. Although his influence on her doesn’t come through as strongly in her musical style as his other mentees, Yoyo shared that his influence is far from surface-level.

“I would say that his value system had influenced me a lot… its less technical and more of a core belief of song writing and performing. He would value what touches people’s hearts, if that thing is honest and true, and what your responsibilities are as someone who wants to make music… he influenced me in ways that he gave me questions to ask myself for a lifetime (laughs). Questions like are you a performer or are you a music lover, or are you a music maker? I think these are questions that you would have to answer for the rest of your life and you would have different answers at different stages, and I’m really grateful for that and for meeting him right after graduating university at a crucial time when I was looking for mentorship as well…”

Coming to Singapore very soon for her second concert here at the Esplanade, the amiable singer shares that it will be a music-filled event that she hopes will share her growth as an artist since last coming to Singapore six or seven years ago.

“I expect to meet first timers, I would really appreciate those who came to my first show like seven years ago…that would be very sweet, it’s always nice to see people sticking around. I hope they can expect to just have a good time, it will be very focused on music and songs, and I look forward to meeting everyone in the music and being in music, and hopefully those who came six or seven years ago will find growth in my music or in my singing. Can just expect a nice gathering and good music (laughs).”

On top of the big year that Yoyo had, her easygoing attitude has opened many more doors for her, including the phenomenon that was her 2017 song ‘Chasing The Light 追光者’, which went viral after being featured as the theme song for television series ‘Rush To The Dead Summer’. A viral song, a full new album and a couple live shows later, Sham says that 2019 is a year for resting, recuperating and tidying like Marie Kondo.

“I think my resolution is to tidy up my place, and regroup, cos 2018’s been a big release for me, I’ve released the album so musically I think this year I need to recuperate a little bit, maybe take rest at times, but also more concrete resolution I want to find another work space, probably like a studio I can go and write songs regularly, I think that would help me develop like a routine and be more productive. I’ve been thinking about the living and working space recently.”

It’s hard to pinpoint what exactly it is about Sham which appeals to me so much. Not overly sweet, but always lightly quirky; the singer-songwriter places emphasis on comfort in an era where everyone is going for gold. And in this age where everyone is trying desperately to control things that are way out of our grasp, the calm artist seems to be sitting back and enjoying the ride; and I think that’s what I enjoy most about her music. Watching and waiting to see how she uses her unique, global perspectives to make sense of this crazy world we live in.

Sham will be performing at the Singapore Esplanade Annexe Studio on the 23rd of February 2019 at 8pm. Tickets are on sale here, and there will be a meet and greet session after the show.