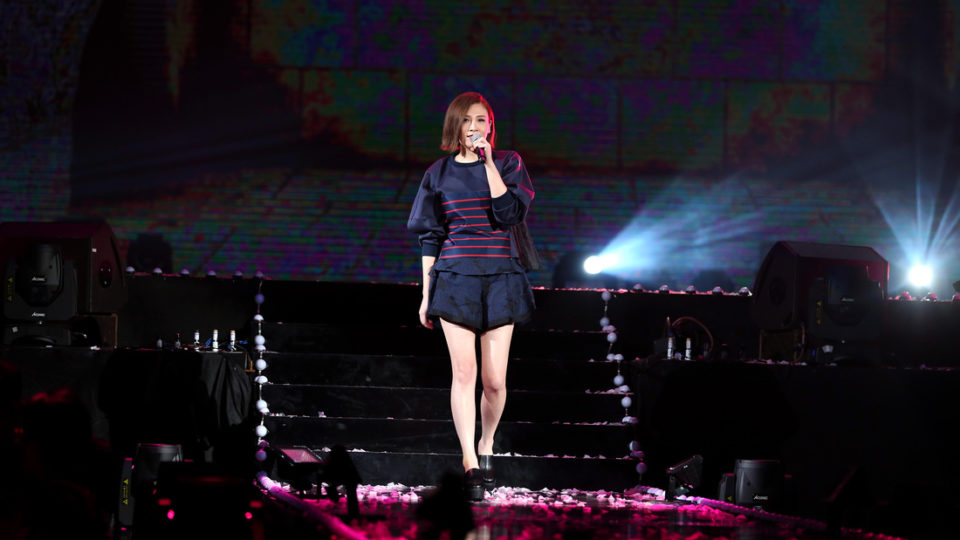 Waa owns a unique and clean set of vocals along with a playful and eclectic personality. Other than being a singer, she is also Taiwanese radio station Hit FM’s DJ. This year she has even released her own book ‘Word Flowers‘, allowing her to be recognised now not only as singer –songwriter and DJ, but also as an author.

We caught Waa at England’s Glastonbury festival where we invited her to tell us more about her ideas and plans regarding her performance at the festival.

Q: Coming to England’s Glastonbury festival to perform this time, did you have any different plans?

There’ll be different arrangements, and the rest is still in discussion. Other than that, I’ve also prepared my wellington boots; they told me if I’m going to indulge myself and to have fun, they know that I will be quite preoccupied with thinking about the Golden Melody Awards (The Golden Melody Awards ceremony is on the same day she returns from the Glastonbury festival). And also, I really am yearning for the feeling of stepping on mud.

Q: How about your outfit for this year’s festival?

This time the clothes are very unique, they are based on the inspiration designer Jenn Lee got from last years’ festival. Previously the clothes she made were all black, but for this range there is instead this feeling of freedom, so I hope that performing while wearing her clothes will also have a feeling of being free from any kind of restraints.

Previously I myself did not dare to wear clothes which had less fabric, but now that I’ve lost a little bit of weight, I want to try to see a different me on stage. And also I think since I’m on an overseas stage there’s no need to feel shy, that outfit I am wearing on stage will reveal the back and the waist.

Q: Will you anticipate being able to spur more inspiration to arise from being in England?

I remember the last time we went to Liverpool music festival, there we were introduced to an Italian band ACA, and then we collaborated and wrote songs that are in my latest album, so I’m looking forward to being able to meet many creative types who are a little different from me, so that I can collaborate with them to create music that is a little different.

Note: Waa Wei performed at the Liverpool music festival in 2011, and afterwards co-wrote the song ‘Water Lilies’ with Italian band ACA which can be found in her ‘We Still Have To Believe In Love You Bastards‘ album.

Q: During your time in Glastonbury, do you have any other plans?

I myself really wish to see DJ Code and My Skin Against Your Skin’s performance. I personally really like My Skin, because onstage they are really wild and crazy, I hope I can also be like them, dancing freely onstage.

And also, actually I do not have high expectations, I just want to sit in the park and that would make me very happy already. Really, being in a different place will give you different ideas and inspiration, and I’ve heard that after going to Glastonbury your eyes truly will be opened to new worlds, so I myself am very excited.

Q: If you had a chance to organise a music festival, how would you design it?

I have two pet cats, I am always at home imagining that they would love to come out with me, previously when I performed at the Taipei Arena I made a hat that looked like my cats and wore it on my head.

If I were to organise a music festival, I hope that there can be one section that is specially for animals. Of course I think this would be a bit difficult, especially due to the speakers as I am afraid their ears would be a little uncomfortable. I just hope that everyone can bring their pets to play together, this is what I most wish to organise.

Q: You are a singer, DJ, theatrical actress and author, is there anything else you would wish to try?

In my heart there are many things I wish to do, but if I can act in a movie I wish to try that. Although I feel that previously while acting in a musical I was a little engrossed, and really was stuck in my role and couldn’t get out of it. So I don’t know if I get the change to act in a movie whether I would also be this absorbed in my role, but if there is a chance I would want to try acting in a movie.

Q: What kind of character would you like to play?

Actually I am willing to try any kind of role, I remember the first time I acted in a movie it was director Chen Hong’s ‘The flowers Ate That Girl’; at that time I acted as a lesbian, Sandrine Pinna (Taiwanese-French actress) and I kissed in front of all the crew and the camera, actually this is already a very big challenge.