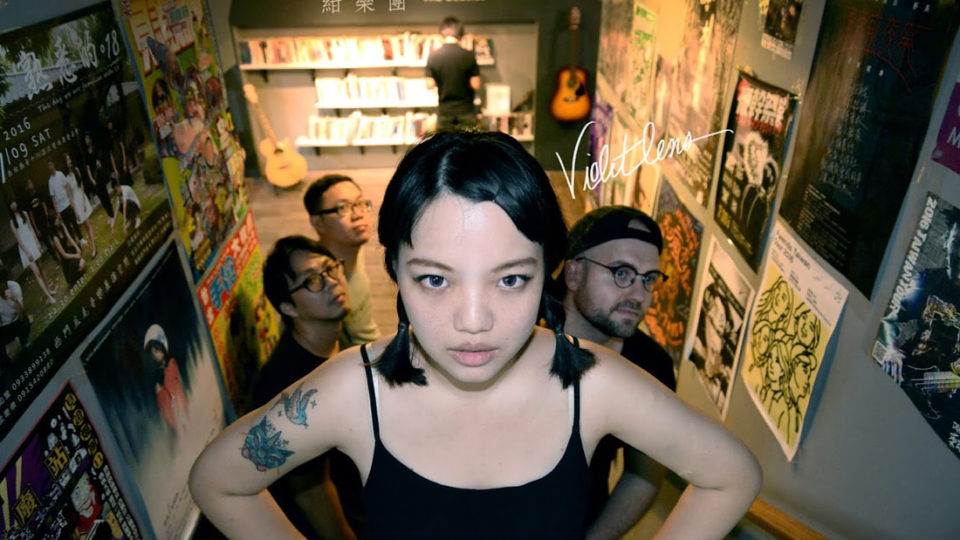 When you think ‘Taiwanese indie music’, those of you in the know might associate the term with kitschy groups dressed in colourful, mismatched outfits, or with distressed bands which always happen to have a female lead singer singing somewhat eerily. But no matter what popped up for you, I doubt ‘East-meets-West music’ was the first thing to spring to mind. A niche theme popularised by the likes of pop stars Wang Leehom, David Tao, Khalil Fong and more, it is surprising to see such influences creep into the underbelly of the Taiwanese music scene.

Nevertheless, that is exactly what Calvin Jordan and Anna Pan set out to do when they started their band Violet Lens in 2015, a five-piece indie/alternative pop/ punk and indie rock outfit that proffers an organic blend of Eastern and Western musical influences while performing in English, Mandarin and sometimes Taiwanese. The band, composed of Calvin (Songwriter, Backup Vocals), Anna (Songwriter, Vocals), Stan (Lead guitar), Howl (Bass, Backup Vocals) and Kulou (Drums) started in a way as Taiwanese and as indie as one could get; through the use of Taiwanese independent music sharing platform Streetvoice. Calvin recalls:

“Violet Lens started when I found a few of Anna’s songs on StreetVoice.com. I immediately felt a connection to her voice, which sounded special even when recorded on a smartphone and paired with a beat-up old guitar. At the time I was living in Taichung, so I reached out to Anna and asked if she was open to collaborating and possibly meeting up in Taipei to play together. She was a bit reserved, but said she was interested. Shortly after that we met up and started sending snippets of song ideas to one another.”

And for both Calvin and Anna, this marked the beginning of a fruitful collaborative process. As for how the band’s name came about, its precipitation was entirely random, but also rather serendipitous. Anna states:

“Early on, when we had already written a few songs together, a few people asked what we were called… Unfortunately nothing jumped out, but as we were going back and forth, Calvin kept looking at his glasses on the table in front of us. The lens had some kind of anti-blue light coating that makes everything a bit purple when looked at from an angle. He said ‘Violet Lens’, and I said something like, ‘I hate purple… but I don’t have any other ideas.’”

​And so the name ‘Violet Lens’ was born; under everyday, albeit quirky circumstances. Yet the name is effortlessly fitting for the band’s moody, slightly grungy sound which brings to mind the colour purple, as well as their overall aim to break boundaries and usher in new perspectives; or lens; through which Chinese music could be viewed from the outside.

The ‘Violet’ aspect of their music comes through especially strongly in their latest album Heavenbird and Goldfish Grass, a low-fi, eclectic selection of thoughtful tracks which were particularly influenced by the pair’s songwriting environment.

“We wrote and recorded all the songs in the Fall/Winter of 2016 in Colorado. It was very cold most of the time, so we spent most nights bundled up or sitting by the fire pit out back. The lack of sunshine definitely affected our writing, to the point that we decided to make an effort to write a few songs that weren’t as dark. We ended up deciding that some of the songs were ‘Winter’ songs and the few that were a bit less dark were the ‘Fall’ songs. To represent the two different moods of the album we chose two flowers that bloom in fall and winter, snapdragons and bird of paradise. We felt like it might be more interesting to use the direct translation of 天堂鳥與金魚草  in English.”

As for the ‘lens’ part of their name, Calvin shares how his experience with listening to music sung in different languages helped to shape this worldview:

“Growing up I was always fascinated by music sung in different languages because it seemed like another lens, aside from genre, to experience music through.”

Coming from different backgrounds and having spent a lot of time shuttling between the East and the West, the topic of bridging cultural gaps appears organically in the duo’s music. While trademark sounds of Eastern culture are often sprinkled liberally in most other offerings of ‘East-to-West’ music in a more ‘in-your-face’ way, the Eastern influence in Violet Lens’ music is more nuanced; yet nevertheless evident. Anna says:

“We went back and forth for a while about whether to release songs only in Chinese, only in English, or mix it up. I think we came to the decision to write in all the languages we use based on the fact that it felt the most natural and representative of who we are. We also felt that if people can feel the emotion through the melody and delivery then it might transcend language.”

Going off the tried and true theory of music being universal, it seems that the pair are optimistic about the adoption of their music by wider audiences. Calvin shares his logic and philosophy on this:

“I think there’s a lot of misunderstanding on both sides of the world about how different everyone is.  Fortunately, art, and music in particular is a great bridge to connect people from all walks of life. Through music it’s a lot easier to appreciate differences and similarities. I know from living in Taiwan for years that there are some amazing singers and bands that anyone could fall in love with. At the same time there are a lot of bands that write in English with lyrics so abstract that very few people glean any meaning from them, and yet they still have hordes of fans. I think if there are listeners like that out there, then there’s definitely people who might be interesting in learning about songs written in Chinese.”

Although currently based in Taiwan, the band do have plans to take their music to Western audiences in the future. However, Anna shares that the task is certainly not an easy one, once again highlighting the importance of the very gap they are working to fill with their music.

“We have a lot of friends and supportive fans here in Taipei that drive us to keep playing and always work on getting better. We would love to play shows in Colorado too, but we feel that by growing in Taipei first it will make it easier to bring our music abroad when the time comes. We actually did try to get some people involved after we finished recording in Colorado, but despite lots of people liking the material, it was difficult to find people who wanted to play music sung in Chinese to English speaking audiences. We’re hoping that will change over time!”

Many who know me are bound to have caught wind of my affinity for anything East-meets-West related, especially given our website’s aim to bridge the gaps between these two poles. Yet in all my years of analyzing and observing pop music that is said to fall into this category, I have never before heard of any artists employing this theme the way Violet Lens has. While many, driven by the politics of race strive to have their heritage proudly and experimentally on display (which to clarify, I LOVE), Violet Lens focuses not necessarily on the hallmarks of traditional Chinese culture to differentiate themselves, but instead on the modern East Asian ‘third culture kid’ experience, using relatable themes such as loneliness and longing for home to paint a unique, yet memorably crafted perspective of the East-meets-West experience.

Violet Lens紺樂團’s latest album “Heavenbird and Goldfish Grass天堂鳥與金魚草 ” is out now on Spotify, Bandcamp, YouTube, iTunes and all major streaming platforms. Find the band on Facebook and show them some love too!