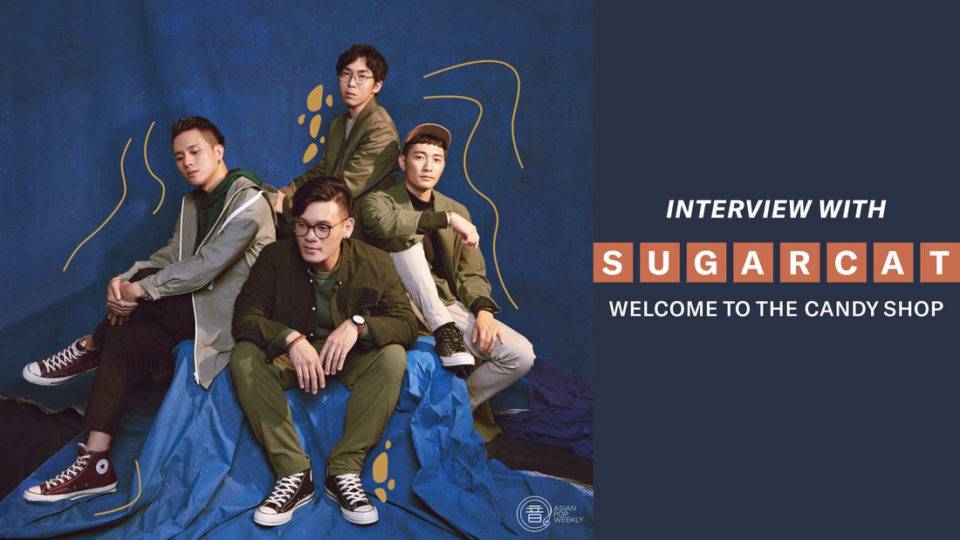 We fell in love with Taiwanese R&B outfit Sugarcat back in 2017, back when they were just a two-person unit composed of A-lan (lead vocalist, guitarist) and Gao Zhen (lead vocalist, drummer). Releasing songs in a familiarly cheerful vein of R&B but with a new twist, the guys were a hit with me, and continued to be as they toyed with different iterations of East-meets-West fusions within their amiable sound across a myriad of singles.

So when their debut self-titled album ‘Sugarcat’ came out earlier this year, seeing the boys debuting this time with a full band, I had to get in on the action and pick their brains. I was particularly curious about what it was which led them to experiment with East-meets-West R&B that felt very much like a revamp of the early works of Jay Chou, David Tao and Khalil Fong; and it seems that our guesses at their musical influences weren’t far off the mark at all.

“We didn’t consciously try to emphasise East-meets-West in our music, especially since this style has been done before (Khalil Fong, David Tao, Jay Chou…), of course we have been deeply influenced by them. I think you could say that since we grew up nurtured by Mandarin music while exploring overseas classics as we grow; through listening discovery and practicing our instruments, this has slowly had a big influence on our musical logic.”

During the interview, I also had the four guys introduce themselves to listeners individually so readers would get an idea of who they were. Yet the playful band took things way too out of context, sharing the most random and ridiculous facts about themselves, showing off their happy-go-lucky spirit while they were at it.

“A-Lan: Hello everyone, I’m Sugarcat’s guitarist, keyboardist, composer, arranger, producer who acts cool and is always late but is also a chill admin person, but my favourite thing to do is dive deep into the world of gaming. PS4 can be mistakenly said instead of Spotify, I’m soon to be the king of esports.

Gao Zhen: Hello, I’m one of the lead singers and drummer Gao Zhen. I’m also the second key writer and composer for the band. I want to go live deep in the mountains by the age of 40 and never see the light of day again, and only use LINE to talk to people.

San Zhi: I’m bassist San Zhi, hi everyone! I’m in charge of the bass and synth bass arrangement and performance, this is the foundation role, not eye-catching but very important! I have a weird eating habit, when I eat pot sticker dumplings I only eat the skin and take out the filling: definitely not someone who tries everything.

Shao Yu: I’m keyboardist Shao Yu. It’s been a while since I’ve played basketball, but I’m still very into 2K games. Also with chives, if it’s not wrapped in a dumpling or some kind of container, I’m not eating it.”

Truly, Sugarcat seems to be a band bursting at the seams with creativity and hilarious hijinks; which also partly explains their dynamic-yet-unique musical style. A little funny, a little sweet; add a big dose of authenticity and Sugarcat’s music is what you’d get. Drummer and second lead vocalist Gao Zhen shared what it is that inspires them to create:

“To me, the moment a song is completed is like marking a milestone on a person’s ‘life experience timeline’. And the things which allowed these songs to be created are the fruits of all of your past life experiences. So one could say that inspiration comes from your daily routine. And because of this, when looking back and seeing or listening to your works, you’ll feel a kind of strangeness or memories welling up to the surface, just like when you see photos of yourself when you were younger.”

Indeed, each of the jovial band’s songs are chock-full of flavour that seems to come from a deeper place than just messing around with some chords and throwing some lyrics on the burner. Like a tasty soup, their songs are a product of lots of patience; bringing to the boil the best, most seasoned and relatable versions of their experiences.

And when asked about their favourite tracks from the album; the fact that each band member came up with different picks is testament to the overall quality and diversity of their debut album. Indeed, there’s truly something for everyone.

“A-Lan: ‘Go’…This song tells people who are lost that they need to bravely go for it…even if your ideas are unrealistic in the eyes of others, please continue to imagine limitlessly. When you can’t walk anymore then run, when you can’t run anymore then fly. At the same time, this song encourages us too.

Gao Zhen: There’s too many songs I like so I can’t pick one, but I want to tell the story of ‘12345’. At the beginning when we started discussing this song, we knew it wasn’t going to be a song with an MV. And 12345, this sentence in the lyric actually just came from our habit when we write lyrics, didn’t expect that it would turn into 5 meaning the counting of 5 fingers. Two people going from strangers to lovers, isn’t the most important step to count 12345 and hold hands?

San Zhi: My favourite is the song ‘Lonely’. Simple and straightforward together with a arrangement so sweet it’ll give you cavities, it clearly expresses honest emotions towards someone special. Longing and love, without you by my side everything is meaningless. Hurry up and learn this song to sing it to him/her!

Shao Yu: ‘Red’ and ‘Kid’, these two songs are at the very beginning and end, and have completely different personalities. One is an extroverted release of passion and energy while the other is the precipitation of ones’ most introverted thoughts. At the beginning when we were arranging the track order we wanted to create an ending like this, perhaps everyone can start anticipating what connection this will have with our second album.”

With a whole array of subgenres, vibes and creative ideas flowing through the spirit of Sugarcat, their essence can be likened to that of a candy shop. Full of tantalising, delectable options that you can’t wait to gorge out on, in just one album they’ve sampled from all kinds of vintage and progressive R&B styles from both the East and the West whilst keeping their own unique sense of vigour about them. But as the boys have hinted at during the interview, this album is just a tasting platter for the sweet treats that are to come. With their debut release, one thing is clear: Sugarcat’s candy shop is now open for business!

Sugarcat’s debut self-titled album is now out on all major streaming platforms. Be sure to follow them on their Facebook and Instagram to keep tabs on their Candy shop offerings!