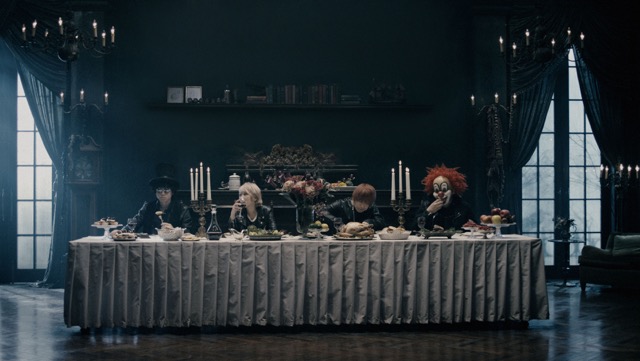 Interview with SEKAI NO OWARI – Happiness Is Hard-Fought

SEKAI NO OWARI is a name that is mostly unheard of in the Western world. However, step foot into Japan, and what one will soon realise is that they are a J-Pop phenomenon and household name; much like Taylor Swift in the sphere of Western music. Coming together in 2007 and initially playing to no more than 15 people in an abandoned warehouse, the band which consists of Nakajin, Fukase, Saori and DJ Love officially debuted in 2010 and solidly accumulated in success before rising to meteoric fame with their hit single “RPG” in 2012, which has over 96 million hits on YouTube to date.

Playing to sold-out venues such as the legendary Nippon Budokan and Nissan Stadium, and with more than a couple chart-topping singles and awards under their belt, the band is well-equipped for their upcoming debut into the US music industry. However, the funky and eclectic indie-pop band didn’t exactly breeze their way out of obscurity to become one of the most popular bands in Japan. Theirs is a story of tumultuous times, new beginnings and self discovery, showing us that their happiness and success was anything but easy.

In speaking with us, the band were open about what went on behind the scenes in their personal lives. Lead vocalist and songwriter Fukase especially spoke candidly of his experiences with mental illness which ended his budding career in medicine, initiating what was to be the darkest period of his life. Yet it was this exact feeling of the world collapsing around him that inspired the band’s name SEKAI NO OWARI, meaning ‘End of the World’ which kick-started a musical journey fuelled by the desire to share a message of love and positivity. When asked why he dared to share so boldly his painful journey of internal struggle, Fukase had this to say: “I want to help guide the way for those young minds who are under similar circumstances as mine; so they don’t lose their way, or lose confidence in themselves.”

Furthermore, the youthful vocalist also had some immensely meaningful words of wisdom for those who are currently struggling with a low point in their lives: “Dreaming about tomorrow won’t make any difference for the present moment. Relying on someone else won’t help but we can only change ourselves. I know you all know that very well. Be strong, my comrades.”

Evidently, it has been Fukase’s optimism as well as the love and support that he felt from his band members during this tough period which has shaped the messages that their happy and powerful lyrics bring. However, their music itself is known for being a unique fusion of classical, video game, rock and hip hop genres. Nakajin, SEKAI NO OWARI’s band leader lets us in on the difficulties that led them to their nonreplicable sound:

“It was just two of us in the beginning, Fukase as a lead vocal and I played guitar. We were looking for a drummer and bassist but couldn’t find people we clicked with. We knew we needed more members to form the group, so we talked to our friend Saori who plays piano and Love the DJ, and asked them to join us. This is how we started unintentionally with these members. It is an odd and unusual combination, but we created something outside the box because of it.”

Furthermore, it is not just the fact that the band was composed of different instruments that made them stand out from the crowd, but also their inimitable chemistry which seems to be the glue piecing their varied interests into one cohesive sound.

“We all have different taste in music; Fukase likes hiphop, Saori likes classical music, LOVE likes rock, and I like video game music. But we understand each other really well because we are childhood friends and currently living together in the shared house. When there’s a conflict between us, we overcome the issues by talking it out with respect for each other“, Nakajin says.

Indeed, the group’s mutual respect and love for one another is what helps them through various conflicts, with every member regarding each other as family. Saori is seen to be the selfish older sister, Nakajin the reliable older brother, Fukase the carefree dad, and DJ Love…the pet elephant? In clarification of DJ Love’s interesting role in the SEKAI NO OWARI family, Saori kept her explanation short, sweet and simple: “Because he is gentle, big, and he likes to eat.”

The band are so close, that even when I posed to them the usual ‘stranded on a desert island with one person’ hypothetical, they all replied that they couldn’t pick just one! When asked what their motivation for entering the US Market and sharing their music with the world was, Fukase’s answer was quite very adorable: “Our motivation was for us to travel the world together”.

And it seems that SEKAI NO OWARI’s dream will be coming true soon enough. The band has already taken the first step by initiating cross-cultural collaborations with electro-pop great Owl City. Nakajin, who is a big fan of the former shares with us how it all went down: “My manager knew that I was a fan of Owl City since his debut, so he made an initial contact to get in touch, and that’s how we started to work on our collaboration. Mr.Heartache was produced by Owl City, and we featured in his song ‘TOKYO’. He also joined us at our show in Japan in 2014”.​

So with the backing of an established Western talent like Owl City, all that’s left is for SEKAI NO OWARI to publish some new works to showcase to Western audiences before they can begin touring and sharing their music with an entirely different audience. Nakajin shares how he feels about such foreign experiences, especially in terms of writing and composing in English:

“When working on songs in English, I try to think of myself as someone from an English speaking country. It’s a totally a different feeling than working on Japanese songs. It’s really refreshing and exciting at the same time. It’s like we are in a different band.”

DJ Love also chimed in with his thoughts on cultural obstacles, addressing the importance of spoken language to a listener’s acceptance of the music.

“I believe language is very important for a song to be loved for many years. There are rare cases when people feel connected to a song regardless of the language too. But I think there is barrier when reaching out to more people, it’s more difficult to have them engaged with music if they don’t understand the words.”

Nearing the end of the interview, Saori also had some thoughts about the band’s ultimate aim in making music which we felt represented what the band stood for without contention: “I would be happy if our music inspired people to share special moments. That’s why we want families to come to our concert. It’s the idea of people listening to our songs with their loved ones, and people making new friends. “

Encompassing a feeling of warmth and happiness that one feels when with friends or family, the overpowering, naive happiness that SEKAI NO OWARI’s music’s promotes is not one that was decided upon flippantly. It comes from a potent mix of troubled times, the healing support of loved ones, a unique amalgation of creative energies and a hell of a lot of fighting spirit. Whether it was fate or coincidence that brought the four of them together, SEKAI NO OWARI has now made it their mission to share their brand of hard-fought happiness with anyone who is willing to listen; even if it feels like the world’s about to collapse tomorrow. So in lieu of their upcoming debut into the US music industry, my advice is to give these guys a listen-chances are, you’ll be hooked on their addictive brand of happiness 30 seconds into the first song. I promise.
​
SEKAI NO OWARI are currently in the process of planning a North American tour and debut into the US music industry. Keep in the loop by following their Facebook page here.