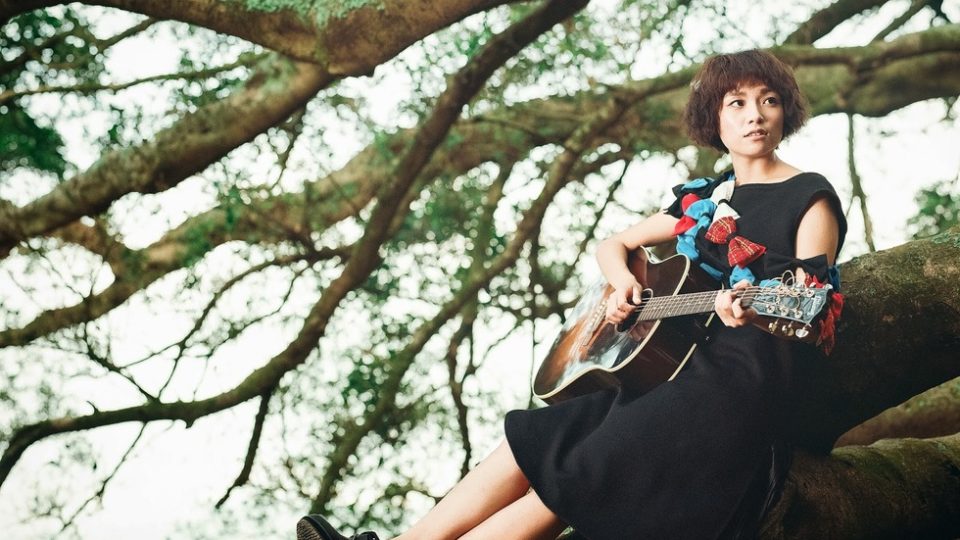 Interview with PiA 吳蓓雅 – Isn’t This Life? The Girl With The Guitar Starting Over

PiA is a new face that was nominated for this years’ Golden Melody Awards in the ‘Best Performance Group’ category. They are composed to lead singer PiA（吳蓓雅), Bass player Hsiao Bo（Chen Bo Cheng陳柏誠) and Ukulele and drummer Hsiao Yi (Yuxin Lan俞心嵐). Through light and fast melodies they create imagery of life’s sad, happy and unexpected moments and have moved many a fan with their music.

However to PiA band, the critical acclaim that has come from the mainstream music world has come a little too late. After releasing their album “Isn’t this life生活不就是這樣”, two of the band members left, leaving behind PiA by herself. PiA herself mentions regretfully “Now there’s no PiA band anymore, just PiA.”

◎In five years the band has reformed four times, isn’t this life? This band that was started in 2010, in five years experienced four reformations with band members coming and going. The band was united and split, with the only remaining member PiA shouldering her way through it all.

At the beginning, the band was a two-person act by PiA and Kuo Yi-Hao（郭一豪), before adding Hsiao Song on the backing vocals and drummer Lin Bi-Da（林弼達), making it a four person act. In 2011 it once again became a two-person group with PiA and Hsiao Song, but regretfully, at the end of 2012, Hsiao Song also left the group.

This was with no doubt a difficult time for PiA. Within the space of half a year she had no income from performances at all, and could only rely on teaching guitar to make a living. The song ‘Isn’t This Life’ was written about this time. To the ear, it has a clean and happy melody but underneath all of it is hidden PiA’s feelings towards society. No matter what, we still have to continue. PiA said it this way, “I tried using a light and breezy attitude to look at a lot of burdens of life.”

In 2013, PiA band came together once again. Hsiao Song（小松）, Hsiao Yi（小翼） joined, letting three individuals of similar ages and of a similar passion for music to come together. Other than focusing on songwriting, they began trying different things.

Through a coincidental opportunity, PiA met a manager from Beijing, and was given a chance to release a Japanese album and to tour. Performing far away in Japan, the biggest problem especially for struggling independent musicians was money. “At that time it was trendy to crowdfund, it was just that there weren’t many who were doing it, so we just thought we’d give it a try.” So PiA band joined together with Cheshire Cat（柴郡貓） to start an internet crowdfunding campaign in preparation for their trip to Japan. Thinking back to that experience, PiA’s voice hints at laughter. “I didn’t expect it to be that successful, because wanting everyone to take out money and fund you to do something you want to do is a hard feat.”

While crowdfunding, PiA band also prepared their internet-based show “Ah look at PiA”（阿你看 Pia）. Talking about doing an internet program, at the start PiA was extremely honest. “That year we had no works to put out, so we wished to do something a little different.” For them, doing an internet program nationally or internationally, in the future everyone will still be able to see them.

Of course, the band’s main vocation was music and so after trying many different things, in July 2014 they released an entirely new album “Isn’t This Life”. Pia describes the theme of this album as “a little bit feeling like we’ve started anew, for this album I also wrote a lot symbolising three people starting their journey anew.”

But something that causes regret is, not long after the album was released, the other two band members once again left. On the band’s disbanding once again, PiA was a little hurt. “I do feel a bit taunted, it’s already like we’ve started anew, yet at the end  everyone’s left again.” Of course she can also understand that in the music industry wanting to keep going is not an easy thing to do; “Isn’t this life” sang out PiA band’s innermost thoughts and feelings, perhaps she herself is a metaphor for bands disbanding.

PiA band was nominated for this years’ Golden melody Awards in the ‘Best Performance Group’ category.

Was the Golden Melody Awards a ‘one night as a celebrity’ feeling for you?

But at the same time it was this album that sent PiA to the Golden Melody Awards ceremony. This critical acclaim from the mainstream music world left PiA a little helpless, she describes it as her ‘one night as a star’ experience.

“It was really hard for me to acclimatise to that atmosphere, songwriting usually consists of staying at home and writing things, the most dramatic part of this job is wearing a pretty dress on stage and interacting with audiences. Coming to such a large ceremony and in front of so many photographers and journalists showing myself off I really feel very uneasy. This one night as a celebrity experience was very painful. When you are standing in a mainstream environment, everyone has to immediately see your uniqueness, in this area I really need to learn more.”

As hard as PiA finds it to get used to the extravagance of being under the spotlight, the success that she’s received in the indie music scene comes from the acclaim given by the Golden Melody awards. Such acclaim has an underlying realistic purpose; to let those who support her feel that she has always been moving forward, and at the same time to let her mother who constantly worries about her to feel comforted.

When asked about what she has yet to do but wishes to conquer after five years in the industry, PiA laughs and says “At my  performance in September at last year at Legacy I was finally able to get Bobby Chen (Chen Shen) to be my special guest. This allowed me to feel like nothing would ever be impossible anymore.”

In order to understand how she met Bobby Chen, perhaps we must understand PiA’s persistence and passion for music.  To request that he be her special guest, Pia vigorously contacted his manager, record label, sent hand-written letters, performance plans and CDs. A reply was only sent back two months later; Bobby Chen gave her the huge task of being the opening act for his New Formosa band concert, and her performance did not let him down. And so in proceeding concerts such as the Simple Life festival and Countdown concerts, PiA and Bobby collaborated time and time again.

Asking him to be her mentor also happened during their collaborations. Talking about the journey to Chen becoming her mentor, PiA herself was not entirely sure, “After we went to Taitung’s Iron flower village to perform, everyone was drinking and chatting. big brother Chen suddenly told his drummer Ah-wen ‘Tell PiA don’t let her think we are begging her.’ I didn’t understand, and brother Ah-wen then told me ‘PiA, big brother Chen is asking you to call him your mentor.’ So I picked up a drink to salute him, and that was that, a rather blurry situation.”

Music is always the reason and meaning that PiA has worked towards, “I’ve always thought that this thing called music has to be done till the very end, I don’t wish to earn a lot of money from it. I feel that being able to support myself and workers and to continue doing so in the long term is good enough.” And her fate with mentor Bobby Chen allows PiA even more confidence towards the future. When deciding to learn under Chen, PiA’s heart calmed down a lot as no matter what happens, at least there will be that one person to give you advice.

Starting over, PiA who is starting her journey alone hopes that in the coming time, she can devote herself to creation, playing with new elements in her music and “again going to do those things that I’ve only seen done, yet was afraid of doing”.