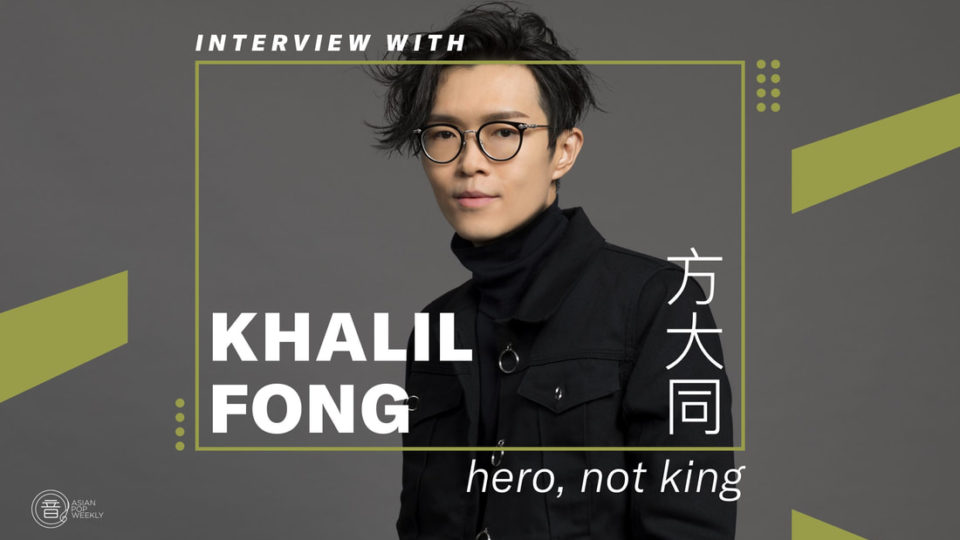 When asked what it is that inspires him to create; Mandopop dark horse Khalil Fong’s answer was succinct, but universally meaningful.

“There are various reasons but I guess primarily a sense of responsibility to the art itself.”

Khalil’s position in the Mandarin music industry has always been unique. Whilst the likes of Jay Chou and Wang Leehom are crowned Mandarin pop royalty, the title sounds a little off when applied to Fong, who just seems to be legendary in his own way. In fact, his thoughts on responsibility seem to echo in the path of a certain arachnid superhero.

Indeed, the 35 year-old musical mastermind has fought an uphill battle ever since his debut almost a decade and a half ago; first pioneering the incorporation of R&B, Soul, Funk and Blues into Mandarin pop music. But even now, Fong continues to incorporate an attitude of diligence and social responsibility into his ever-growing body of work.

“I’ve always considered myself a world citizen and my musical tastes are quite eclectic. I think I’m always working my way towards the blending of ideas and cultures whether consciously or subconsciously.”

His recent exploits have increasingly revealed his passion for blending cultures, as seen from his biggest project to date; arts label FU MUSIC which he established in 2016. From writing and producing for himself and others; to mentoring artists under his label; to releasing a series of educational and inclusive books for children, we HAD to know what this global citizen’s secret to success was:

“Nothing is too difficult and nothing is that easy so you may as well just do it.”

On the release of his children’s book series ‘Emi The Dream Catcher’, Khalil shared his plans for future instalments and the reception of parents and children to his multicultural project.

“So far I’ve had great reviews from parents who are required regularly to read these books as bedtime stories. I’m glad the kids are extremely receptive to the characters and enjoy the stories. I’ve just about completed the next 3 stories and will be publishing them sometime this year as well. For every book I also release a song tie in which is fun imagining that by the time I’ve released 30 books, I’ll also have a collection of 30 children’s songs.”

And while wider audiences may have gotten the idea that Fong was forever retreating from the spotlight after releasing his last major album ‘JTW Journey To The West’, the fluid creative has proven his point not only through words, but also action; releasing singles ‘Fake Monk’ and ‘Throw It Off’ in 2018. While the release of ‘Fake Monk’ showed how with Fong’s magic touch covers could be vividly reimagined, ‘Throw It Off’ kicked off the singer-songwriter’s latest concert tour ‘TIO’ and describes his philosophy.

Fake Monk
“When I first moved to Shanghai in 1990, Cui Jian was one of the first Chinese artists that I listened to. His album was on loop during my primary school years. I recently appeared on a TV show Mask Singer and since they only sing cover tunes, I felt it was a great chance to actually do my own version of one of my favourite classics, ’Fake Monk’ and release it officially.”

Throw It Off
“‘Throw It Off’ stands for the philosophy of letting go or being detached from the negative or humanity’s lower self. The lyric continues to sing ‘…follow your heart’ which is describing the idea of listening to our inner conscience.”

The world tour which kicked off a few months back is a welcome addition for fans of the singer they affectionately call ‘Soulboy’, whose last tour was in 2014. For those anticipating his return, the artist promises an experience that –as always- is humble, but filled with musicality and heartfelt innovation.

“I’ve prepared a bunch of ‘classics’ that are probably on their playlist along with a couple of newer tracks. I would say it’s fun to get together with my fans who haven’t seen me for quite a while.”

A passionate musician with a level head is a rare sight and a hard combination to pull off; but Khalil does so with humility and aplomb. As his abilities as a musician and artist have grown and changed over the years, so has his ability to tackle bigger issues close to his heart. While for many, this east-meets-west approach to his music may have seemed sudden; to me, it is perfectly aligned with Fong’s heritage and yearning for making the world a better place.

Breaking cultural boundaries and setting the bar higher than it’s ever been; Fong is the one to watch for his ability to look at the world as a place not divided by nations, but united by the fact that we all have differences. In words once used to describe a favourite superhero of mine, “A king fights for his nation. A hero fights for everyone”. And what a modern-day hero Khalil has turned out to be.