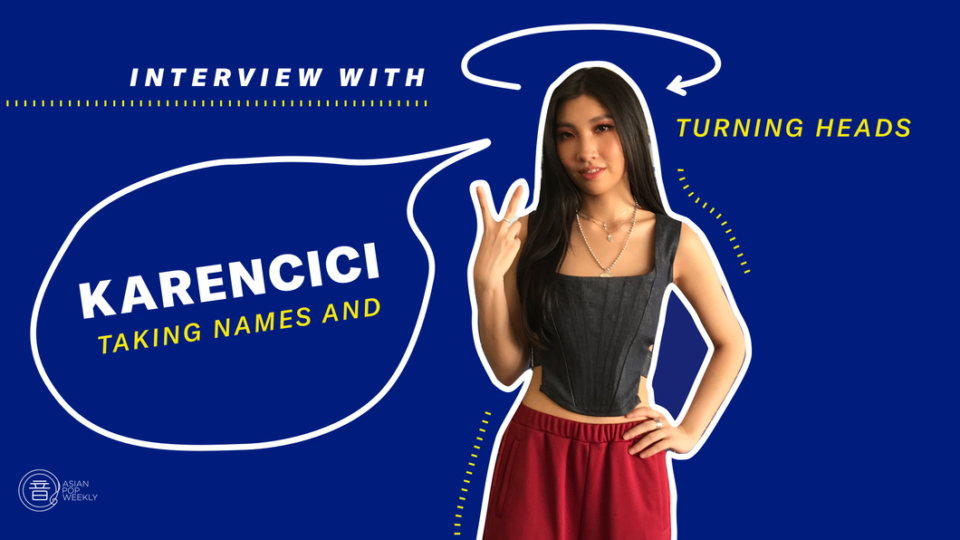 Entering the music industry at the young age of 16, Asian American singer-songwriter Karencici aka 林愷倫 was unsure what the road ahead had in store for her. Yet she packed her life into a suitcase, and came to Taipei. Initially gaining some visibility on reality show The Voice of China as a mentee under David Tao, four years later the singer-songwriter has released her debut album ‘SHA YAN’ with a completely different vibe and aesthetic. Rather than the dark rock chick we saw on our screens four years prior; Karencici’s current vibe is refreshingly fashion-forward, progressively urban, and unapologetically feminine.

“When I was on the competition I was only 18, so you know at that time I didn’t really know who I was, I was just following whatever directors told me. ‘Oh we feel you should go for this … dark, rock girl type of vibe’, so I was like, ‘okay whatever, as long as I can get on the show’. It was after the competition I got to know myself more, know music more and I realised…I like R&B and hip hop, so I just started doing my own thing.”

With a raspy, yet crisp vocal line, and adventurous pursuance of the R&B, EDM, Dancehall and Hip-Hop genres, the young creator has effectively remade the rules for how Mandarin pop artists and musicians approach urban and electronic styles. Rather than copying and attempting to master the techniques of the Kendrick Lamars and J. Coles, Karencici reaches beyond to create something far more transformative and representative of her cultural background.​

“The concept of this album is basically – cos it’s my first album ever, I wanted to create something that could represent me, Karencici as an artist, as a 20 year old creator. So I wanted to include as much genre and style as possible. So there is R&B, there is EDM, Dancehall and Hip hop, which is all the stuff I love.  I love making beats, I love writing songs, so I just wanted to show everyone what I like and who I am.”

Behind the tasteful, fresh looks and attitudes that come through in her music, chatting to the young creative in person revealed the youthful 21 year-old’s girlishness in ways that added more to her charm. No attitude or prickly sass, her outlook explains the honesty and underlying positivity that comes through in her latest album; from songs that encourage fellow ladies to stand up for themselves to bops that document her experiences as a 20 year-old.

“My favourite track would have to be a song called 20, because I feel like that song out of my album is the most raw, me song. It’s about my struggles in this period of time as a 20 year old . I feel lost sometimes, I don’t know what I’m doing and I just wanted to write a song to tell myself I’m not that bad, I’m doing pretty okay for a 20 year old…so you know don’t give up,  keep going…”

Coming from a single mother family, the progressive feminine perspectives and attitudes that come through in SHA YAN are striking and a hallmark of the down-to-earth singer’s style. Although she probably doesn’t see it that way, we see this album as a poignant contemporary feminist manifesto that aptly documents new definitions and iterations of what it means to be a woman in this day and age especially for the younger generations. Of course, we had to get Karen’s thoughts on what she thinks it means to be a woman in today’s politically charged atmosphere.

A rich plethora of experiences also play a part in the creation of Karen’s album; after all, gems (musical or otherwise) are formed through times of pressure and duress. Whilst not going into too much detail, Karen spoke about her initial move to Taipei at 16.

“When I was 14 in LA I joined a competition with my mom actually, but my mom didn’t get in and I got in. And one of the judges, he was a producer in my current company (Bing Wang)… I decided to drop everything and move to Taipei when I was 16. At first it was fun, because you know like ‘oh yay no school, nobody’s gonna stop me from doing anything’, but then the reality hit me, like ‘oh what am I doing?’ (laughs). But I think it was great that I started early because I got to see how the industry really is and I got to really just learn and have to make myself grow in a very short period of time which I think it was very helpful for me to experience as a musician and artist.”

Despite being only 21, the artist has already written on tracks for the likes of Jolin Tsai and wormed her way into the bedrock of the Mandarin music industry. Yet with opportunities abound and time still a luxury, the young artist often wonders about what could be. However, her answer nevertheless continues to gravitate towards a lifelong flair for creativity.​

“I actually think about that all the time, I feel like if I wasn’t an artist I would still be interested in the arts, maybe like fashion design, graphic design, that kind of stuff.”

Already having made moves in South Korea prior to her debut with EP ‘Blow Up’ where she produced for the first time and collaborated with local rapper Junoflo, Karen’s trajectory as an artist is far from cookie cutter expectations. With Taiwan and South Korea within her grasp, the world is truly her oyster for this young artist who internalises the universal potential of music in her works.

“Cos I feel like (with) music, there’s no line. Music is music. When it’s good its good, doesn’t matter what language it’s in. I would be down to go to different cities or states to perform, or just connect with the audience.”

And connect she did on her first trip to Singapore where she recently played at the Skechers Sundown Festival. Quietly determined and with a stage persona that is all her own, Karencici turned heads and took names; even garnering herself a shout out from local singer-songwriter Charlie Lim during his showcase. With music that dares to break down boundaries; both technically and thematically while propelling very real and intimate perspectives, Karencici is the one to watch. In her tracks we catch glimpses of a world not incrementally different from the one we currently live in; but the best snapshot of it as seen through the eyes of this incredibly unique female artist.