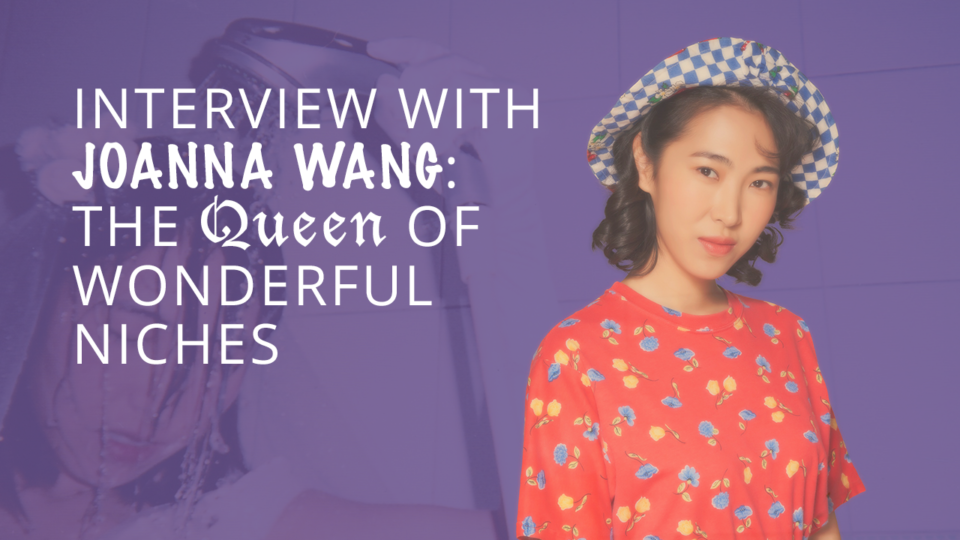 Interview with Joanna Wang 王若琳 – The Queen of Wonderful Niches

In collaboration with Taiwanese YouTuber/singer-songwriter Dena Chang, Asian Pop Weekly is launching an all-new video & print interview series called ‘Cream of the C-pop’ where we go deep with our favourite Mandopop artists to create effortlessly engaging content accessible for both Eastern and Western audiences. Each episode will comprise of a video interview and tailored game segment hosted by Dena aired on her YouTube channel, released with the feature right here on Asian Pop Weekly. ​​

Those choice words were how Taiwanese-American singer-songwriter Joanna Wang ended one of many passionate rambles educating us on the fascinating Australian cosplay wrestler Ladybeard and how he had chanced onto his niche in the Japanese market. In hindsight, it seemed that such rambles occurred frequently (and were very much fuelled by us) during our interview with the artist, where we discussed everything under the sun from Wang’s latest album ‘Modern Tragedy’ and her musical process, to her celebrity crush on Alan Rickman and love for Harry Potter (she’s a certified Slytherin).

But all these seemed like logical progressions for the affable artist, who has come into her own with eclectic musical offerings which span all kinds of genres, aesthetics and sentiments with seemingly no rhyme or rhythm; bar one. The fact that they are all niche offerings, satisfying Wang’s love for what she calls ‘wonderful niches’. Indeed, Joanna herself has created a ‘wonderful niche’ for her own musical offerings; an eclectic snowball of musical gems, comedy and storytelling, injected haphazardly into the Mandopop and wider internet landscape for fellow pop culture enthusiasts to dig deep and discover.

And although her more recent works are far from mainstream Top 100 fare, Joanna has never intended for her music to be a mystery to anyone-it’s just that it’s probably best appreciated by people who share her unique jumble of sentiments and interests.

“I’m not writing it to be an enigma or anything…if I were an audience I would write stuff that I think I could get or appreciate, or things that make me happy and I want to express it to people.. It’s a pretty straightforward process. I have feelings and sentiments that I want to share with people, and it might give them something nice, just like how pop culture has given me many many wonderful feelings.”

Even the back stories behind the creation of her songs and concepts showcase a musicality, humour and aesthetic that is uniquely Joanna-geeky, awkward and humorous; but with an aura of confidence and sweetness that endears her greatly to her fans. She let us in on the conception of the ‘Modern Tragedy’ title and the inspiration behind a few other tracks on the record:

Modern Tragedy
“So I’m really close friends with Lara Liang and her sister Esther. I remember I posted this picture on Facebook… I was working in Finland at the time and I was trying to buy a pizza. I guess I couldn’t really understand the subtleties of the variations of pizza in Europe so what I ended up getting was a calzone…when I opened the box … it was just like a round, strange configuration of dough and filling… I took a picture of it and I posted on Facebook in all caps ‘I JUST WANT A PIZZA’. Esther, she commented and just wrote ‘your life is a modern tragedy’. And I was like ‘ooo, modern tragedy’… Cos it was kind of like the perfect sentiment like…life is all these kind of like, underwhelming moments… But it’s also quite sweet.

Sabrina Don’t Get Married Again
“I had a dream this one time that I was in a 90s cover band, but it was kind of like a crappy garage band… I remember I was singing in a carnival that was super reminiscent to the carnival from Final Fantasy X-2. Not in the same universe whatsoever. But in my dream I was covering a song called ‘Sabrina Don’t Get Married Again”, in my dream that was an actual hit from the nineties…and then I woke up and to the best of my abilities tried to write it down…“

The Motorized Scooter Edo
“This song I’d written in high school and it was written because I had a massive crush on my band teacher…Basically what happened was my band teacher, he like got in like some kind of accident on a ski holiday over winter break, he broke his leg and had to wear this massive cast to school. And he couldn’t walk … so he rode a motorized scooter… There was this one day it was during lunchtime…and I just remember Mr Edo was riding on his scooter. He knows he’s funny so he was being a goofball, riding on his scooter with his one leg propped up…and he has his arm out …and it was just like, ‘this guy, somethin’ else’. And I had a massive crush on him for two weeks…and I wrote a song sometime in those two weeks.”

Often when you ask an artist about what inspires their music, they tell you something generic like ‘life’, or –lo and behold-a romantic relationship. So it’s refreshing to see an artist like Wang who shares such detail-oriented stories about the inspiration behind each of her songs, effortlessly using lesser-mentioned parts of the human experience to create immersive worlds of art and storytelling. Indeed, her concept of ‘Modern Tragedy’ is an apt reconstruction of this worldview.

“I really like narratives or stories where the protagonist is kind of a loser or an underdog. But there’s a lot of sweetness and humour and humanity in that kind of story.”

Be it a line of friendly banter, a wacky dream, or a schoolgirl crush, we’ve all had those moments that brighten our day just a little. And seeing them enlarged and transformed into fleshed-out narratives through the lens of Wang’s music is a heartening step towards a healthier palate of musical food for thought, especially in a relatively conservative music scene such as Taiwan’s. Despite penning all her work in English and having  audiences all around the world, we were curious to know why she continues to concentrate her efforts here.

“It’s just where my life is. And I haven’t really sought elsewhere…If there’s any kind of expanding beyond borders, I just feel like, it’s all in the internet. That reaches further, so. I don’t know, I’m happy just…I feel like I’ve found myself to be in a really like peculiar position that is working very well for what I want to do which is just to make albums.”

.After over a decade of experience in the industry, Joanna seems to be in a position where she truly knows what she wants and how she wishes to get there. Just like how she’s dug for musical and cultural treasures in the past and found so much fulfilment from doing so, maybe Wang hopes to recreate that feeling in her listeners when they chance upon her music, just as I did.

“I feel like the best way to enjoy music is when you can’t really find or don’t really know who that person is; it’s just this strange, abstract thing that exists in the ethers of the world. I always really like it when I can’t find who’s done the music. It’s like this little treasure box. That’s the thing I love about finding pop culture, or any kind of thing… When you have to dig for something, I think that’s the most magical part. The world is like big enough that there’s all this exciting unknown.”

Given her extensive discography and significantly different starting point in this scene, many may know OF Joanna Wang, but whether they really know her is another question altogether. But if you dig deeper; brushing away blistered and cracking layers of decade-old misrepresentations, you’ll find a sparkling gem nestled not that far from your reach. An artist so passionate about exploring the unknown in ways that supersede the arbitrary structures of pop music is hard to find in any industry; but I’m glad Wang has found her place here; in a space which just so happens to be MY niche. Thank you for always inspiring me to explore the unknown, and all the wonderful niches it holds.

Joanna Wang’s latest album ‘Modern Tragedy’ is out now on all streaming platforms. Check out her Facebook or YouTube to join her wonderful niche!