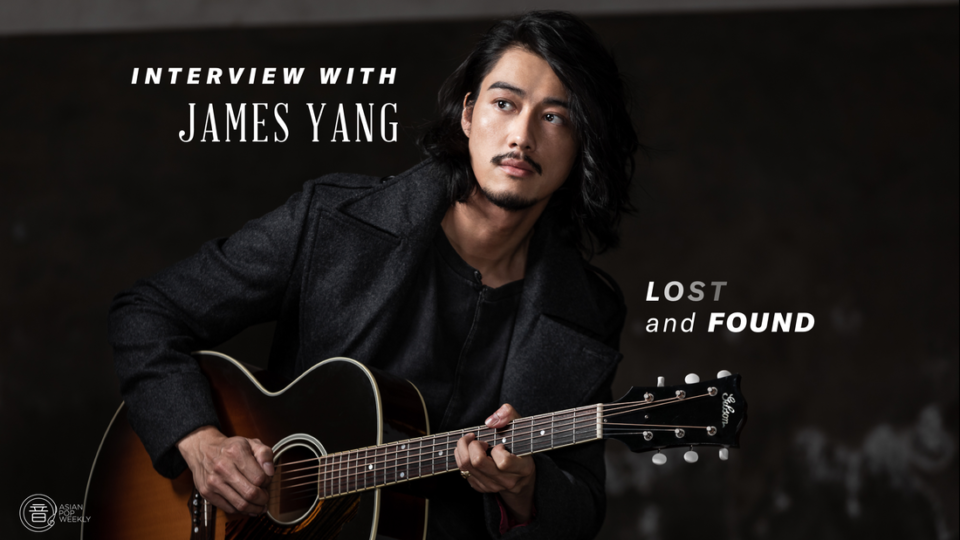 My first encounter with Eurasian singer-songwriter James Yang’s music was back in 2014. At that point in time, he was signed with H.I.M, and released a debut cover album titled “Stay”. Enamoured after chancing upon a clip of him performing an acoustic version of Eason Chan’s ‘好久不見 Long Time No See’, I pounced onto the album, only to find that it wasn’t as chock-full of his self-penned works as I had hoped. Yet, a single demo track at the end of the record simply titled ‘Clarity’ caught my ear; revealing a glimmer of undiscovered brilliance. That thought; and the lasting impression the Englishman’s gruff, soulful vocals had left on me remained embedded in my memory, lost but not forgotten until the announcement of a second bilingual album four years later.

Titled “Lost and Found”, the album’s name has multiple facets of meaning for the brooding artist, which is understandable given how meaningful this long-awaited release is to James. Not only was the title derived from outro lyrics on “Hold On”; a track written by James for his grandfather; the name just seems fitting given the artist’s past experiences.

“There are many themes in the album, many of which overlap and interlink: the sea, the colour red, moving forward despite adversity, and understanding that our past helps to define our present and future, but one major concept is the idea of being oneself – Lost & Found is the first time I’ve been able to be myself on an album – the amount of creative input I’ve been given is quite surprising, not solely in terms of music, but also album design, track listings, personal styling, and the album title. Prior to signing with my current company, Cros Music, I had been pushed in directions I was not comfortable with, and that felt like a period of being lost. Creating Lost & Found with Cros feels like getting back on track: being myself, showing my own songs and personality.”

Now an actor, a husband, and a dad, whilst Yang has been absent from our streaming platforms over the last few years, it’s all gone by in the blink of an eye; leaving my memory of the suave singer-songwriter’s potential unfazed. And it seems that I was not the only one the crooner impressed with his moving wordplay and soulful guitar-based melodies. Despite writing almost entirely in English, James shows that music breaks down borders through his company’s support of releasing both English and Mandarin versions of each song.

“When I write demos, I prefer to have complete songs, full lyrics, as well as the melody… I write in English.  My management initially planned to release a single CD, but when they heard the English lyrics, they decided it would be a waste to not also release them.  I think my management also realised that the personal nature of these songs meant that they should be released in the language in which they were originally written.”

Despite having chanced upon many a bilingual artist in the Mandarin music industry; there’s just something about James’ works that set him apart from the rest. Although it is common for artists to be more proficient in speaking English than Mandarin; what isn’t common is for these Asian diasporic artists to have such a strong emphasis on their lyrics as James’ music does. A highly skilled lyricist, as much as he is a songwriter and guitarist; Yang weaves together tales of fiction and fact into vibrantly realistic tapestries that assuage ones’ senses completely. When asked about the story behind some of his works, it seems that the story extends beautifully off the track and onto the page; especially for his track “Wind in the Pines”.

“Wind in the Pines opens with the protagonist trying to sleep on the forest floor in Winter, but the freezing winds howl through the trees, and keep him awake.  You then find out the reason why he’s in this beautiful but horrible place at such an unsuitable time of year – he’s carrying the body of his loved one to be buried on a mountain peak, so that they have a place of beauty to look out on forever. It shows his love for the deceased that he is willing to go through this awful and dangerous trial for them.  After completing his task, exhausted, he falls asleep next to the grave, despite it being even colder on the peak – showing it wasn’t the wind or cold, but the weight of the task that prevented him from doing so earlier.  But on waking, the protagonist realises he’s alone there, and has to face life without the person he grew up with. The bridge lyrics returns the listener to their now empty house, where all that once meant something, (the marks they made measuring their height, old photographs etc) have begun to rot or fade away, with only the walls remembering what went before. That idea gives me the same feeling as the sands stretching off in ‘Ozymandias’, or the verse standing, despite death’s hand in ‘Like as the maves make towards the pebbl’d shore’.”

Cobbling together a tasteful selection of literary, cultural and musical references that inspire him; during the interview Yang name-dropped everything from Ozymandias to Terrence Malik in an effort to describe his work and influences. For those that have listened to the album, it should also come as no surprise that Yang was not influenced by the usual pop or R&B that many other artists claim to be inspired by.

“My influences growing up were very non-Pop. I listened to Folk, Blues, Soul and Rock as a child, with very little of the Pop, Rhythm and Bass, Neo-Soul etc that now makes up the bulk of Asian mainstream music.  As a result, even though I now write pop music, I do so from a non-pop angle, so my manner of approaching a song is different to many other Mandarin artists. “

Although teeming with potential, James isn’t one to rest on his laurels. Humble and sensible, and with music that we’re sure would be able to move audiences worlds away; we had to know why he set his sights on the Mandarin pop industry.

“I’m half English, and grew up in London, but I’m also half-Chinese, a side which I neglected completely when I was young.  I wanted to find out more about the other side of myself. I enjoy travelling and giving myself challenges, so this seemed a fun thing to try.  If I’d stayed in England, it would have been much easier, but far less interesting or rewarding.”

​Always yearning for a challenge and clearly creative; it was interesting to note that Yang mentions it was a rather pragmatic decision for him to follow his passions. Seeing as the words ‘pragmatic’ and ‘passions’ rarely coexist, it just goes to show that the singer-songwriter’s uniqueness is more than just skin-deep.

“I’m quite lucky, as I’m both logical and creative (the two don’t always come together), and that allowed me to critically analyse my output.  If you are creative, and want to turn your hobby into a career, you have to be realistic, and brutally honest with yourself. Not all creations are marketable, or valuable in the estimation of others …  You need to measure yourself, and make a rational decision whether this is something you can put food on the table with.  I wouldn’t ever want to discourage someone though – whilst this is not an easy life, it is really rewarding, and a far more interesting one than I would have otherwise had.”

Serious and thoughtful, James’ passion burns subtly yet brightly. For all the stories he has to share, there seems always to be a gem to glean from his works. Be it a touching moment frozen and preserved in time; a vivid narrative brought to life; or an innermost stirring that pains the heart, Yang is a storyteller through and through.

In his album “Lost and Found”, he explores the dimensions of loss and recovery through the lens of his unique background and worldview; compiling poignant, timeless moments that breathe new life and possibilities into the contemporary Mandopop scene. Having myself lost his music before rediscovering it again; the album’s concept is a perfect reflection of newfound appreciations for rediscovered moments; and a great milestone marking James’ return to the scene.

Lost and Found’ is now out on all streaming platforms; don’t forget to check out his YouTube for upcoming acoustic versions and music videos too.