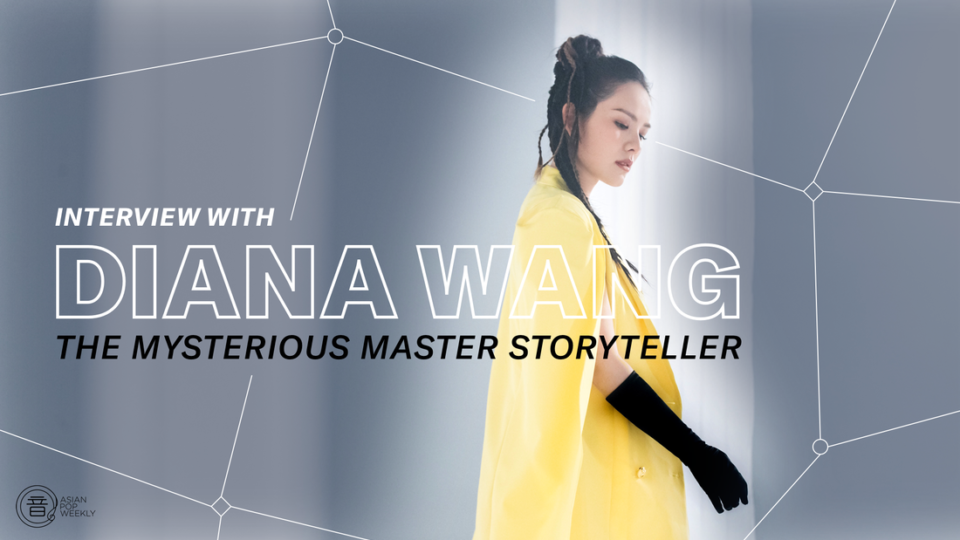 This article is part of our ‘Smoke and Mirrors’ article series. Read the other articles in the collection here.

Mulling over things after concluding my phone interview with singer-songwriter Diana Wang, I realised that the alternative R&B darling is (to the best of my recollection) the only artist whom I’ve interviewed three times*. Multiple interviews are a rare occurrence for various reasons, but the most pertinent one being that we only write features when we feel there’s a story there that needs to be told.

Wang is like a cat with nine lives; constantly reinventing, constantly reimagining and constructing new possibilities for herself as an artist. As a result, with each new body of work it seems there are always new stories to be told and new perspectives to be unearthed. So I was particularly looking forward to chatting with the Netherlands-born artist and diving deep into the experiences that lay behind her latest mini album ‘Moon’.

If her last album ‘Poem’ with FU MUSIC was a curated reintroduction to Diana Wang, Wang’s latest body of work ‘Moon’ reveals a deeper, more introverted side to the demure diasporic artist.

“When I’m alone, (my writing) is more like…the inside world of my mind…melody-wise, it feels like it flows freely… I always think about night time, even though it’s daytime… I think about the time that I’m alone in my room. It’s like, I have all this free time and space and just, you know, go wherever I want to with a melody…”

Delving deeper into a more mysterious sound that was first present in a lesser-known track she released back in 2016 called ‘Heartbeat’, Diana shared that the conception of this sound has its roots in a number of places; in everything from her personal voice, to the alternative genre preferences for the album and her partnership with the FU MUSIC team.

Both detail-oriented and freely artistic; Wang spent much of our interview unpacking the minute details of the creative process with ‘Moon’. For the calm creative, the devil is definitely in the details. As a result, the album and each of its supplementary parts are finely structured to contribute just so to the singer’s mysterious-yet-clean, airy-yet-dark sound. The singer takes us through the creative process for her first single ‘Intertwined’, and shares how ‘connection’ is one of the main underlying themes of this album.

“Intertwined…really represents the whole album. Because it’s about connection between souls; between all living creatures on this world… No matter in what form it is, it could be invisible, like, you know, internet, internet connects us, and phone calls and the subway on like underground tunnels. veins … in our body, wombs of the mother and the child … so just like the music video, there’s a scene that looks like a womb, that was actually more like an abstract form. That’s me with some red cables…that represents like, the veins and everything and in the womb and child is born…”

Whilst some of these details may be lost of mere mortals such as ourselves, it is the unique, ever-changing permutation of these details which come through on each listen that makes listening to Diana’s music a special experience. Discovering or re-discovering layers within this soundscape is what draws us in; intrigued to see what we can find if we dig a little deeper. Indeed, the mystery that surrounds this album is more than a genre switch or a lyrical device. It is an essence that thinly veils each track of Wang’s; that keeps us coming back for more time and again.

With this album also comes a more direct approach to storytelling and gives one not only more insight into Wang’s philosophy, but also topics and societal issues that she is passionate about. She spoke in length especially about the album’s fifth track ‘Space Farm’.

“In ‘Space Farm’ I talked about loving our home, planet Earth. And space is like actual universe ‘space’, right? But It can also be the ‘space’ of your mind, that ‘space’ that you can imagine things (and) grow things in your mind, just like a farm. And so I hope …that everyone can grow some good mindsets about how to love the earth, and waste less and love all the species… So this is also the connection of us with all the other species and everyone, basically.”

After going down the rabbithole of connections, perspectives and angles with Wang, we come back to the more tangible topic of being visual. As Diana shed a light onto her usual creative process, I found it to be uniquely visual; filled with photos that aid her in expressing her musical, lyrical or visual preferences. In particular, she shared a little about how she communicated her ideas for the themes behind her songs with lyricist Luke Tsui.

“I would have topics and ideas in my head. And I would just, basically start off with pictures. So I’ll send him photos of random things that he works with (laughs)…parks, little birds, little bambis… I feel that when I write melodies, especially for ‘Poem’, I visualise a lot of things. Or I look at photos. And this time with ‘Moon’ I didn’t really do that. But I did with the lyricist (laughs).”

And it seems that Diana’s affinity with using visuals to communicate her vision has made its way into all aspects of how she expresses her position as an artist in the Mandarin music scene; particularly through her newfound love for video editing and her skilful use of Instagram. For avid creators out there, you heard it here first: Instagram tips from Diana Wang!

“My tip would be: be consistent and be unique. And also at the same time, don’t care about how fast something is growing in the short term…It’s about building it up brick by brick, and having meaningful content in it… So you need to kind of build your own station; you need to build up your own thing. So yeah, I really believe that.”

As for editing, Wang shared how she feels like it’s just an extension of her creative process and another means to be actively involved in the creation of her own works.

“I mean editing is also creation. But then visual… if you edit the video yourself, it just makes it more complete. And it just brings out the message and the creation. There are so many talented people with all kinds of skills, but everyone really has their own style. And that’s not wrong or right, it’s just how it is. And if you really are clear about what you want to do, you might as well just do it yourself.”

Despite her calm and collected exterior, Diana’s passion and vision when it comes to creating something that is uncompromisingly her is palpable. For her, her music represents a sonic snapshot of her at a particular time, including everything from what she’s listening to to what she (and the world around her) is experiencing.

With the freedom to continuously create and release musical content that extends her visions further each time thanks to Khalil’s tutelage, Wang’s music seems to be developing much closer to real time than that of other artists on the scene currently. As a result, we too are provided with an insight on how she’s changing, developing and feeling with each new release.

With Diana, the thing that keeps me constantly intrigued is that with every artist, I get their deal and move on. But not with Wang. Her position as an artist and her musical works are truly unique, yet ever-evolving (yes, like normal human beings). And through various means, Wang reclaims control of her music in ways that gently discourage listeners to skip ahead to the next chapter of the story.  Instead, this master storyteller keeps you constantly occupied and inspired right till the next instalment, and even further still.

Diana Wang’s latest album ‘Moon’ is now out on all major streaming platforms. Be sure to check her out on Instagram and Facebook for more mysterious master storytelling!

*Editor’s Note: First for Hello Asia in 2016, second for Asian Pop Weekly in 2018 (as part of our Cream of the C-pop series). This article will be our third time interviewing and featuring Diana!