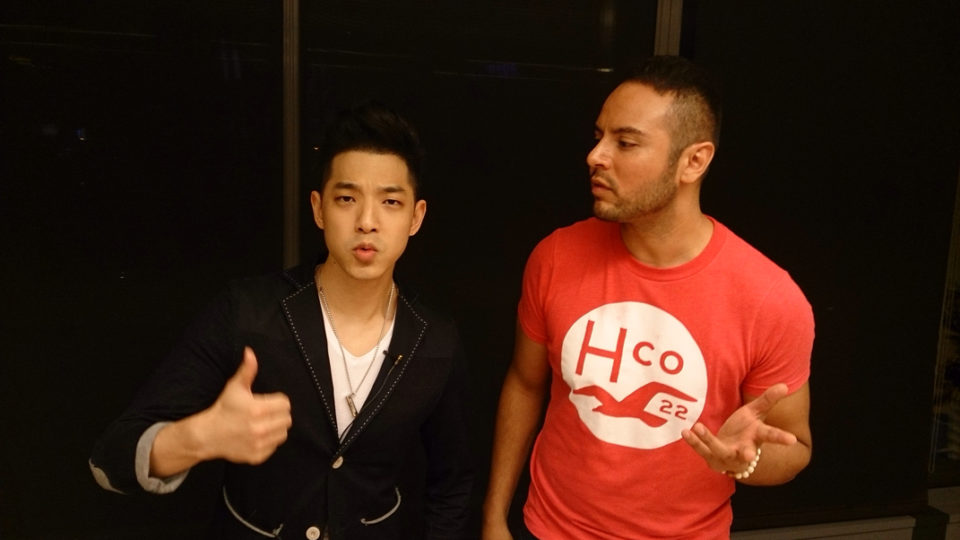 Poetic and caring, funny and smart, Wang Dawen opened his heart in this interview and talks about his past, present and future.

Within two years he worked his way into the music scene, conquering the girls’ hearts and originating a new singing style that most guys love to imitate. His voice and charisma opened the doors to success for him, turning him into a big hit in Taiwan’s stages. This immediately spread in many Asian nations and many more on other continents. Suddenly we all started singing“Beautiful” (美麗) and “Let’s work it out” (練習愛情), two of his most famous songs. Little by little we all became part of the thousands of followers that at the moment, are waiting for his next album.

His name is Wang Dawen, and he received us at the Universal Music offices based in Taiwan, where he opened his heart, unveiling his passion for music, his upcoming projects and, of course, that time when his heart was broken.

E: Let’s start with the good news: congratulations on the two million YouTube visits on the video “Beautiful”. How do you feel? Was this success something you imagined would to happen while writing the song?

D: Thank you! It feels great! I am very happy; I am thrilled!

To be honest, while writing this song I wasn’t thinking of any of that. When we released the album this was the song that escalated it really quickly among the fans and then we realized actually what was going on.

E: Your second big hit, “We Can Make It” featuring Kimberley is following the same trend. How did this song happen?

D: While writing the album I wanted to write a duet. It was something that I really wanted to include in my first work in Chinese. After I finished it, I was looking for people to sing it with. I thought of Kimberley because last year she had this song that I really liked, “愛你” (I Love You). I sent her the song and she liked it. We recorded it and she brought her very personal style to the duet. It was great working with her on this song.

E: The video reflects very traditional things from Taiwan. You have the late party at the KTV, the noodles after it…

D: Yeah! Actually the video was shot in a traditional KTV place. All the videos in “你好” (Ni Hao means Hello in English) reflect very traditional things from Taiwan that I wanted to share with the people that got to see my videos.

E: When did you decide to become a musician?

D: Ever since I was 5 or 6 (years old) I liked music. Then when I went to college I studied classic music and I was deciding whether to become a Broadway-style performer or a classical singer. But then I started writing songs leading me to where I am right now.

E: Five or six years old? What were you listening back in those days?

D: I grew up listening to classical music and Disney, of course (says laughing).

E: What’s your favorite from Disney?

D: There are three that I like the most. Aladdin, The Lion King and The Little Mermaid. I think those three have really good music.

E: Your music is very heterogenic. What are the basic foundations of your style?

D: Early on there was lots of music in my house. The living room had classical music so Bach, Mozart and Beethoven were always being played in the common areas.

My brother, he would have different things in his room. He was a huge fan of reggae, jazz, and rock so I also got to appreciate everything from Bob Marley and Charles Mingus to Nirvana. In my room it was all about Disney so I would listen to Fantasia, Aladdin, and The Lion King, so there were lots of things going on.

But what I think kept me grounded definitely was classical music and jazz. Those are my foundations. When I grew older I started to admire single-song writers and started to follow the work of Bob Dylan, Tracy Chapman or Stevie Wonder, writers that brought to the table their own music; people who wrote their own words and told stories.

E: You have a previous record called “American Me”. Compared to “你好”, it sounds more jazzy but angrier at the same time. What life experiences led you to compose that album?

D: American Me is a reflection of the experiences that I had living through college. As I became an adult in America I started to be frustrated with certain aspects of American society. I was born in the States, but sometimes I felt discriminated against. And I took all of that frustration and put it in my music. “American Me” is bitter, quietly angry, very serious, and even hard to listen. When I moved to Taiwan my life changed a lot. These frustrations suddenly were only memories and that gave room in my life for new experiences that led me to “Nihao”.

E: Obligated question… Who is this Jay you talk about in the Homonymous song?

D: There is a song on my indie album called I Hate Jay. He is a real person and his real name is Jay. He is someone I knew that I blame for taking away someone I really liked.

(He took a moment and then he confessed)

OK… There was this girl I was really close to and things did not work out between us. He ended up dating her and this experience traumatized me; that’s why I turned it into a song. The weird thing is, he became a fan of the song. He really liked it, even though he knew I was talking about him

E: How do you define both of your works so far?

D: “American Me” and “你好” are very different in topics and they were written in different languages while I was living in different countries. “American Me” is very complex and is very jazz-structured. It is full of jazz, soul and funk and actually is not very accessible. It is very direct and heart-felt about issues and topics I related to while living in America.

“你好” is very different… very happy, very positive. It’s me writing for the first time ever in Chinese and that for me was a big challenge. It was challenging switching languages: each language has its own rhythm and beauty. Even though I spoke a little Chinese before and my parents are Mandarin speakers it was still difficult for me to grasp Mandarin creatively. So “你好” represents a whole new beginning to discover a new language to sing it.

E: What do you think about Taiwanese musicians?

D: I think my knowledge about it used to be pretty limited. While living abroad I started to follow it with David Tao, and the Taiwanese rock from the 90’s and early 2000. After I moved to Taiwan I followed Jay Chou, of course, A-Mei, JJ Lin, A-lin, and Wa Wa. I feel Taiwan music is so broad and has so much style…

E: Do you have a bucket list? Was being a singer part of it?

D: Being singer wasn’t part of it but the goal.

Still I have a couple of things I really would like to do. I want run a marathon, skydive before 50, travel more and learn more languages. I have a small bucket list.

E: More languages? How many do you speak now?

D: I can only count English and Chinese. I used to speak Spanish when I was 15 years old because back then I was living in Salamanca (Spain), but “no me acuerdo mucho”(“I do not remember much”, says laughing).

E: Spanish audiences are exactly the ones that were asking for this interview…

D: I think that’s awesome! I saw sometimes people from different countries sending messages through Facebook or Twitter and I get very surprised about the places I am getting through my music. There was once a message from Argentina… It’s crazy how music is an international language and all you need is Internet so you can listen to anything. Actually there are lots of Latin artists I admire like salsa singer La India or the old Buena Vista Social Club.

E: We see that you take lots of time to reply to your fans…

D: I love people taking time to listen to my music and I try to read everything and interact a little bit with them every day. Thanks to them I do what I love and that is the way I can share with them a little of my everyday experiences.

The singer, who had to leave to (yes fans you can calm down) write and record some of the new songs for his next album, said good bye with a big smile on his face and a final message for all of his followers:

“Thanks everyone for listening to my music and all the support. I’m working on my second album in Chinese. It’s too early to tell but… anything can happen. The mood is going to change. I’ll play a little bit of funk, but it’s going to be fun!”