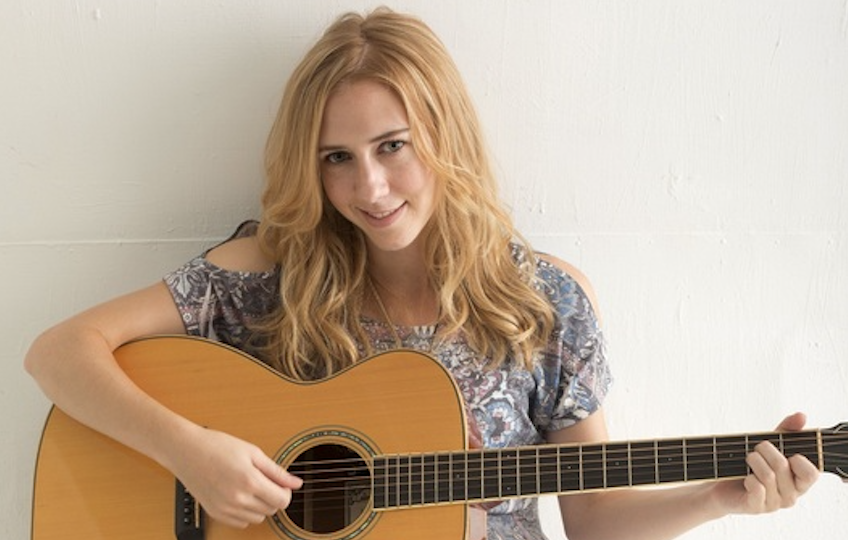 Interview with Christine Welch 克麗絲叮 – She’s One In A Million

“Can’t believe this is a white person singing”, was a friend’s response tinged with disbelief and envy when I introduced him to the latest object of my fan-girling affections- a multitalented singer-songwriter by the name of Christine Welch who has recently become the first Caucasian
solo artist to penetrate the Taiwanese music industry.

As politically incorrect as he sounded, I couldn’t have said it better myself. The blonde-haired blue-eyed singer-songwriter entered the spotlight in 2010 when she covered Mandopop superstar Wang Leehom’s “The things you don’t know 你不知道的事”, wowing audiences with her flawless mandarin pronunciation and lilting voice.

Fast forward five years, and Christine is now relentlessly pursuing her numerous dreams in a language that less than a decade ago was entirely foreign to her.

During our interview, it quickly became clear to me that fame and stardom was never the
intention of this New Mexico native, whose “lifelong passion” for the Chinese language and
music always came first and foremost.

“I think that what I want to do is break stereotypes here in Taiwan and in the US, I love making
music, but I’m not as passionate about becoming famous or marketing music.”

An inspiring conversationalist from the get-go, Christine’s aptitude and passion for languages
is clearly evident. However, when asked whether she was also fluent in French, Spanish,
Japanese, and Taiwanese, all additional languages she has showcased previously, her answer
was modest, but nevertheless impressive.

“Definitely not! … I would say I can understand a lot in these languages, but haven’t had a
chance to really practice speaking them.”

However, after beginning to study Chinese in college, there was just something about the
language that kept her coming back for more.

“I’ve always liked fantasy fiction, since I was really little…in my Chinese literature class we
read excerpts of the Zhuangzi, Chuci, Tang poetry etc. and they all contained a lot of magical,
fantastic and philosophical components that I had never been exposed to before.”

Appreciating the beauty of the Chinese “code” further fanned the flames of her curiosity.
Believing that “any translation couldn’t really convey the original meaning [of Chinese]”, the
now- fluent Chinese speaker set out on a quest to crack one of the most difficult languages in
the world.

But all work and no play was far from Christine’s secret to success- the bubbly 27-year-old
combined her passions for language and music to motivate herself “to learn, and obsessively
listen”; even picking up the Guitar which gave her learning experience “another layer of
newness”.

After completing her undergraduate degree in Chinese literature at Northwestern University,
Christine left her comfort zone, enrolling in the Masters of Chinese literature course at National
Taiwan Normal University as its only Western student while chasing her aspirations of
becoming a singer and author.

Juggling the triple threat role of a fledgling academic, author and singer-songwriter in an
unfamiliar environment; Christine speaks simply of the rationale behind her brave decision: “I
think while economic security is important, following your dreams is even more important.”

Luckily for Christine, she soon met other like-minded individuals willing to take a chance on
her. In 2011, her covers caught the eye of respected Mandopop producer Skot Suyama,

initiating a close collaboration that eventually led to him writing and producing a majority of
her 2014 debut album, “A Million Possibilities一百万个可能”.

Between him inviting her over to his house for their first collaboration and her not knowing
who he was, it was by pure coincidence that a little birdy assuaged Christine’s uncertainties,
allowing her to take the plunge.

“I wasn’t sure if I should go to a random producer’s house alone, but then about the same time I found out my friend’s roommate knew him, and he told me Skot was a great guy and not to worry!”

In 2012, Christine entered the industry sideways by collaborating with Skot on songs and
writing lyrics for herself and other Taiwanese artists; a trade that she fell into purely by accident.

“I’ve never written poetry or lyrics in English, at least not well, but after studying it so much in
my Masters program, it wasn’t completely unnatural to start. Skot invited me to his house to do
a song, but there were no lyrics written for the verse, so he asked me to try…And I went home
and it flowed out so naturally…from then on when me and Skot did a song together, I always
wrote the lyrics!”

Christine’s lyrics, a fusion of traditional Chinese poetry with modern techniques have attracted
attention from fans and fellow lyricists alike.

“I’m proud … that my lyrics have been praised by other Chinese lyricists, on merit not because
of what I look like!”

But such opportunities have not always been this forthcoming for Christine, who had yet to
face the challenges of gracing the stages of the Taiwanese music industry as its first Caucasian
solo artist.

The Taiwanese music industry has welcomed a diversity of artists in the past; smoothly
integrating ‘ABC’s (American/western-born Chinese) and Eurasians into the industry; some
barely Chinese-literate, including the likes of Mandopop legend Wang Leehom and teen sensation Kimberley Chen.

But what they haven’t yet figured out is how to promote artists like Christine who are few and
far between.

While other Caucasian soloists such as Jonny Blu and Corinna Chamberlain have successfully
penetrated the more diverse Hong Kong music scene, Taiwanese-based multiracial acts like
Beauty4 failed to take off mainly due to promotional issues and difficulties in audience
acceptance.

“I think similar to those bands that didn’t go anywhere, no one really knows what to do with
us, what our place is in the industry, how to promote us. It’s never been successfully done
before. “

But their similarities end there as the Chinese guru proves that audience reception is not based
entirely or at all on nationality, but on the forging of a connection that goes much deeper.

“I’m not sure about if I’m first [fully Caucasian solo artist in the Taiwanese music industry]…
But probably first to write her own lyrics! Everyone’s responses have been super positive,
because I think they can tell that I really love Taiwan and the Chinese language…but also
because most Taiwanese are well acquainted with the tortures of memorizing a new language,
especially as different as Chinese and English are from each other, and can really appreciate
the struggle it must have been.”

Most endearing to me was the fact that Christine entered the Taiwanese industry without
understanding the precedents she had so impressively set in her pioneering role as its first
Caucasian solo artist.

“Solo Caucasian artist in Taiwan, I think she’s the first. I think I would have heard about
someone else…” remarks the amiable songwriter and producer.

Despite a tendency to undervalue her achievements; the down-to-earth singer possesses a
maturity uncharacteristic of other newcomers; showing steely resolve when fighting for her
ideals.

“Well either the company wants to promote me as a ‘white foreigner girl’ which I don’t
appreciate very much, but attracts the most attention, or we promote the contents of my lyrics
etcetera, but you can’t really talk about it without pointing out my background, and so it’s still
a problem of how to put it in a way that attracts people without being opposed to how I want
to portray myself (sic).”

Being the first solo Caucasian artist in Taiwanese music history is not just a landmark
achievement for Christine, but entails a story that has drawn thousands curious about her
heritage and her motivations.

“What I really wanted to do through my lyrics and public appearances was to show that it’s
possible to achieve your dreams no matter who you are, and that language and nationality are
just social constructs… by learning about other cultures, we learn more about ourselves.”

After hearing about Christine’s supernatural drive, courage and perseverance, it’s only natural
for mere mortals like us to feel grudgingly impressed, yet overwhelmingly jealous in times like
these.

But I believe her story is a much-needed wake up call for those of us accustomed to merely
‘settling’: for that dead-end job, for that boring professional degree, or for societal barriers that
we’ve resigned ourselves to.

As Taiwan’s first Caucasian solo artist, Christine has achieved the impossible with her vibrant
and colourful dreams; changing perceptions between Eastern and Western worlds with her love
for music and the Chinese language one step at a time.

So take Christine’s lead and dream big. Life can be exhilarating, passionate and full of millions
of possibilities-but only if you choose for it to be.