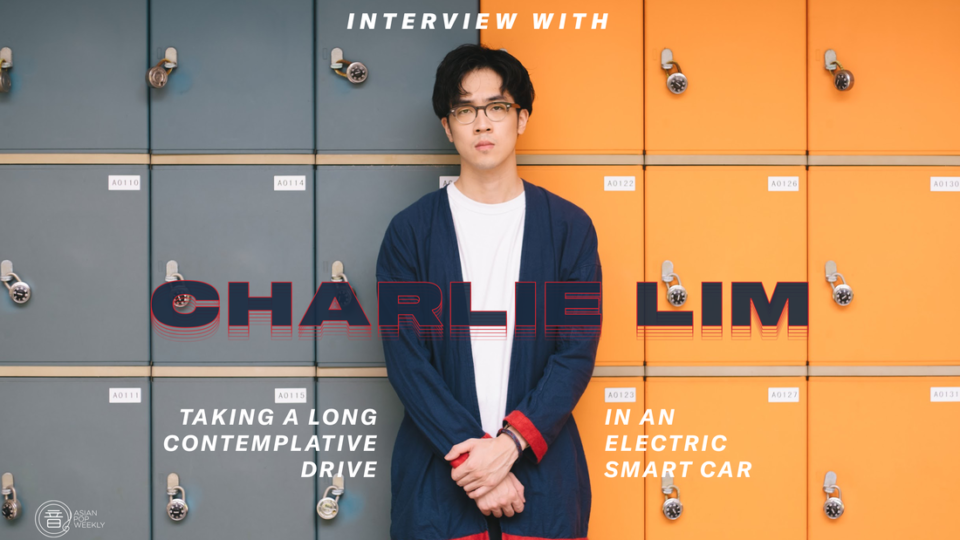 ​In one of my favourite tracks ‘Least of You’ from Singaporean-Australian crooner Charlie Lim’s latest album ‘CHECK HOOK’, the sensitive musician shared an interesting phrase previously used to describe the track.

“It’s kinda poppy but also has its own weird quirks to it. I got to play a little fuzz guitar solo at the end but it’s also part of this weird half-time section which I really love. Simon (Lam, from Melbourne duo Kllo…) said it felt like you were taking a long contemplative drive at night, but in an electric smart car. (laughs)”

Although technically the phrase wasn’t coined by Lim himself, the notion of taking a long contemplative drive at night in an electric smart car strangely appeals to me as a perfect way of describing the muso’s recent electropop works.

While a mishmash of R&B, Funk, Soul, Folk, Blues and Jazz have been used to describe his music in the past, the winner of ‘Fresh Vibe of the Year’ at the 2019 Youth Music Awards’ recent deep dive into the electronic genre has added an extra zing to his creation, making them thought-provoking yet slightly unhinging.

At times intense, and at others laidback; the vein of commonality that runs through Lim’s works has always been his eloquent writing style, and that thoughtful broodiness which critics (and teenage girls) adore about him. Kind of like a modern-day Charlie Brown. The boyish singer-songwriter let us in on the thought process behind his latest album.

“Writing’s definitely a cathartic process, although it can also become a negative feedback loop when you’re always hitting a wall and you’ve put a lot of pressure on yourself to produce something good because it’s your “job” as a writer. So I ended writing about writing. (laughs) A lot of the album is about that –an ode to overthinking and overworking, and also coming to terms with what makes me content.”

A self-professed perfectionist, Lim’s works have always for me been a balance between creative experimentation and a moving relation of his innermost thoughts. His creative process is certainly an apt representation of how his two artistic tendencies coexist.

“I guess (creating)’s like a reflex thing, after going through something or observing someone else go through it. Sometimes it comes from an innate need to release something from a more subconscious place, sometimes it’s a muscle to flex because it’s fun to explore and just make stuff.”

While the musician in Charlie now seems to take up almost all of his headspace, we were interested to know how it all came to be. Having considered careers in medicine or journalism prior to pursuing music full-time, Lim simply called his musical vocation “the path of least resistance”:

“I performed a couple of times for the school assembly in Year 10 and had no idea people would take on to my singing, and I decided to do more music subjects. One thing led to another, and I ended up playing Top Acts in Year 12 at the Hamer Hall and never really looked back. I think my parents were pretty concerned when I decided to drop all my sciences, and I can’t blame them…but I stuck to it and was lucky enough to be given opportunities along the way, and they slowly warmed up it. Cautious optimism. (laughs)”

Working closely with and mentioning several of his fellow Melbourne creatives (Simon Lam, Yeo) throughout our interview, the influence of both the cultural hub and local Singaporean influences on the Singaporean-Australian’s works are prominent. We dug deep to find out how his background has informed his works on the whole.

“The Melbourne scene is definitely a mature one, it can be ranked easily one of the best cultural hubs in the world. There’s good music happening every night, it’s really diverse and also many live venues for younger bands to play original music. It was a great place for me to learn and make mistakes. Moving back to Singapore didn’t feel that huge of a culture shock for me though, as things were already starting to change in the past few years. We’re a very young country, so there’s definitely a lot that can be done, but at the same time it feels great to be part of a movement. There’s no better time to do music in Southeast Asia than now.”

The crooner left Australia after finishing university and headed to Singapore, not expecting to stay long; but his drifting artist inclinations were put on hold and Lim found himself setting down roots in Singapore indefinitely, and even most recently tying the knot here (Big congrats!!).

Yet Lim’s music has always appealed to audiences especially across the Asia pacific; a testament to his ability to cross cultural borders with his unique blend of sounds. While he is by no means a mainstream pop phenomenon, there is something to be said for his solid niche following across the region.

“(Audience Receptivity)’s been good so far, just slowly finding a niche market for the type of music that I play across different regions. I think the internet helps a lot for that, and I wouldn’t say there are any language or cultural barriers that have gotten in the way. It’s more of just how much of the right exposure you get.”

Smart, reliable and appreciated by niche audiences, Charlie Lim’s musical offerings are like a contemplative drive in an electric car in more ways than one. But all jokes aside, Lim’s music has never ceased to amaze and inspire me, especially through his discipline and intrinsic motivation to deliver moving and creatively diverse works across all kinds of genres.

He challenges himself to stay open creatively and emotionally; incorporating his own multicultural experiences in a way that is palatable for most audiences; whilst always retaining his unique flavour. Exchanging multiple existential crises for our listening pleasure, Lim’s music is a hand-wrought experience actualising the infinite possibilities of both the Singaporean and Australian music scenes.

Find Charlie Lim’s stuff on all the streaming platforms including Spotify, Apple Music and Bandcamp (check out his crazy new merch too!). Find him on Instagram and Facebook.