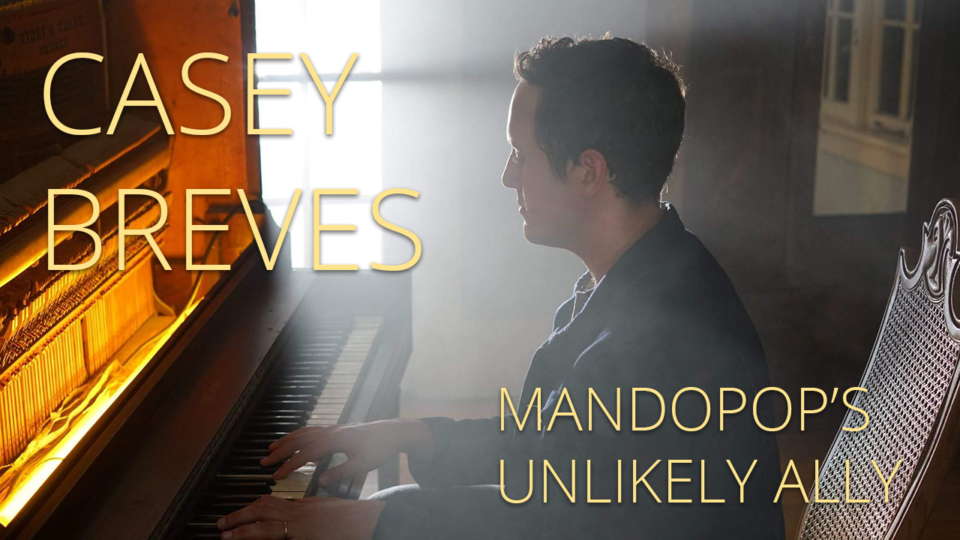 I’ve always been a fan of YouTube sensation Casey Breves. With his dulcet tones and masterful craft, he’s been making rounds on the internet with his collaborations with husband Sam Tsui and other influential YouTubers, creating original content and mashup covers that are seamless and of another breed altogether. Yet it had never occurred to me that my love for his music could intersect with my passion for Mandopop until he released a cover of Jay Chou’s ‘告白氣球Love Confession’ in early March with Kurt Hugo Schneider and Jasmine Clarke.

With the exception of Asian American influencers such as Jason Chen who have hopped onto the Mandopop bandwagon, Breves’ and Schneiders’ involvement in this project came as a pleasant surprise for me, as they seem to be the first Western acts to show any interest in the Mandarin music scene.

My attention diverted to Breves in particular, as I soon realised that he was no beginner at speaking Mandarin. His crisp pronunciation encouraged me to dig deeper, until I found yet another cover he had done a few years back, of indie singer-songwriter Bai An白安’s breakout hit ‘What Led Me To You 是什麼讓我遇見這樣的你’ which he professed to be one of his favourite songs. As my excitement levels peaked, I immediately drafted an email to invite the talented artist to share a little about his lesser-known interest in Mandopop and bridging cultural gaps with us.

Despite our chat being addled with technical difficulties, the enthusiastic vocalist openly discussed how his interest in Mandarin stemmed back from his university days at Yale, furthered by a grueling and intensive summer spent learning Chinese in Beijing. While it’s more widely known that he was part of their critically-acclaimed Acapella group The Duke’s Men of Yale, few know that he actually studied Mandarin during his time there as well, and naturally has always been interested in combining his love for music and the language.

“When I spent summer in Beijing, I listened to the radio and we went out to the clubs and got to hear a lot about what Chinese pop music was. It was always really intriguing to me to learn some of the songs and be able to sing in that language… it’s just fun because it’s a whole different other challenge, to be able to really convey the meaning of music in a language that’s not your first language is always really exciting and different.”

Breves even shared that the very first Mandarin song he ever learned was Teresa Teng鄧麗君’s ‘The Moon Represents My Heart月亮代表我的心’, opening pathways for him to further appreciate Mandarin pop music. Indeed, all this cumulated in the popularity of his collaboration with Kurt Hugo Schneider and Jasmine Clarke on Jay Chou’s ‘Love Confession告白氣球’. He gave us a little insight into how the collaboration came together to begin with:

To date, the cover has over 1.2 million hits on Kurt Hugo Schneider’s YouTube, and has certainly brought both Casey and Jasmine’s bilingual abilities to a wider audience. The bubbly vocalist even shared his concerns about singing in Mandarin for such a large audience with us.

“Jasmine and I-neither of us, obviously are-native mandarin speakers, so we both wanted to make sure that we were doing the best pronunciation we could and performing it as well as we could. So we were like ‘okay, lets correct each other if you notice any mistakes we’ll just correct each other and make it work’, but we had a lot of fun, I think we both loved doing it and loved getting to know a little bit more about Chinese pop music.”

Breves’ involvement in this particular collaboration was intriguing especially due to his audience being primarily based in the West, putting him in a unique position to bridge the gaps between the West and the East. Indeed, the thoughtful, bilingual creative who has been involved in various viral music projects over the years provides a perfect platform for discussions of cross-cultural collaboration to occur. He shared that feedback from his audiences unfamiliar with Mandopop has been overwhelmingly positive despite his initial concerns.

“I think it’s really fun, I obviously was a little scared because I know my pronunciation isn’t perfect and I was hoping that I could do the song justice that people would like them and the response has been really really positive and really sweet …I have a lot of fans that are in the US, they’re also in the UK, and France, and Germany and the Netherlands… some of them are older fans in Western Europe who I think have never really heard Chinese pop music or Asian pop music at all, and they’re like ‘oh! I don’t understand it but it’s really beautiful, I really like this song, this is great, I’m going to look up the original’ and that’s really exciting to hear. I think that’s a really important thing, to help facilitate that cross cultural musical moment.”

‘Fun’, ‘exciting’ and ‘really’ were terms that came up multiple times in my 40-minute conversation with Breves, who readily and enthusiastically emphasized his willingness to take on new cross-cultural experiences. By the end of our Skype session, I had already managed to persuade the talented vocalist and songwriter to attempt more covers and original writings in Mandarin (I’m holding you to that Casey)!

“I’ve written in Chinese academically and I’ve written essays in Chinese and stuff, but I feel like writing a song it has to be really personal, and you choose exactly the right words, and I’d probably want a little bit of help with that. But yeah, I’m open to it!”

Breves’ interest in breaking down cultural barriers however, extends itself past the confines of Mandopop. Having previously performed extensively in French too, and with some knowledge of K-pop, J-pop, Indian and even Vietnamese pop, the global citizen is all for a future where popular music is a global rather than primarily western cultural product.

“I think there’s so much incredible music and culture coming out of so many parts of Asia right now… there’s so much amazing stuff happening in Asia, and I think more and more audiences in the United States and Europe are aware of that and open to it. But the more that we can do to bridge that gap I think the better, and I’m always excited to learn new music… I know that American pop music has been popular internationally for a long time, but I definitely think it’s time that we started listening more to what’s coming out of countries in Asia and other countries.”

With K-pop making more of a splash in the West lately, Breves’ interest in Mandarin music in particular renders him an even more unique figure in an increasingly globalized and new media-driven pop culture scene. Given the lesser demand for Mandarin pop music in the global market, Casey’s passion and authentic interest in the genre has even more space to shine through, rendering the related works he produces even more heartfelt and effective. Although in all honesty I would never be caught listening to ‘Love Confession’ in its original form in public, Casey, Kurt and Jasmine have truly added another deeper meaning to the song with their thoughtful and atmospheric rendition, instilling a great amount of hope and positivity in me with every listen. After speaking with Casey especially, I’m rejuvenated with new hope for a future that is filled with more acceptance and cultural gap-bridging, and hope for a new breed of artists and influencers who truly create for the right reasons.