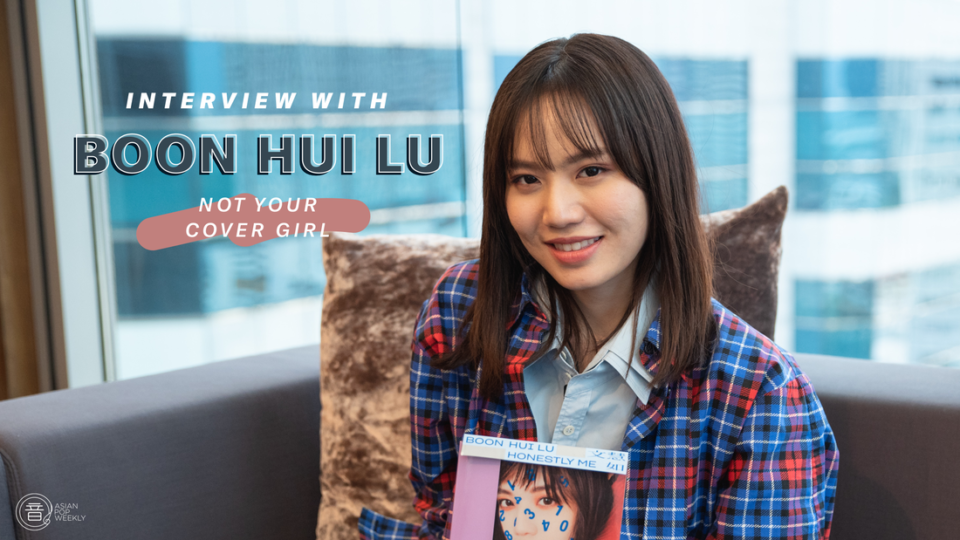 Interview with Boon Hui Lu 文慧如 – Not Your Cover Girl

Although you may know her from her internet-breaking covers of ‘Stranger In The North漂向北方’ and ‘Meeting You 剛好遇見你’, Singaporean Mandopop singer Boon Hui Lu 文慧如 is much more than just a cover singer.

Having proved her clout as a vocalist and influencer through these works, AND her creative talents through songs penned for Hebe Tien and Joanne Tseng, the 25 year-old has recently come into her own with her first original album “Honestly Me親愛的你_怎樣的我”; representing an eclectic mix of works highlighting different sides to her personality.

When we caught up with her on her last trip to Singapore, the gracious and playful artist showed that strength truly comes from within, chatting with us about the trials and tribulations of making the leap to becoming a singer-songwriter, and birthing her debut original album.

In particular, she spoke about the decision to take her old YouTube covers offline temporarily, in an effort to start with a clean slate and have audiences get to know her all over again:

“Of course everyone wants to keep listening to my covers, but I didn’t want to put the focus on covers, what if I release new works and they are still listening to my old stuff on YouTube?  So I think it was quite a daring move, to temporarily take all my old works offline, so that everyone can know that I am putting out new works. During this of course I was conflicted, because I was worried everyone would be unhappy.”

Although taking down the covers to make room for new growth seems like a relatively logical and easy decision on her part; Hui Lu’s millions of views on these cover videos (46 million and counting on her cover of ‘Stranger in the North漂向北方’) and the hundreds of thousands of subscribers she’s amassed as a result tell a different story; highlighting her driven nature as an artist.

Unwilling to rest on her laurels, the young singer-songwriter’s words belie a maturity beyond her young years. When asked if she worries about whether her new, original works will be as impactful as her covers, her down-to-earth expectations endeared her even more to us.

“I am actually not too worried, because I know that they won’t be more popular than my covers (laughs). Because … new songs have their own level of difficulty… I don’t expect that the moment I release it for it to have the same level of success as my covers. But I created this album from a more laidback perspective. From a new identity, just like when I first started doing covers… slowly allowing everyone to learn more about my works.”

Indeed, this is a new start for Boon, and one that requires her to look beyond the instant gratification of numbers and virality. As such, the theme of her album, which is to showcase different faces of herself is extremely fitting. And of course, if your songs are about different faces of yourself, it’s certainly not easy to pick favourites…

“I honestly don’t have one (track) that I particularly like, because they’re all part of me. I like them all. But if I have to choose one, probably ‘Dear. 親愛的你’*, because the meaning is rather special to me.”

In particular, another song of hers ‘Honestly Me怎樣的我’ really spoke to me as an uplifting and soul-searching track which would aid many a millennial in their ever-present existential search for meaning. Yet for Hui Lu, it had a deeper, more personal meaning too.

“’Honestly Me怎樣的我’represents the feeling of young people when they’re becoming part of society. So what I was thinking when I wrote this song was from the point of view of a cover singer transitioning to a singer-songwriter.”

But before Hui Lu closes the door on the cover song chapter of her artist career, we had to hear from her on what it takes to stand out amongst the clutter as an internet influencer, or a creator in general. Turns out, her best advice is to just be yourself.

“if you really want to become a popular internet personality, then you need to find something unique about yourself. A part of you that is very different to others…for me I really like singing, but I also have some new ideas for the songs. So I put these two ideas together and presented it on the internet and this is unique, so afterwards I feel like this might be why I got so much attention.”

During the interview, the jovial singer-songwriter even revealed that she used to act back in the day, showing off yet another lesser-known side to herself, and exposing her openness to  new challenges in the process.

“When I was young I did act, but after high school I put my focus on music. So if I see a good script I will like it and want to act in it. (laughs). I can act as a good person. Bad person… Princess. All can.“

Always humbled despite the apparent weight of all her accomplishments, Boon takes it all in her stride; good reviews, keyboard warrior comments and all. She shared that the worst thing she had ever been called on social media was a “cover dog”, but heartily laughed it off.

Resilience is a lesser-known characteristic that is extremely necessary as a musician and artist; and Hui Lu’s ability to shake it off and learn from her mistakes show that she truly has the makings of a creative powerhouse.

Anyone can tell that this sweet singer’s future is bright, but it is her slow-and-steady nature that will get her to where she needs to be. Boon is not just anyone’s cover girl (in many senses of the word); but is a grounded creative through and through. And for that, we have the utmost respect.

This interview was done in partnership with KKBOX SG’s program ‘Guerilla Attack’. This article can also be found over on their website. Check out Hui Lu’s music on her YouTube or available on all main streaming platforms.