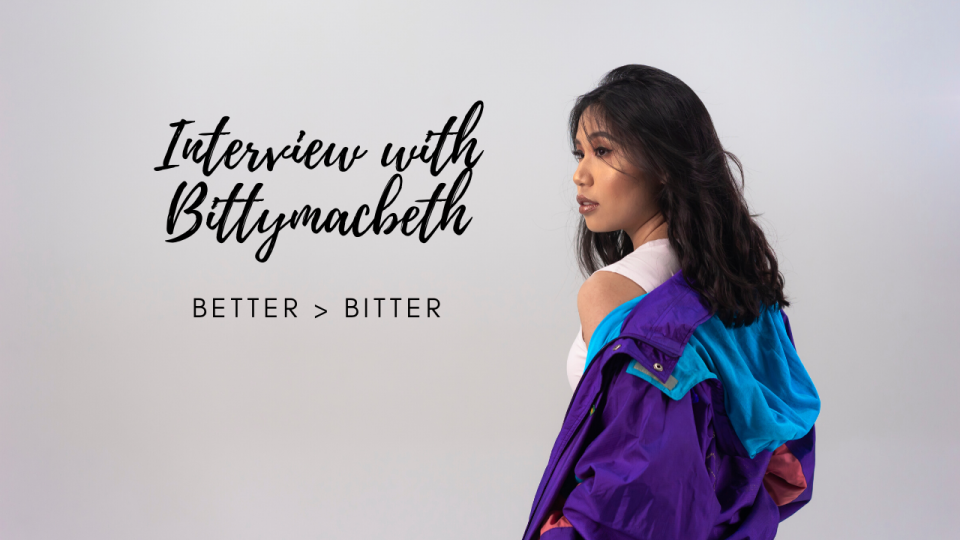 Introspective, insightful and strong-willed, Singaporean singer-songwriter Bittymacbeth (aka Beth Yap) is a female creative force to be reckoned with. On top of the freeing nature of her chill mishmash of Funk, Soul and R&B, Bitty’s works are in fact seeded deep with meanings both personal and relatable.

Empathetic as she is self-aware, the 26 year-old digs deep into her trove of experiences and stories, distilling them down to meaningful, intimate gems on her latest EP “BETTER NOT BITTER”.  She describes the EP as a loose exploration of “the five stages of grief, but in the concept of life instead of death”.

“Definitely at times, I’ve been salty and that’s why I had to tell myself I need to get better. And a lot of times I write music not just to express myself but also to remind myself to live better… And also serves as a really quick reminder to other people and let them know that if they’re struggling with the same things that they’re not alone.”

For Bitty, music is less of a stream-of-consciousness therapy source, and more of a reminder-to-self to stay true to her values. The title track ‘Get Better. Not Bitter.’ was inspired by a bad experience with a friend which ended up with the both of them almost being stranded in a foreign country.

Whilst most might just write this off as a ‘shitty experience’ and leave it at that, Bitty channels her frustrations, conflicts and hopes for herself and others into her music in a way that only she can.

“Writing ‘Get Better Not Bitter’ reminded me that I don’t want to be the kind of person that that person was to me because I think that person was probably coming from a place of resentment and hurt…I just wanted to remind myself that the right thing to do was just to forgive this person and wish this person the best and also try and live my best with this person out of the picture.”

When I complimented Bitty’s mindset over the whole situation, she put it down to good ‘ol Asian efficiency, revealing her humble and grounded side. But given that it was International Women’s Day just a few weeks back, I nevertheless wanted to shine a light onto how it’s second nature for Beth to address these issues in her works.

“I’m more than an artist, I’m also a person that cares about these kinds of issues about empathy and how people relate to each other and help each other.”

Acknowledging the limited breadth of her own experiences and wanting her works to further act as a medium for change and positivity, Bitty set about creating the #BETTERNOTBITTER campaign to go along with her EP release, dedicated to telling the stories of other individuals who had every reason to be bitter about their circumstance, but actively chose not to. I was particularly inspired by the story of a sexual assault victim who suffered from post-traumatic anxiety disorder and went on to pursue a career as a children’s behavioural therapist.

“She had a really rough time because people didn’t believe her…I was there with her when she would have these fainting spells because she would get all this pent-up anxiety…knowing that she’s survived all that, she’s still trying to live and pursue her goals, I thought that was very strong of her and I wanted to show that.”

Through her music and her words, Bittymacbeth has shown herself to be a supporter of all women from all walks of life, even penning a song about her own insecurities about her identity and image ‘Beautiful In My Skin’. In learning more about the song, I quickly discovered that it was not just about self-love and women’s body image issues, but also about racism and sexism. After attending a talk by a white country artist in Nashville where advice given was to dye her hair blonde as dark hair is unflattering, Beth began to question how she fit in to these unrealistic beauty standards.

“It was a reminder to me that I am still so very foreign and the ‘other’ where I was, and I questioned whether I could truly be accepted for who I am, not just as an artist, but as a person, do I also have to dye my hair blonde? I’m very tan…and I was thinking back even to my experiences being here and always being told, ‘oh why are you so black’, and someone also told me ‘you look fairer now, you look prettier’ from a Chinese person who’s also not very FAIR. So I just wanted to write that song about what it really was to be a woman of colour in the US or any place where you are the minority in more than one way…”

With an offbeat brand of sass that endears and an undeniable talent for telling stories and exacting change through her music, Bittymacbeth is one artist to look out for, especially as she releases her latest EP. Constantly pushing for change both within herself and for the world around her, we believe her perspective and scope will continue to grow along with her burgeoning potential as an artist and musician; allowing her to show even more audiences that being better is always more important than being bitter.