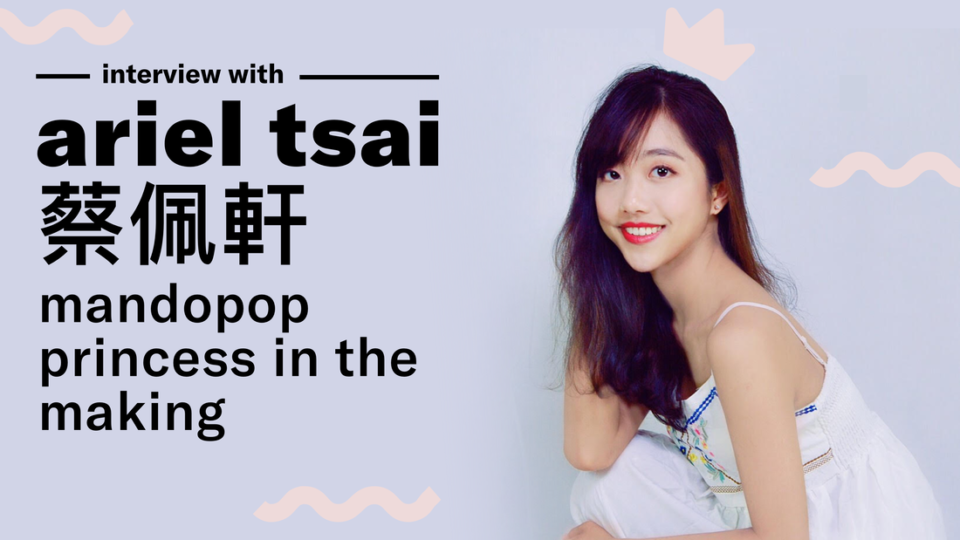 If Eric Chou is the new-gen prince of Mandopop ballads, then Taiwanese-Canadian singer-songwriter Ariel Tsai might just be the next princess. Topping the charts consistently with her selection of original and cover songs over the last two years, the 23 year-old who made a name for herself with weekly music livestreams has been one to watch as she effortlessly charms the thousands of fans who follow her with her soothing voice and graceful piano playing.

Born in Taiwan but having spent half her life in Canada, where she eventually settled to finish high school and university; the singer shared her experiences as a third-culture kid and the difficulties she faced in gaining a sense of belonging while growing up.

“For a while I had this identity confusion. ‘Cos you feel like you don’t truly belong to one place. but I guess a lot us we long for a sense of belonging deep down. And at the end of the day I realised I can be both Canadian and Taiwanese; I don’t have to be just one and this is what makes me ME. Because they both have a very special place in my heart.”

​Now based in Taiwan and settling in for the long haul, Ariel tells us the story of how she managed to navigate the landscape of the Asian music industry while based in Vancouver over the last two years; a feat that few have ever tried, let alone succeeded in.

“It was the start of livestreaming on their (台灣達人秀TTSHOW.TW) Facebook so they randomly called anyone they could think of (to invite them to livestream on their platform) and I was one of the people they called. And I thought I would just give it a shot, just once because it required me waking up at 5am. And for some reason …the livestream had higher viewers than others and the boss kept calling me saying, ‘you have potential in you therefore you should do the livestream like three times a week’…it takes a lot of determination to say yes to waking up at 5am 3 times a week (laughs).”

Despite the arduous process, Tsai kept at this for over two years, despite juggling the pressures of finishing pharmacy school and trying her best to advance her musical career amidst timezone differences.

“It was actually very tiring because pharmacy was very busy… I remember waking up, doing my livestreams and then I would pass out for like ten minutes on the ground…and after ten minutes I had to wake up, go to school for exams” she says, all without a hint of negativity in her voice.

​Indeed, even in times of duress or when she’s at existential crossroads, Tsai faces each situation with serenity and grace and a smile on her face; always believing in the light at the end of the tunnel.

Harbouring a passion for music since she was young (her parents tell her she started humming and creating original melodies at the age of 3!), Tsai wrote her first song at the age of 14. Drawn to the ballads that she loved during her adolescence in Taiwan by the likes of S.H.E and Jay Chou, these influences have shaped her music and philosophy even during her time overseas; allowing them to morph into something beautifully unique yet familiar at the same time.

Generally, Mandopop ballads are hit-or-miss for me. It’s not that there’s anything wrong with them, it’s just that they’re done a little too often for my liking. Yet there is still something so relatable and intimately touching about ballads that is timeless and irresistible when done right, and this is the magic that Ariel’s had her heart set on from the start. You’ll find that much of her repertoire including original singles ‘Blessings禮物‘ and ‘每一次想你 Every Time I Think Of You‘ have those similar magical feels you’d get from listening to Mandopop ballads in the early 2000s.

And yet, while Ariel finds herself particularly influenced by these Taiwanese ballads, her dream is in fact one that we at Asian Pop Weekly too hold close to our hearts-bringing Mandopop to the world! While based in Canada, Ariel drew attention for her passion for Mandarin music and turned it into a productive experience of sharing her music wholeheartedly with her friends and peers.

“A lot of times my friends would be like ‘oh I like this song you’re singing even though I can’t understand’ and I’m like ‘You know what? Yeah, this is Mandarin music, this is awesome music, more people should appreciate it and should listen to this’…If Mandopop could be more widely appreciated around the world I think it would be an amazing thing…”

Over the course of our chat, Ariel expressed her gratefulness for the support of her friends and family multiple times. And it is through her valuing of community that have shaped her vision for a more harmonious and diverse world through pop culture.

“My dream is to make Mandarin pop music more international. And as a female too, I feel usually it’s the males dominating music. If you even look at world pop music it’s always more males so I hope, I hope (I can make it). I’m really inspired by Taylor Swift and Ariana Grande!”

Although the road ahead for Tsai is long, she knows what it’s going to take and is prepared to give it her all. Working hard and always with that sweet smile on her face, it’s hard for anyone to not wholeheartedly wish for the best for her as an artist and musician. Having accomplished so much in the short space of two years, Ariel still remains as humble and grounded as ever. And these are precisely the qualities that I know will help this pop princess in the making achieve her dreams.

Check out Ariel’s latest single ‘Every Time I Think Of You每一次想你’ out on all major streaming  platforms now, and don’t forget to check out one of her upcoming livestreams on Facebook or YouTube!